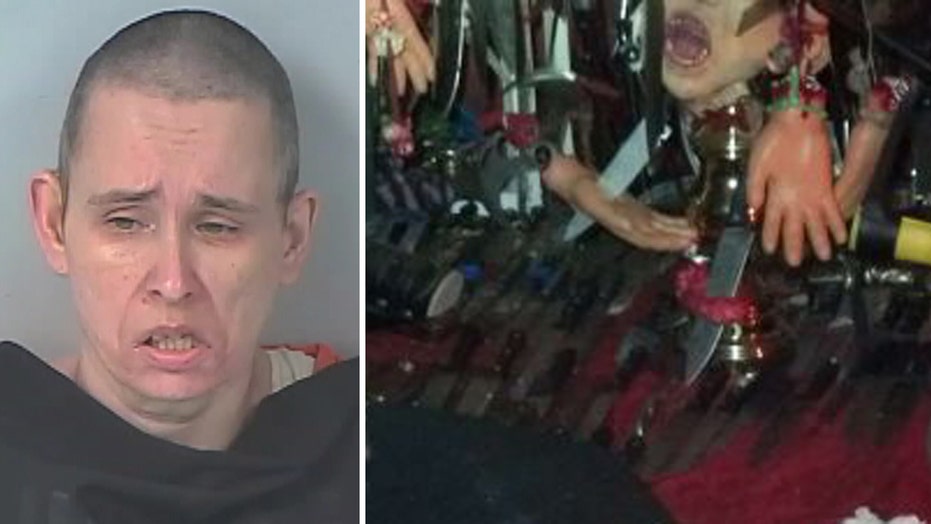 A Florida woman was arrested Tuesday night after she tried to stab a deputy with a large sword or machete inside a mobile home filled with thousands of other bladed weapons, authorities said.

The Hernando County Sheriff’s Office said in a news release that deputies went to Nickole Dykema’s Brooksville home to assist probation and parole officers who were trying to issue felony arrest warrants at around 10 p.m.

Dykema was seen looking at law enforcement officers through a broken window in her home, but refused to come out and disappeared back into the residence, according to a news release. Once other deputies arrived, officers forced their way into the home and were met by Dykema who had a large sword or machete in her hand, according to the release. She tried to stab one of the deputies and missed his face by inches.

The Tampa Tribune reports authorities surrounded Dykema after she was seen hiding behind a blanket. Officers say they fired a bean bag at her, but it had no effect.

The newspaper reports Dykema fled into a room filled with about 500 bladed weapons. Authorities noticed there were other rooms filled with similar weapons and another room that contained an altar covered in pentagrams, according to The Tampa Tribune.

Authorities said Dykema advanced toward deputies armed with several more weapons and she was shot with another bean bag after she refused to drop them. After retreating back into a hiding spot again, Dykema emerged and was ordered to show her hands and turn around. Dykema reportedly turned as if she was going to go back into the home and was subsequently shot with a stun gun.

The Tribune reports Dykema was taken to the Hernando County Detention Center where she was being held without bond.  She was charged with assault on a law enforcement officer, resisting arrest without violence, property damage/criminal mischief and three counts of violation of probation.

Deputies said they had removed more than 3,500 "bladed instruments" from the home.

“This person was obviously dangerous to the community,” said Hernando Sheriff Al Nienhuis. “It amazes me that there deputies were able to take her into custody without being injured.”