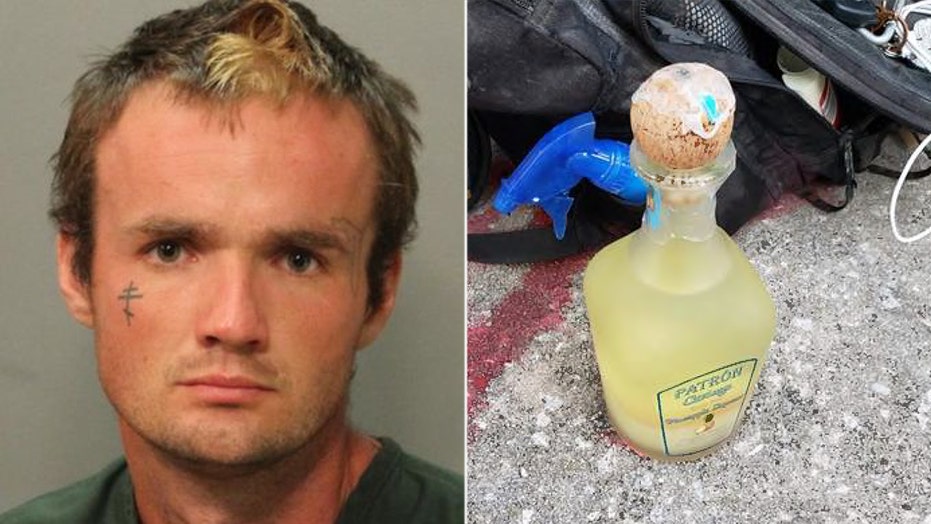 A convicted felon has been charged by federal prosecutors with possessing a Molotov cocktail at a Florida George Floyd protest.

The charges stem from Ivan Jacob Zecher’s arrest by Jacksonville police on May 31 after a peaceful protest in downtown Jacksonville turned violent, the Florida Times-Union reported Monday.

He was charged Monday in federal court with possessing a firearm as a felon and possessing an unregistered firearm, Jacksonville U.S. Attorney Maria Chapa Lopez said.

Zecher, 27, was accused of being part of a group of protesters blocking traffic and throwing items such as water bottles and rocks at police officers and cars.

Mugshot for Ivan Zecher. Prosecutors released a photo of the Molotov cocktail they say he was in possession of at a George Floyd protest in Jacksonville May 31. (U.S. Attorney's Office Middle District of Florida)

“After refusing orders to disperse, Zecher was arrested by officers from the Jacksonville Sheriff’s Office for unlawful assembly,” Lopez said.

A subsequent search of his backpack “revealed a liquor bottle that smelled strongly of gasoline, a lighter, and a hatchet,” she said. “Zecher admitted that he was holding the bottle in his backpack for an associate, and that he knew the bottle contained gasoline.”

FLORIDA SHERIFF TO LOOTERS: I'M ADVISING ARMED HOMEOWNERS TO 'BLOW YOU BACK OUT OF THE HOUSE WITH THEIR GUNS'

The bottle containing the gasoline was plugged with a cork coated with polystyrene, Lopez said.

Zecher was designated a convicted felon after pleading guilty in 2014 in a case in which he was charged with aggravated assaults with a deadly weapon, the Time Union reported.

A woman who said she was Zecher’s fiancée told Fox 30 Jacksonville that Zecher was a “pillar” of his family.

She encouraged “everyone to remember the principles of our Constitution innocent until proven guilty,” the station reported.