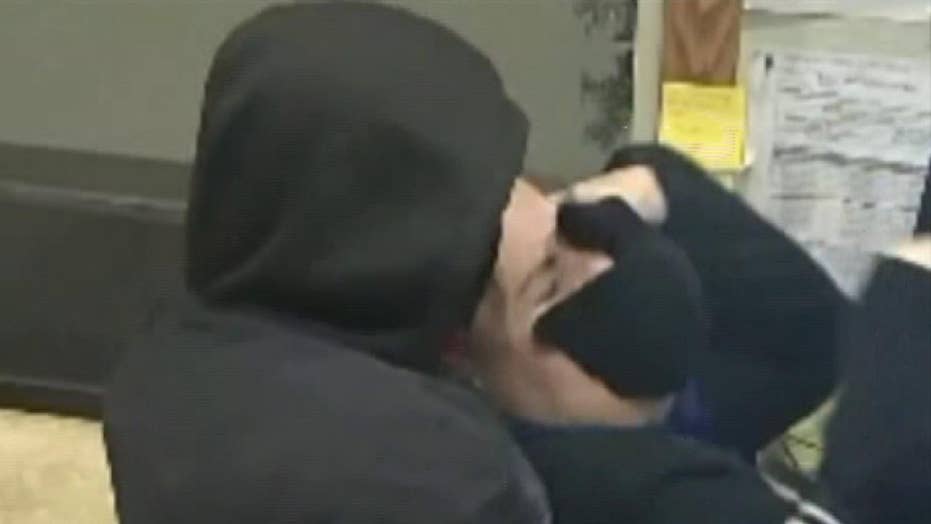 A Florida hotel clerk was lucky to escape after she was captured on video fighting off a masked man who held her at gunpoint while demanding she open the cash register in a near-five-minute struggle.

Davie police released Wednesday the dramatic video of the attempted robbery in hopes of arresting the unidentified assailant, who fled the Dec. 22 incident at Woodspring Suites empty-handed.

The clerk was working her shift around 4 a.m. when the man — wearing a black hooded sweatshirt and a mask covering part of his face — entered the hotel and pulled out a gun. The man was captured on video jumping over the front desk, grabbing the clerk and covering her mouth to prevent her from screaming.

“However, the employees do not have the combination,” Leone said.

The man then demanded the clerk open the cash register, but she refused and attempted to pry herself out of her attacker’s grips. She eventually spotted a hotel guest and screamed for help, prompting the man to let go and flee the scene.

“We believe that her screaming after she saw this other guest in the hallway scared off this individual,” Leone said. “But we don’t recommend that anybody fight back in a situation like this.”

The hotel guest told WSVN he was throwing out the garbage when he heard the screams.

“We were going down to throw the garbage out and check the weather,” the unidentified guest told the news station. “We heard her screaming, and then he jumped the counter. In his hand was a gun, we saw that in the video.”

Leone said the woman is okay but still fears for her life.

“She was traumatized by this incident. She’s still in fear for her life, as you can see the video lasted over five minutes of a struggle,” Leone said. “It’s a very long time, and it’s very brutal.”

Police described the attacker was a man believed to be in his 20s with a medium build, between 5 feet 10 inches and 6 feet 1 inch tall.

Anyone with information is urged to call Broward County Crime Stoppers at 954-493-TIPS.