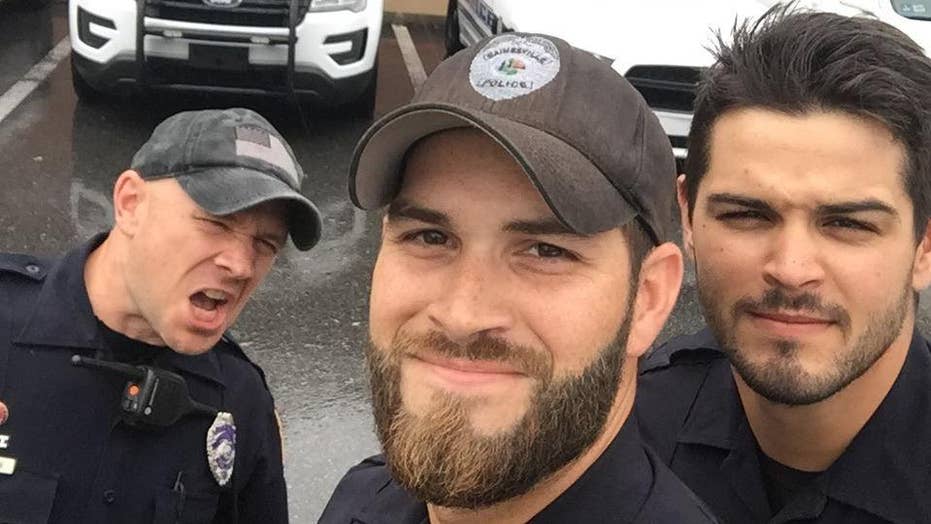 Gainesville police officers have thousands of fans after posting photos to Facebook during Hurricane Irma. The cops plan on using their newfound fame to help with relief efforts in the Sunshine State.

Officers from the Gainesville Police Department in Florida have thousands of new admirers after posting photos of themselves on the department’s Facebook page.

As Irma battered the Sunshine State with heavy winds and rain, officers documented how they were responding to the storm on social media. John Nordman, Michael Hamill and Dan Rengering snapped a photo of themselves before their shift on Sunday.

The post went viral because of the officers’ good looks. The snapshot has gotten more than 503,000 reactions and more than 270,000 shares as of Thursday morning.

In a comment, one woman called the three officers “hunk-a-potamases.”

“The hunkapotumus is a rare, elusive, and mythical creature,” one woman wrote on Facebook. “Here we are lucky to see 3 huddled together in the wake of Hurricane Irma. I'm a well-trained hunkapotumus handler. Send them my way and they will be well taken care of.”

The department put out a statement after the photo went viral urging people not to call 911 in order to get the easy-on-the-eyes officers to respond to their homes. The officers also received messages from friends, family and admirers about their newfound social media stardom.

Hamill who is married, says his wife did not like all the extra attention at first. But, eventually, she gave in.

“At first she [was] not about it, she didn’t like all the attention and all the craziness,” Hamill said. “Now she’s come around and realized there’s nothing she can do.”

“Honestly, I had to turn my phone off last night,” Rengering told Fox News. “It’s been excessive,” he said with a smile.

Nordman, who is pictured in the far left of the viral post, is married. He was unavailable for comment.

The trio were not the only ones getting attention and comments on the department’s Facebook page. Many people wrote about the looks of other officers whose pictures were posted on the department’s timeline. Officer Bylynn Hatcher says he caught the eyes of admirers and was given the nickname “sexy chocolate” after posting a photo of himself in front of his patrol car.

“The best [comment] I’ve probably seen is: ‘OK, there’s the chocolate we want,’” Hatcher said. “That kind of made me laugh a lot.”

Hatcher, who is also single, was a model before becoming a police officer.

The Gainesville Police Department plans to create a calendar featuring the officers to raise money for Hurricane Irma relief efforts in Florida. In preparation for the calendar, the three men showed off their workout routines in the department gym to a group of reporters. They all plan to beef up their workouts before the big photo shoot.

“We’re just excited about the fact that we’re going to get to do a calendar that’s going to raise a lot of money,” Rengering said. "Hopefully, we’ll be able to help a lot of people that [were] impacted by Hurricane Irma. That’s really what we’re most excited about.”