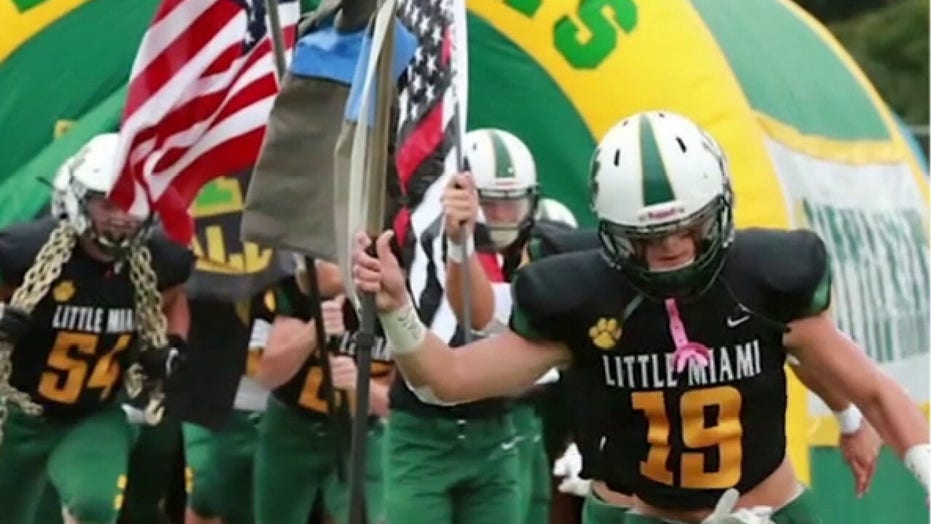 High School football players Brady Williams and Jarad Bentley explain what was behind their decision to carry flags to honor 9/11 heroes.

A thin blue line flag has been banned by a local high school in Neptune Beach, Florida following a series of complaints that circulated on social media, according to a report by News4Jax.

According to the outlet, the Fletcher High School football team started carrying the pro-law enforcement flag last year, as a way for one of its players, Caelan Lavender, to honor his late father, Cpl. Andy Lavender. Mr. Lavender was a Jacksonville Beach police officer who unexpectedly passed away in August 2019 after 29 years in law enforcement, and was active in sports programs.

“He was one of a kind,” his wife, Lorie Lavender, told News4Jax. “And he is very much missed and loved.”

The team's use of the symbol received swift backlash online, with some calling the move "openly racist."

Debate over the flag's meaning has come into question amid widespread protests against police brutality sparked by the death of George Floyd back in May. The flag is known as a pro-law enforcement symbol.

As a result of the backlash, Fletcher High School's principal, Dean Ledford, issued a statement announcing the flag would be banned.

"The flag, which is known as the Thin Blue Line flag, has different meaning for different people, and rather than representing the young man’s personal feelings, it was being interpreted as a political statement of the team and of the school," Ledford said. "In consultation with the coaches, I determined that the act of using this flag in this personal way, while in the context of the football game opening ceremony, could easily be construed as representing a political position of our school and not just the personal feelings of the student and his teammates. Therefore, I have determined that it is no longer appropriate to continue."

Ledford noted that he is "in conversation with the student and his teammates about ways they can appropriately express their personal views."

"As the principal of Fletcher, I greatly appreciate our School Police, Jacksonville Beach Police, Atlantic Beach Police, Neptune Beach Police and the Jacksonville Sheriff’s Office for their work in protecting our school and our community," Ledford added. "As a public school, we must take great care in maintaining an objective position on various political issues. Our action in guiding the student and his teammates to an appropriate way of expressing their personal views should only be interpreted as an action to maintain the school’s role as a venue for constructive dialogue, and not a proponent of any particular point of view.”

Mrs. Lavender expressed her disappointment in the school's decision, telling News4Jax that the display of the flag is neither political nor racist in her family’s eyes.

“We’re dealing with it as it comes,” she added. “Will still pay our respects to Andy.”

Lavender said that she just wants her son to follow his heart in honor of his father.

Steve Zona, President of Jacksonville's Fraternal Order of Police Lodge 5-30 and a coworker of Lavender, has pushed back against the school's decision, arguing in a Facebook post on Tuesday that the move was never politically motivated.

"Don’t let people make this political or about “these trying times.” It’s about Andy and his son. Period," Zona wrote. "It was never political until an evil person made it so."

Zona is encouraging his community to purchase tickets for the team's football games and to carry a sign that reads "I know Andy" to show support for the family.