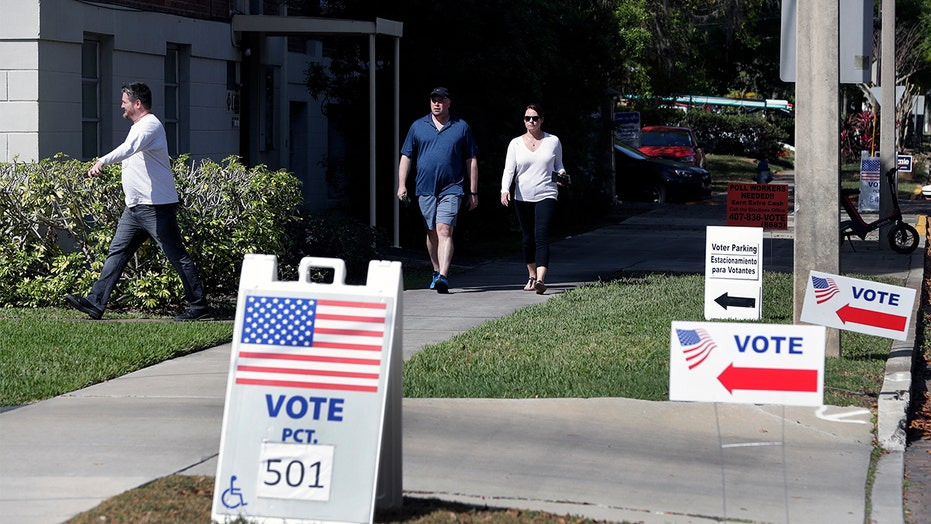 A divided federal appeals court on Friday upheld a 2019 law making it more difficult for 1.4 million Florida felons to vote.

The law requires felons, who won the right to vote in a state referendum in 2018, to pay all fines, restitution and legal fees before they can register.

The 11th Circuit Court of Appeals in a 6-4 vote ruled the law did not violate the Constitution’s due process clause.

The ruling casts more doubt on whether hundreds of thousands of felons will be able to vote in November. The deadline to become a registered voter in Florida is Oct. 5.

In this March 17, photo, voters head to a polling station to vote in Florida's primary election in Orlando, Fla. Florida felons must pay all fines, restitution and legal fees before they can regain their right to vote, a federal appellate court ruled Sept, 11. (AP Photo/John Raoux, File)

FELONS STILL FIGHT FOR RIGHT TO VOTE AHEAD OF FLORIDA PRIMARY

Floridians had voted overwhelmingly to give felons the right vote. Felons convicted of murder or sexual offenses remain ineligible.

“States are constitutionally entitled to set legitimate voter qualifications through laws of general application and to require voters to comply with those laws through their own efforts,” Chief Judge William Pryor wrote in the majority opinion. “So long as a state provides adequate procedures to challenge individual determinations of ineligibility — as Florida does — due process requires nothing more.”

Four judges issued a dissenting opinion. They argued in part that it is sometimes difficult for returning felons to know which financial obligations they may still have and that the state should create a mechanism to provide that information.

“In light of the chaos created by the majority’s holding that (financial obligations) must be satisfied according to the ‘every-dollar’ method, countless scores of individuals will be uncertain of their eligibility to vote,” wrote U.S. Circuit Judge Beverly Martin in the dissent.

“With its constitution amended in this way, Florida gained an obligation to establish procedures sufficient to determine the eligibility of returning citizens to vote, and to notify them of their eligibility in a prompt and reliable manner,” the dissenters added.

Florida is considered a must-win state in President Trump’s reelection bid and is famed for its razor-thin statewide election results. Democrats had hopes of gaining support from thousands of former felons in Florida.

The ruling is expected to be appealed to the U.S. Supreme Court by lawyers for felons named as plaintiffs in the case.