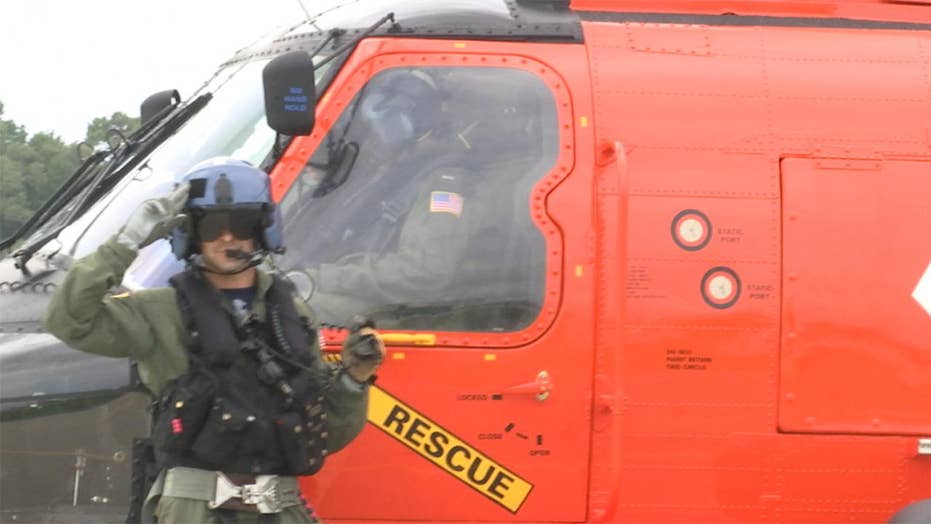 ELIZABETH CITY, N.C. – A few feet forward, and the Jayhawk helicopter strikes trees; a few feet to the side, and it hits power lines.

Coast Guard pilot Matt Delahunty, out of Elizabeth City, N.C., carefully hovered the aircraft over a flood victim’s home, where Steve Lewis stood on his roof waving an American flag as water rose to the second floor of the residence.

Carolinian Steve Lewis sits in a basket, after being hoisted up from his rooftop in Rocky Point, N.C. (Fox News)

“It came in fast,” Lewis told Fox News during the helicopter trip. “My house is pretty much a wreck.”

The crew’s demeanor remained even-keeled and confident throughout the flight, so it was hard to tell that this was their first roof rescue.

Johnson said urban rescues are a rarity for the U.S. Coast Guard out of Elizabeth City. About “99.9% of our cases are done offshore in the middle of the ocean with nothing else around,” he added.

In neighborhoods, crews have to maneuver around “snag hazards,” like trees, antennas and power lines. Darren Harrity, a rescue swimmer well known for his herculean-like rescues, said “there’s definitely adrenaline involved,” but not so much nerves. “We train for this type of stuff.”

After finishing a long day of successful rescues, Johnson’s eyes welled up, “I’m about to get emotional now,” he warned. “I hugged my kids pretty tight a couple of days ago when I got home. It’s just home, so it’s pretty emotional.”

“The area we were at today, I actually have family members that were impacted pretty severely from the storm, so it has a very close emotional tie,” Johnson said.

Historic flooding continues to shock Carolinians, as several rivers have yet to crest. (Fox News)

Delahunty agreed, saying once the adrenaline subsides from a rescue, the reality of fellow Carolinians’ condition really tugs on his heartstrings.

Delahunty embraced an emotional survivor, carrying nothing but a few trash bags, who said she doesn’t have flood insurance.

“At that moment, I wasn’t a Coast Guard officer anymore, I was just a fellow human being, so I asked her if I could pray with her and I prayed with her,” Delahunty recalled.

The crew is reminded during every rescue mission of the utter devastation in their home state – the helicopter providing “indescribable” views from above. But this team of four – Matt Delahunty (pilot), Lindsey Cockburn (co-pilot), Ryan Johnson (flight mechanic) and Darren Harrity (rescue swimmer) – told Fox News it is an honor to serve the community that has provided them with so much.

“It’s great to be able to give back to everything it’s given me,” Johnson shared.

Delahunty said this is what they signed up for. “We get to be part of a really cool, just really amazing opportunity to be an answer to prayer for people who, in many cases, have been stranded for days now,” he added.

With more than 3,000 Coast Guard members responding to Florence, crews have rescued 193 people and 91 pets in North Carolina as of Sunday evening; these numbers are expected to grow, as some rivers have yet to crest.