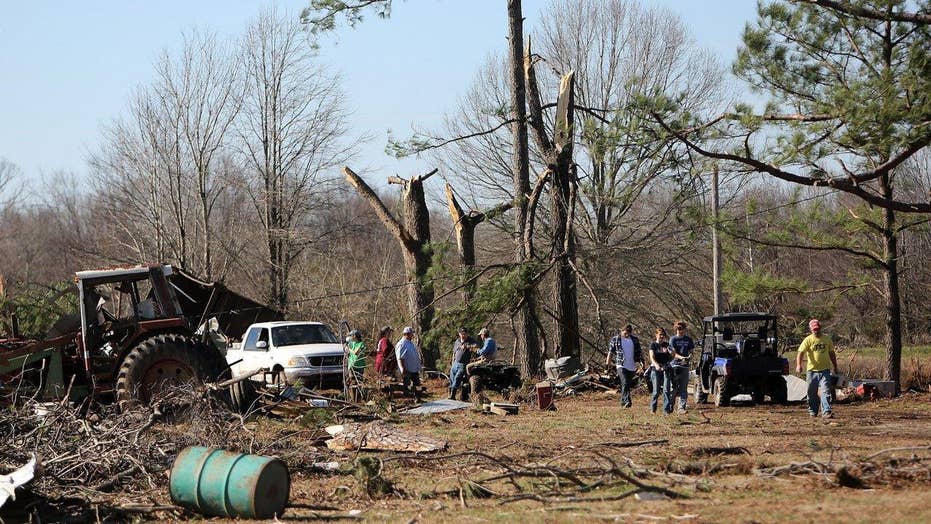 Deadly tornadoes rip through the South

Five people were reported dead near Garland, Texas, Saturday evening after at least four tornadoes spawned by severe storms touched down in the Dallas area, according to Fox-4.

Four of the people were reportedly killed in a weather-related incident" that may have been a traffic accident, the Dallas Morning News reported.

The Rowlett Police Department confirmed late Saturday that the fifth death on the same highway. It was unclear whether the fifth person died as a result of the same incident.

Severe tornado-producing storms caused heavy damage as they moved through north Texas, the latest in a series of deadly weather patterns that have affected the nation's heartland this week.

The National Weather Service reported at least four tornadoes touched down near Dallas — at least one of which caused major damage in the northeast suburb of Rowlett on Saturday evening, the News reported.

A number of homes were destroyed and others damaged in Ellis County, the area's emergency management director, Stephanie Parker, told Fox-4.

The Dallas area was also placed under a flash flood warning as a result of the severe storms.

Southwest Airlines told the paper that at least 12 flights headed to Love Field were diverted to other airports, and departing flights were experiencing delays. High water was also reported throughout the city.

The storms have also heavily damaged some homes in the area, including in the southern suburb of Waxahachie, where the storms began, the paper reported.

The funnel was spotted by witnesses outside Birmingham around 5 p.m Friday. An hour later the National Weather Service confirmed that first responders were on the scene along Jefferson Avenue, a working class neighborhood 10 miles from downtown Birmingham.

Several houses on the block had been destroyed and partially blown into the street, Al.com reported Saturday.

Luckily, Bell said there have been no reports of missing people, the station reported.

The city reached out to the Red Cross to assist residents whose homes were damaged.

Utility workers turned off electricity and gas in the area to permit house-to-house searches and rescue efforts.

Pastor Melvin Howard of the Mount Olive Full Gospel Church rushed to Jefferson Avenue when he heard the storm hit.

He told Al.com his church’s building had collapsed but no one was inside at the time.

“We’re just there to salvage what we can salvage,” Howard told the website. “Mikes and p.a. systems of that magnitude that we know someone would go in and take.”

As of Saturday, 2,800 Alabama Power customers were without power, including 1,900 in the Birmingham area, Al.com reported.

Saturday evening, the National Weather Service reported a tornado touched down briefly near Dallas, Texas. But, the Associated Press said it reportedly lifted off the ground before causing any damage.

In Birmingham, Ruthie Green went door-to-door in a coat and a bicycle helmet to check on neighbors after the storm and swept debris from her front porch as more emergency responders arrived in the neighborhood.

"I been listening to the news all day so I was kind of preparing," Green told the Associated Press. When the tornado warning came up on her iPad, Green said she ran to a closet.

"Then I heard the big roaring, it didn't last more than three minutes," Green said. "I just laid down and just kept praying."

Green said she was unsure of whether any neighbors had been injured or killed down the block where several homes were destroyed.

"We probably won't know anything until daylight comes," she said. "I'm hoping that everybody got out all right."

Elsewhere in the region, dozens of people faced Christmas having lost their homes and possessions. Alabama Gov. Robert Bentley on Friday issued a state of emergency for parts of the state experiencing flash flooding. Officials in southeast Alabama are particularly concerned, as Pea River is approaching record-levels near the town of Elba, which has a history of severe flooding.

Storms have already ravaged the Southeast this week. At least 18 people have died as the outbreak of severe weather trenched through Mississippi, Tennessee and Arkansas. The victims included a 7-year-old by in Mississippi who perished while riding in a car that was swept up and tossed by storm winds

Some people who survived the storms were thankful just to see another Christmas. Tony Goodwin ducked into a storm shelter with seven others as a storm pounded Tennessee and other states in the southeastern U.S. He emerged to find his house in Linden had been knocked off its foundation and hurled down a hill by high winds.

Goodwin's neighbors weren't so fortunate. Two people in one home were killed.

"It makes you thankful to be alive with your family," he said.

Peak tornado season in the South is in the spring, but such storms can happen at any time. Exactly a year ago, tornadoes hit Mississippi, killing five people and injuring dozens.

Barbara Perkins was told Thursday by an insurance agent that her storm-damaged home in Falkner, Mississippi, was a complete loss. But Perkins — who survived the storm hunkered down inside a closet with her husband — said she was happy just to be alive. Two neighbors had died in the storm that swept across the southeastern U.S. earlier this week.

"You kind of stop and realize what Christmas is all about," Perkins said.