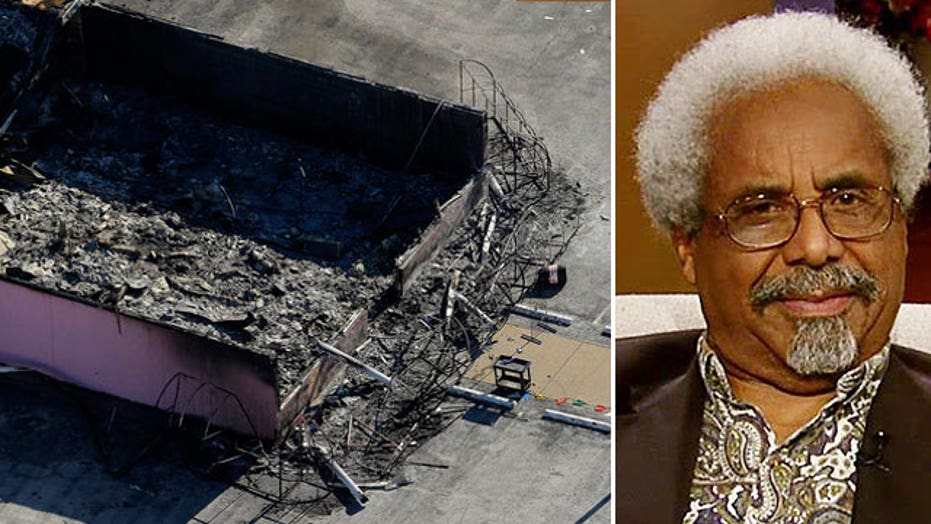 Rebuilding Ferguson: What needs to happen next?

Protesters forced three large malls in St. Louis to close their doors on one of the busiest shopping days of the year Friday, as other protests were held nationwide to protest a grand jury's recent decision not to indict Officer Darren Wilson, who shot and killed teenager Michael Brown.

The protests were organized on Twitter and other social media platforms using the hashtags #NotOneDime, #Blacklivesmatter and #Stlblackfriday, MyFox2Now.com reported.

Several stores lowered their security doors or locked entrances as at least 200 protesters sprawled onto the floor while chanting, "Stop shopping and join the movement," at the Galleria mall in Richmond Heights a few miles south of Ferguson, Missouri, where Officer Darren Wilson fatally shot Brown, who was unarmed, in August.

The action prompted authorities to close the mall for about an hour Friday afternoon, while a similar protest of about 50 people had the same effect at West County Mall in nearby Des Peres. It didn't appear that any arrests were made. Later Friday, the appearance of several dozen demonstrators led to the early closing of the Chesterfield Mall.

Small business owners told MyFox2Now.com that the protests were hurting them financially on a day they count on to make money.

Cell phone case salesman Abdullah Noman held out as long as he could, telling MyFox2Now.com, “Basically we’re losing a lot of business...I think we’re going to leave in a minute if we stay like that.”

Protests continued in Ferguson during the night leading to the arrests of 15 people for disturbing the peace and impeding flow of traffic. Two others were arrested with resisting arrest and the other with assault.

This stemmed after group of 100 protests marched down West Florissant Avenue in front of Ferguson’s police and fire departments.

The demonstrators began to chant, block traffic and stopping in front of businesses.

The protests, along with demonstrations in Chicago, New York, Seattle and northern California -- where protesters chained themselves to trains -- were among the largest in the country on Black Friday.

"We want to really let the world know that it is no longer business as usual," Chenjerai Kumanyika, an assistant professor at Clemson University in South Carolina, said at a rally at a Wal-Mart in Manchester, another St. Louis suburb.

Monday night's announcement that Wilson, who is white, wouldn't be indicted for fatally shooting Brown, who was black, prompted violent protests that resulted in about a dozen buildings and some cars being burned. Dozens of people were arrested.

The rallies have been ongoing but have grown more peaceful this week, as protesters turn their attention to disrupting commerce.

Mindy Elledge, who runs a watch kiosk at the Galleria, said it was working.

"I think people are afraid to come here," Elledge said. "With the protests going on, you never know when or where they're going to happen."

In northern California, more than a dozen people were arrested after about 125 protesters wearing T-shirts that read "Black Lives Matter" interrupted train service from Oakland to San Francisco, with some chaining themselves to trains. Dozens of people in Seattle blocked streets, and police said some protesters also apparently chained doors shut at the nearby Pacific Place shopping center.

In Chicago, about 200 people gathered near the city's popular Magnificent Mile shopping district, where Kristiana Colon, 28, called Friday "a day of awareness and engagement." She's a member of the Let Us Breathe Collective, which has been taking supplies such as gas masks to protesters in Ferguson.

"We want them to think twice before spending that dollar today," she said of shoppers. "As long as black lives are put second to materialism, there will be no peace."

Malcolm London, a leader in the Black Youth Project 100, which has been organizing Chicago protests, said the group was also trying to rally support for other issues, such as more transparency from Chicago police.