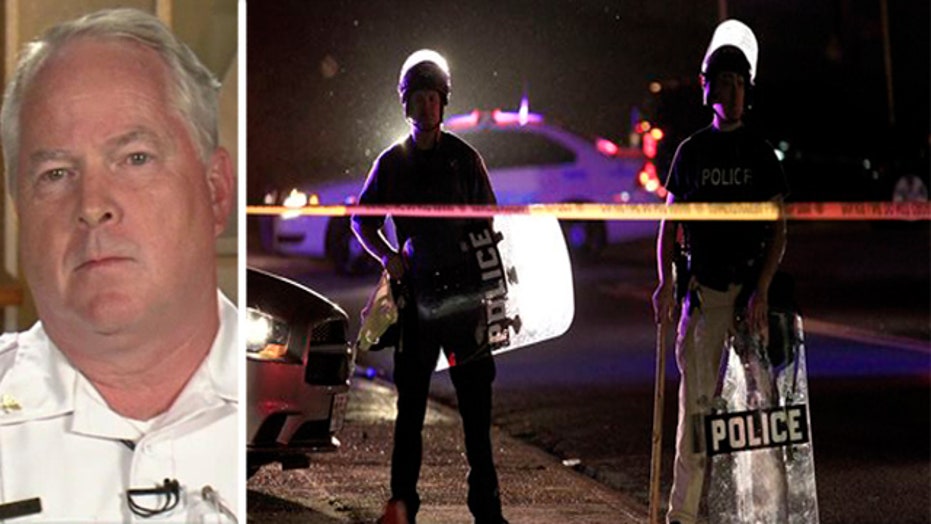 FERGUSON, Mo. – In less than a week, the nation's most embattled police chief has ceded much of his authority — first to county police and then to state troopers.

Thomas Jackson, the snowy haired leader of the Ferguson Police Department, has been the public face of the agency at the center of the violent protests over a white police officer's killing of an unarmed black teenager.

Jackson's leadership has drawn wide criticism, both for the aggressive police response to the protesters and for his agency's erratic and infrequent releases of key information.

"It's clear the Ferguson chief is overwhelmed by the magnitude of this incident," said Daniel Isom II, a retired St. Louis police chief who now teaches at the University of Missouri-St. Louis. "He has been releasing information as he sees appropriate, but maybe not taking into consideration the impact of releasing that information."

On Friday, Jackson identified the officer who shot and killed Michael Brown and simultaneously released store security video that police say shows the young man stealing a box of cigars and shoving a clerk only a short time before his death.

Protesters and members of Brown's family accused authorities of trying to deflect attention from the officer while smearing the dead teen's name.

"They want to take the heat off" Wilson, said Randolf Scott, 55, of Ferguson. "They're trying to do everything and anything they can to make this sound justified."

Jackson spent more than 30 years with the St. Louis County Police Department before taking over the 53-officer force in Ferguson, a mostly black city of 21,000, four years ago.

While working for St. Louis County, he led a drug task force and was also a SWAT team supervisor, airplane and helicopter instructor pilot, undercover detective and hostage negotiator.

He lives in nearby Hazelwood, one of a cluster of small cities just north of St. Louis known collectively as North County.

Since the Aug. 9 shooting, the Ferguson chief has continually spoken of a desire to work with community members. He's described efforts to bolster minority hiring in a department with just three black officers. But he's also struggled to manage a local crisis that has turned into an international news story, with 24-hour media coverage and a community filled with both grief and rage.

After the shooting, Jackson asked county police to take the lead in both the investigation of the shooting and in crowd control at the protests.

On Thursday, the governor put the Missouri Highway Patrol in charge of Ferguson security after local and county police used riot gear, tear gas and heavy artillery — which only seemed to inflame crowds of angry protesters.

Highway patrol Capt. Ronald Johnson said that he was not told ahead of time that Jackson would release the Ferguson officer's name or the information about Brown as a robbery suspect.

"I would have like to have been consulted," Johnson said Friday. "I really can't tell you about the timing. I saw it on the news like everybody else."

Jackson had planned to release the name of the officer who shot Brown on Tuesday but said he reversed course in response to a stream of death threats against officers, including Wilson.

Both he and St. Louis County Prosecutor Robert McCulloch had warned earlier in the week that it could be several weeks before the officer's name was made public, pending possible review of the case by a grand jury to assess criminal charges.

It was unclear what has since changed since then. Jackson took no questions about the information he had just released at a morning news conference, and then struggled to explain his decision-making at a later news conference. He never directly addressed why the timing had changed.

The apparent disconnect between local and county police and state troopers is both inefficient and unnecessary, Isom said.

"There are several agencies involved in this endeavor," he said. "It seems that everyone is on their own page. And that's not good for us moving forward."