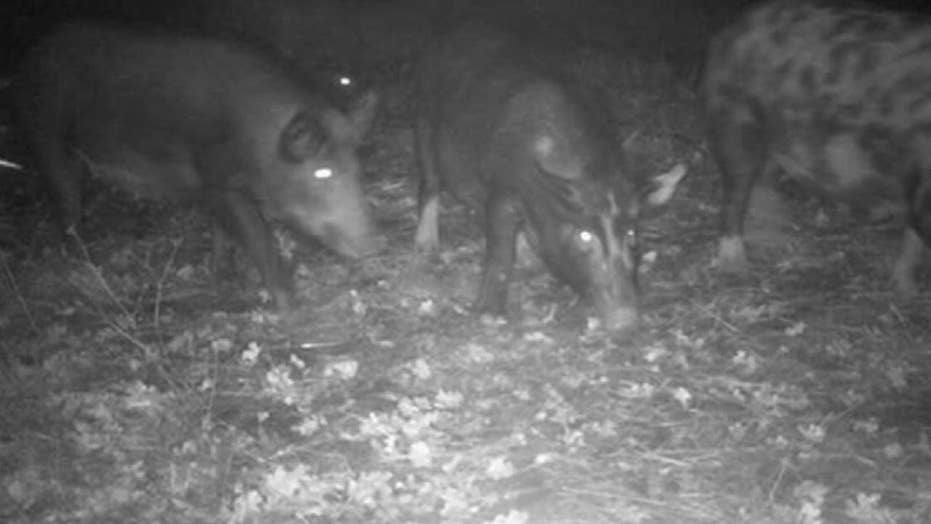 City of Lafayette hires a professional trapper to deal with feral pigs that invaded the town and are destroying large sections of parks.

Sections of a park in Northern California are now closed off with warning signs posted after feral hogs invaded the area in recent months, causing tens of thousands of dollars in damage.

The city of Lafayette said Tuesday in a news release the spike in the wild pig population in recent months has prompted the city to close some nature trails and post warning signs in order to protect residents from the "dangerous species" in the Burton Valley and Lafayette Community Park areas, located about 20 miles east of San Francisco.

"We've had a couple of encounters where the off-leash dogs have spooked a pig, and they came close to humans aggressively," Jonathan Katayanagi, the director of Lafayette Parks & Recreation, told KTVU on Wednesday.

FERAL HOGS HEADED FOR US FROM CANADA; WILDLIFE OFFICIALS WARN OF WIDESPREAD DAMAGE

City officials said that as many as 40 feral hogs have been roaming through the park around dusk and dawn since October, destroying large sections of the grounds as they tear through areas looking for grubs, worms, and acorns. A fence has kept the pigs off baseball and soccer fields already under repair, but other sections of parkland have not been as fortunate.

Around 40 feral hogs have been roaming through parks in Lafayette since October, causing tens-of-thousands of dollars worth of damage. (City of Lafayette)

The damage from the wild pigs is estimated to be around $50,000 and forced the city to hire a licensed trapper to control the invasive population while coordinating efforts with the Lafayette Police Department and California Department of Fish & Wildlife

"The trapper we are working with is hoping to use a corral system so we can control large groups,"  Katayanagi told KTVU. "After that, (California) Fish & Wildlife can dictate what is to be done with the pigs. But we are told relocation is not an option."

The pack of feral hogs have been tearing through areas looking for grubs, worms, and acorns. (KTVU)

Park officials believe the feral hogs first came to the park during the dry season in October in search of water and food, and have stuck around since. Since the pack arrived, officials have implemented proactive public safety measures such as closing some nature trails.

"It is very important that Lafayette Community Park visitors keep children close when using trails, keep dogs on a leash at all times, and always obey all signs posted in the park," the city said in a news release. "Once the wild pig population is no longer a risk to park visitors, all trails will be reopened."

America's northern border has U.S. officials warning of widespread damage potentially posed by feral pigs spotted near the International Boundary between Canada and the United States. The pigs, described as ‘rototillers,’ root for food, wallow in farms, fields and forests, and can decimate terrain.

Officials are hopeful they will be able to clear the area of the pigs over the next few weeks.

Many of those who use the park said Wednesday it's time for the harmful swine to go.

"They really serve no purpose around here other than destroy the parks and recreation facilities," Moraga resident Mark Orders told KTVU.