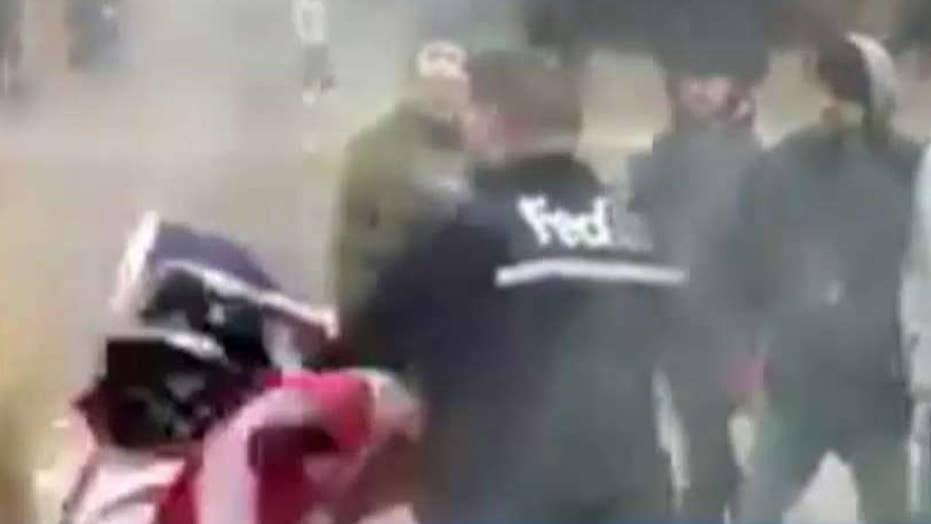 FedEx is backing a driver in Iowa who stopped flag-burning protesters from desecrating American flags in a confrontation caught on video that went viral, according to reports. Many on Twitter were calling him a hero.

The Iowa City Press-Citizen reported Friday that the video shows Matt Uhrin in a FedEx uniform scuffling with a small group of protesters on a pedestrian mall in Iowa City Thursday after he used a fire extinguisher to save two flags from being burned.

“Back off, back off,” Uhrin is heard yelling as he clutched one of the flags.

His actions prompted praise on Twitter and led FedEx to issue a statement saying that Uhrin remains an employee and there were no plans to change his status, Fox & Friends reported Saturday.

@FedEx You have an AMAZING 👍employee in Iowa City that saved our flag from being burned. Give him a raise!! 👏👏👏🇺🇸 #PATRIOT #MAGA #POTUS

You've got a hero working out here in Iowa City, @FedEx. Can you thank him for us? Love, Iowa City #MERICA #FedExGuy #GodBlessTheUSA 🇺🇸

On Friday FedEx said it had interviewed Uhrin.

Uhrin told the Press-Citizen Thursday that his confrontation with the protesters had nothing to do with FedEx.

An online petition Friday demanded that FedEx not fire Uhrin, the paper reported.

"Let's make sure Matt Uhrin keeps his job at FedEx," the petition said, according to the paper. "He was standing up for our American flag and should be commended, not punished."

As of late Friday, the petition had collected some 3,000 signatures.

According to the Press-Citizen, the protesters were planning to burn the flags to protest racial and social injustice.

A court in 2014 struck down as unconstitutional an Iowa law making it illegal to defile, cast contempt upon, satirize or deride a flag, according to the Press-Citizen.