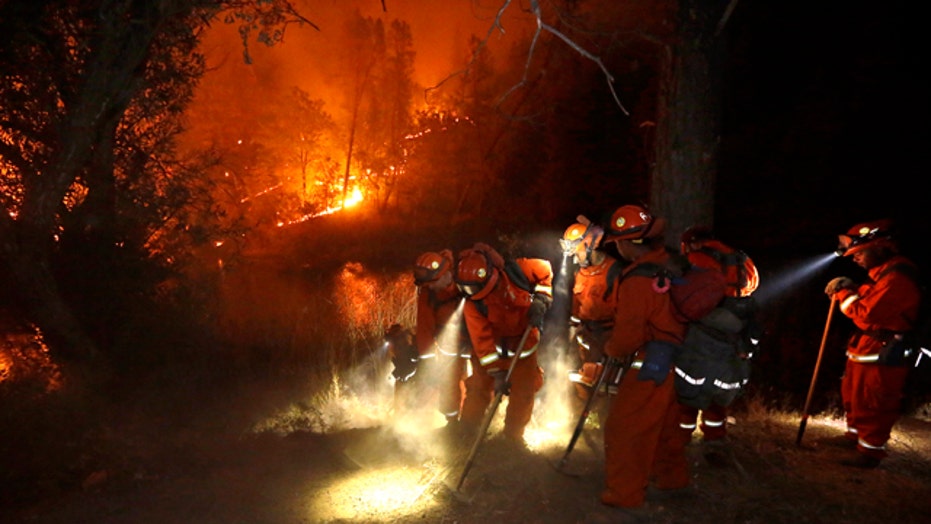 Wildfires are continuing to plague drought-stricken California and federal funding to fight them has dried up like parched El Dorado County farmland, leading critics to say the real problem lies nearly 3,000 miles away, in Washington.

For the year, more than 6 million acres -- an area the size of New Jersey -- have been burned, according to the National Interagency Fire Center. For the first time, the U.S. Forest Service will spend more than half its budget, some $1.2 billion, on fighting fires on the vast acreage it manages from the nation’s capital.

There is a better way, according to some experts, who believe more private ownership of land would divert the responsibility and cost from taxpayers.

“The federal government has shown itself to be a poor steward of its massive land holdings,” said Chris Edwards, director of tax policy studies at public policy think tank the CATO Institute. “The issues with Western lands are far too complex and sensitive for far-away politicians and bureaucrats in Washington to be able to solve.”

"If private owners fail they go bankrupt. If Forest Service managers fail, at worst they are transferred to another forest.”

With 190 million acres of land under its control, the Forest Service is ill-equipped to manage land to prevent fires or protect property once blazes break out, said Robert Smith, distinguished fellow at the Competitive Enterprise Institute’s Center for Energy and Environment.

“Private owners cannot afford to let their forests die of disease, insect infestations or wildfire,” Smith said. “They are on the job 24 hours a day, unlike 9-5 government bureaucrats. If private owners fail they go bankrupt. If Forest Service managers fail, at worst they are transferred to another forest.”

In total, the U.S. government owns about 640 million acres of land, predominantly in the drought-riddled western states. Some 85 percent of Nevada; 70 percent of Alaska and roughly half of Arizona, California and Utah are federal lands.

While the drought is having a damaging effect on much of the land, it is the Forest Service’s national forests and grasslands that are most affected by wildfires.

Firefighters in California are fighting several blazes, the worst of which are in the northern part of the state. (AP)

Smith in part blames the influence of radical environmentalists for blocking the Forest Service from managing woodlands by removing old or dead trees most vulnerable to fire. Critics also say the government’s refusal to open up roadways through forestland makes fighting fires unnecessarily difficult.

Environmentalists groups and the government claim the increase in fires is due to global warming, caused by the use of fossil fuels. The Forest Service contends that the threat has made the average wildfire season is now 78 days longer than it was four decades ago.

But whether it is global warming or the sum total of decades of mismanagement, all experts seem to agree forest fires are getting worse – and costing more.

Vilsack says the agency has no choice but to take money earmarked for other programs and use it to fight fires. (AP)

“We can’t avoid wildfires and wildfire has always been part of the western landscape,” Ray Rasker, executive director of Headwaters Economics, a nonpartisan development and land management research group focused on the West, told FoxNews.com. “Right now, the Forest Service spends so much money fighting wildfires – with 90 percent of it going to defend homes – it has to borrow from other accounts. And every year, it gets worse.”

Twenty years ago, firefighting made up just 16 percent of the U.S. Forest Service’s annual budget. This past fiscal year, an unprecedented 52 percent of funds went to fighting fires and, if left unchecked, the figure will rise to two-thirds by 2025.

The agency says it has no choice but to take funds from other programs and services, such as forest restoration and management, which would actually help prevent fires as well as aid protection and recovery from them. While other disasters -- such as tornadoes and hurricanes -- can leverage emergency funding, the Forest Service must stay within current budget allocations and take money from elsewhere in the agency to fund firefighting.

“[The Forest Service is] not in a position to do the restoration and resiliency work that’s important and necessary, not just to keep our forests healthy, but also to reduce the risk of these intense, enormous fires that we are now fighting,” said Agriculture Secretary Tom Vilsack, whose department oversees the Forest Service.

In some cases, fighting fires may be not only futile, but unwise, according to Timothy Ingalsbee, executive director of Firefighters United for Safety, Ethics and Ecology. He said some fires serve a valid purpose and should be left to burn.

“We need to be stopping fires from spreading toward human assets like homes, and steering fires into backcountry wild lands that we want to burn in order to reduce fuel loads or restore fire-dependent species habitat,” he said. “Most of the small fires that we are able to put out are ones that we need to work with.”

This photo obtained August 23, 2013 courtesy of the US Forest Service, shows the Rim Fire as it burns near Yosemite National Park, California. The wildfire outside Yosemite National Park, is one of more than 50 major brush blazes burning across the western United States , has more than tripled in size overnight and still threatens about 2,500 homes, hotels and camp buildings. Fire officials say that the blaze burning in remote, steep terrain has grown to more than 84 square miles (135 km) and was only 2 percent contained on August 22, 2013, down from 5 percent a day earlier. AFP PHOTO / US FOREST SERVICE == RESTRICTED TO EDITORIAL USE / MANDATORY CREDIT: "AFP PHOTO / US FOREST SERVICE / NO MARKETING / NO ADVERTISING CAMPAIGNS / DISTRIBUTED AS A SERVICE TO CLIENTS ==HO/AFP/Getty Images

But Ingalsbee is dubious of claims that turning land over to the private sector would result in better management.

“Much more aggressive fire suppression occurs on public lands, in fact, to prevent wildfires from spreading onto private lands which are unprepared and unsustainable given wildfire,” he said.

Janine Blaeloch, director of the Seattle-based Western Land Project, which seeks to protect the environment the interest of the public in land ownership, agrees.

“Private ownership is always going to lead to maximum exploitation of resources for profit,” she said. “If you value preservation of functioning ecosystems and wildlife habitat, only public land will provide that in any significant way.”