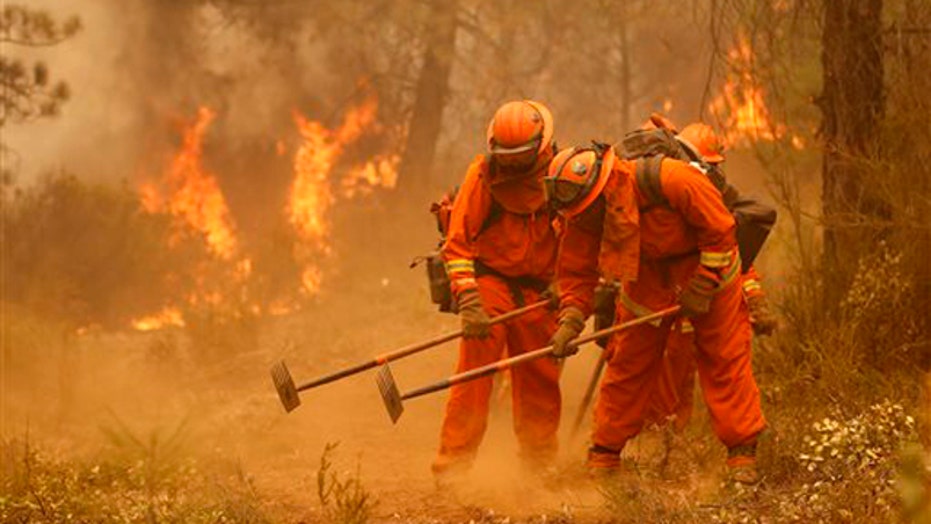 New mandatory evacuations were ordered for communities near a fast-moving blaze that has heavily damaged several Lake County towns. Earlier Sunday, Gov. Jerry Brown expanded a state of emergency to the state’s Lake and Napa Counties after the wildfire charred more than 60 square miles in 12 hours, prompting thousands to flee their homes.

Brown said the declaration will expedite debris removal and waive fees to people who need to replace official documents lost in the fire, according to The Associated Press.

The blaze, which erupted Saturday afternoon about 100 miles north of San Francisco, has destroyed an unconfirmed number of homes and other buildings and damaged highways and other infrastructure.

Four firefighters suffered second-degree burns in fighting the blaze and are hospitalized in stable condition.

The fire forced the evacuation of two towns as well as residents along a 35-mile stretch of State Route 29.

Brown had earlier declared a state of emergency for a separate 101-square-mile wildfire about 70 miles southeast of Sacramento.

More than 4,000 firefighters are working to beat back the flames of that fire and crews increased containment to 20 percent by early Sunday. Mandatory evacuations remain in place.

The fire, which broke out on Wednesday, destroyed 86 homes, 51 outbuildings and was threatening about 6,400 more. Teams had arrived by Sunday to assess the damage.

Authorities say the dry conditions, steep terrain and limited access to the flames are making for a challenging firefight.

"We're in a Catch-22, because without wind the smoke won't lift," Mike Mohler, a Cal Fire spokesman, told The Associated Press.

At a help center set up at the Calaveras County Fairgrounds, Joe Thomas rested on a folded tent near his pickup truck, one of dozens of parked cars and RVs. He described what he could save from the flames — and what he couldn't.

"I lost my business — it's all burned up — my shop, my house, 28 years of living," said Thomas, who lives near the community of Mountain Ranch. "I got to start all over. It's depressing."

Thomas, who runs a tractor dealership and repair business, said he and his wife grabbed papers, his work computer, photos and their four dogs. But they left a goat, five ducks, six rabbits and more than 30 chickens behind.

"I turned the pens open and turned them lose. I just couldn't gather them up," he said. "All we want to do is go home. It's miserable."