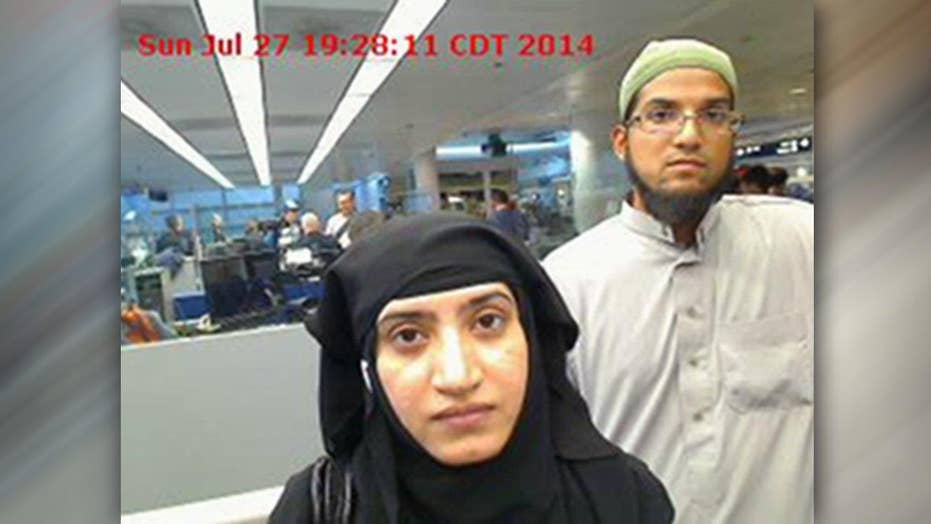 Following the money trail of the San Bernardino attackers

Enrique Marquez, a former neighbor who is reportedly related to Farook by marriage, is cooperating with investigators and has not been named as a suspect in last Wednesday's attack, which left 14 dead and 21 injured in a San Bernardino social services facility. Authorities have so far said they believe Farook and his wife, Tashfeen Malik, are the only known perpetrators of the attack, although Marquez was identified early on as the legal purchaser of the two AR-15 assault rifles used in the attack.

It was not immediately clear when the scuttled attack was planned or what its target was. CNN, citing two U.S. officials, reported earlier Tuesday that Farook and another unidentified individual may have conspired to carry out an attack in 2012. However, one official told CNN that the pair "got spooked" and decided not to go through with their plan after a series of terror-related arrests in Southern California.

Authorities had previously said that Farook and Malik were planning a follow-up attack after the San Bernardino assault when they were killed in a gun battle with local authorities last week. However, they have been unable to identify what the target of that attack would have been.

The new information appears to confirm that Farook's radicalization predates his marriage to Malik, whom he met in 2013 and wed the following year. A law enforcement official told Fox News on Tuesday that Syed was in part radicalized in the U.S., and investigators were still “looking and investigating a number of individuals domestically.”

Sources close to the investigation told Fox News that information about the prior planned attack was revealed in interviews with Marquez, who Reuters reported last year married Mariya Chernykh, whose sister is the wife of Syed Raheel Farook, the shooter’s brother. Federal officials told The New York Times that Marquez purchased the rifles legally in 2011 or 2012 and either gave or sold them to Farook.

Marquez is being described by investigators as a very important witness who is providing significant information to federal agents about acquaintances of Farook and Malik. Marquez has not been charged with any crime in connection with last week's rampage.

Law enforcement sources have also told Fox News that Marquez was in the process of converting to Islam and had begun using an Islamic name, making it more difficult for authorities to get in touch with him. Authorities said Marquez had checked himself into a Los Angeles-area psychiatric facility soon after the shooting.

An official at the Islamic Society of Corona-Norco told The New York Times that Marquez had begun attending services there in 2010 or 2011. The official said Marquez initially came to the mosque once a month, but his attendance later became less frequent. At one point, the official said, Marquez went eight months between visits.

This July 27, 2014 photo provided by U.S. Customs and Border Protection shows Tashfeen Malik, left, and Syed Farook, as they passed through O'Hare International Airport in Chicago. (The Associated Press)

Investigators have also discovered that Marquez is related to the Farook family by marriage. Reuters, citing California marriage documents, reported that Marquez married Mariya Chernyk on Nov. 29 of last year, four months after Farook and Malik began their married life in the United States. Maria Cernyk's sister, Tatiana, is married to Syed Raheel Farook, the shooter's older brother. The documents show that Raheel Farook and Tatiana Cehernyk witnessed the marriage.

A law enforcement official told Fox News earlier Tuesday that investigators were looking closely at the possibility that Malik was a terror "operative" who had been radicalized before she came to the United States in July 2014. The official said that authorities were also looking at whether Malik's family had any links to Islamic terrorism, noting that family ties are the "number one" way jihadist groups recruit new members.

Malik was one of just 519 Pakistanis allowed into the country last year on a K-1, or fiancee visa. Her path to the United States has raised warning flags on the U.S. government's immigration vetting practices after she was identified as one of two attackers.

The K-1 visa program is among the smallest visa categories managed by the government. Of more than 9.9 million visas issued in fiscal 2014, just 35,925 -- roughly 0.3 percent -- were fiance visas, according to State Department figures.

Fox News' Adam Housley and the Associated Press contributed to this report.