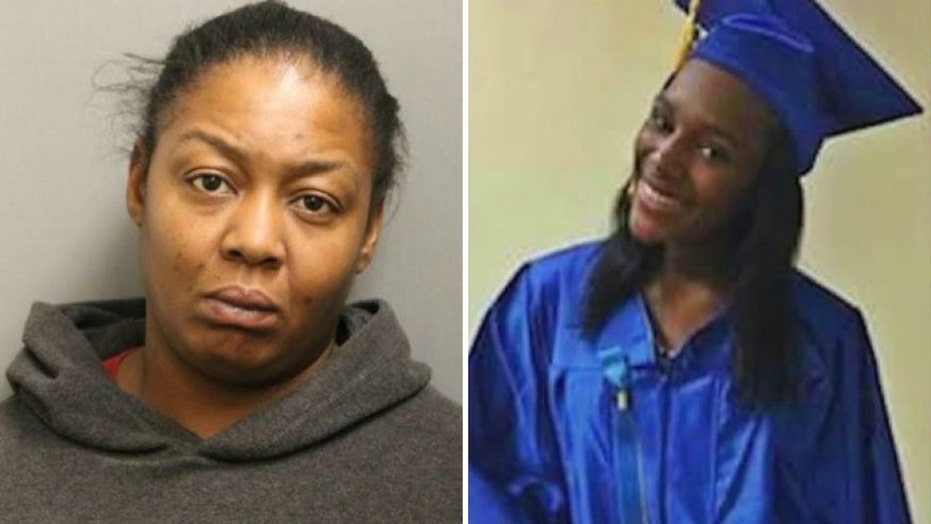 A fight broke out on the street near a Chicago courthouse Wednesday minutes after a bond hearing ended for a woman, who along with her daughter, is accused of murdering a 15-year-old girl.

Family members of Tamika Gayden, 35, and 15-year-old De’Kayla Dansberry rushed outside the Leighton Criminal Courthouse and began to fight, according to Fox 32 Chicago.

Several punches were thrown and a hair extension was pulled out of someone’s head before Cook County Sheriff’s deputies and Chicago police broke it up.

Cook County prosecutors said Wednesday that Gayden told her daughter to retrieve a switchblade from her purse before the girl stabbed Dansberry to death.

Prosecutor Christina Hake, citing eyewitnesses, told a juvenile court hearing Tuesday that the teen suspect tried to wash Dansberry's blood off the knife when she got home, while repeatedly saying "I killed her. I killed her." An eyewitness told authorities that the girl was "panicking" when she returned home.

The Chicago Sun-Times reported that Judge James Brown ordered the mother of five to be held without bail for murder and contributing to the “criminal delinquency” of a minor. Brown said Gayden should’ve been protecting both girls.

“We have another promising young life snuffed out in the city of Chicago,” Brown said. He added that there have been more than 200 murders in the last 139 days.

“To me, that’s unprecedented insanity,” he said of the violence. “Here we have a situation where we have two little girls having a dispute. One is given a knife by her mother and basically encouraged to kill another little girl.”

The Chicago Sun-Times reported Tuesday that the mother and daughter turned themselves in to police, accompanied by an attorney.

Prosecutors said that video of the fight existed, but did not elaborate on its origins.

According to Fox 32 Chicago, assistant state’s attorney Brian Whang said the girl and others were on the third floor balcony of an apartment building Saturday night when they started arguing with Dansberry and her friends, who were walking to a store.

The 13-year-old girl went down to confront the group, but not before Gayden told the girl to take a switchblade in case a fight broke out. Authorities said the girl took the blade and walked out of the Parkway Gardens apartment complex.

Whang said the teen initially on the sidelines and watched the fight when she suddenly engaged Dansberry and stabbed her once in the chest. The girl ran back inside the home to clean the knife and another person wrapped the knife in tape.

The 13-year-old pleaded not guilty and was remanded into custody by Cook County Judge Cynthia Ramirez.

Dansberry was an honor student and track star at Johnson College Prep, a local charter school. She was scheduled to run in a meet at Eastern Illinois University this Friday.