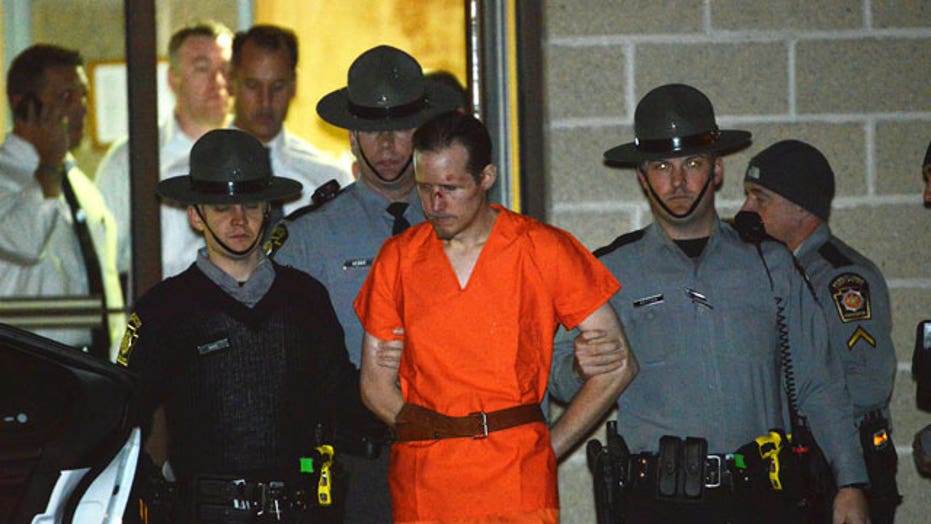 Prosecutors vowed to seek the death penalty for Eric Frein, the suspected cop killer who made his initial court appearance early Friday after a seven-week manhunt that ended with the self-styled survivalist shackled in the handcuffs of his alleged victim.

Frein, 31, appeared gaunt and fatigued during his arraignment at Pike County Courthouse on first-degree murder and other charges. He was not asked to enter a plea and was not accompanied by an attorney. Earlier Friday, throngs of onlookers and reporters cheered as Frein was led into the building amid high security, including armored vehicles. His next court appearance has been scheduled for Nov. 12.

Pike County District Attorney Ray Tonkin said he intends to seek the death penalty for Frein, who remains jailed without bail and has spoken to investigators since his arrest. Tonkin declined to elaborate, but said authorities "have now started to find the answers" behind Frein's alleged ambush. He also declined to discuss Frein's motive, but said police have no reason to believe he received assistance from anyone while evading capture.

"We have now started to find the answers that the community desired in this case," Tonkin told reporters. "The families in this matter, of Dickson and Douglass, and the Pennsylvania State Police family, have suffered unimaginable loss of unspeakable proportions."

The dogged hunt for Frein ended Thursday night when U.S. Marshals arrested him in an airport hangar during a routine sweep near Buck Hill. Frein was slapped with the handcuffs of the Pennsylvania state trooper he allegedly shot and killed, a fitting end for law enforcement officers to the 48-day manhunt. Cpl. Bryon Dickson, 38, was killed when Frein allegedly opened fire outside the Blooming Grove state police barracks on Sept. 12. Fellow officer Trooper Alex Douglass, 31, was also seriously wounded.

Hunting for Frein in the same area the team had been scouring for more than two months, officers thought they saw the suspect and immediately told him to surrender. Frein was taken into custody without incident.

The quiet takedown of Frein, who kneeled and put his hands up when marshals approached him, ended weeks of tension and turmoil in the area, as authorities at times closed schools, canceled outdoor events and blockaded roads to pursue him. Residents grew weary of hearing helicopters whirring overhead, while small businesses suffered mounting losses and town supervisors canceled a popular Halloween parade. The dragnet involved hundreds of law enforcement officials fanned out across the Pocono Mountains of northeastern Pennsylvania and cost about $10 million, State Police Lt. Col. George Bivens said.

"It feels good to know there's a guy like this off the streets," said Gregory Kubasek, 19, of Marshalls Creek, who drove to the barracks late Thursday to get a glimpse of the alleged cop-killer.

Noonan said Frein was in good health, despite what he described as a "scratch" on his nose that he said was already there when marshals arrested him.

Police said they linked Frein to the ambush after a man walking his dog found his partly submerged SUV three days later in a swamp a few miles away from the shooting scene. Investigators found shell casing matching those found at the barracks, as well as Frein's driver's license, camouflage face paint, two empty rifle cases and military gear.

Frein belonged to a military re-enactor's group, playing the part of a Serbian soldier. He had a small role in a 2007 movie about a concentration camp survivor and helped with props and historical references on a documentary about World War I.

The FBI named him to its 10 most wanted list.

Earlier this month, Pennsylvania State Police revealed information from a journal found in the woods in which Frein allegedly described shooting the state troopers. They also detailed campsites where Frein was believed to have hidden, cooking over small fires even as heavily armed police hunted him. Police found pipe bomb booby traps and a gun resting against a tree, but had only had a handful of unconfirmed sightings of Frein. Searchers had also come across items they believe Frein hid or abandoned in the woods in northern Monroe County: an AK-47-style assault rifle and ammunition, two pipe bombs, empty packs of Drina-brand Serbian cigarettes and soiled adult diapers.

"Got a shot around 11 p.m. and took it," Frein wrote on papers found by police. "He [Dickson] dropped. I was surprised at how quick."

A woman believed to be Frein's mother declined to comment when reached early Friday by FoxNews.com.

Halloween festivities in Barrett Township had been canceled due to the intense manhunt, but officials said they're back on following Frein's arrest.

"We, as a town, think the kids have gone through enough," said Ralph Megliola, chairman of the township board of supervisors.

Helen Blackmore, of nearby Cresco, said she was ready for a return to normalcy.

"It was very crazy out here," she said. "The helicopters were out all the time. Nobody was sleeping. Even today they were out. We're relieved. We're very relieved. We want things to get back to normal."