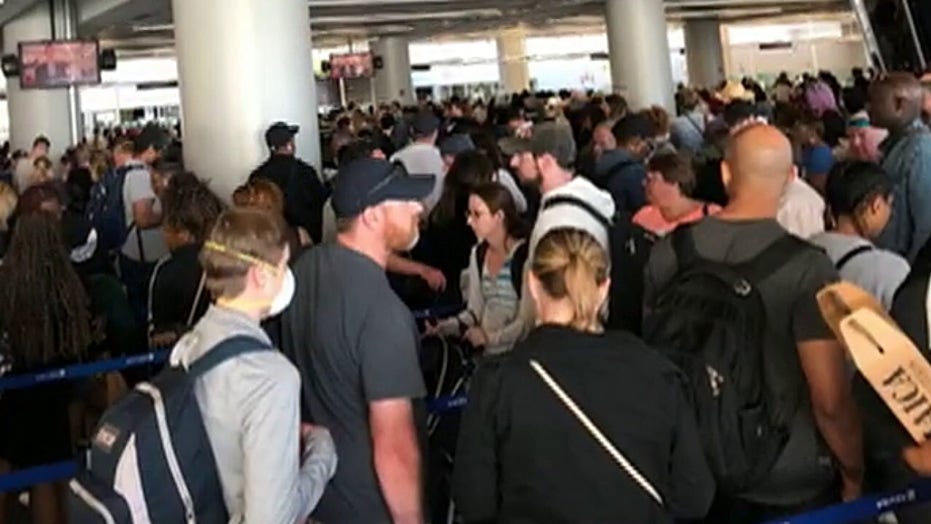 Shortly after the suspension ended, the FAA tweeted that an air traffic controller trainee had tested positive for COVID-19. The trainee was at New York Air Route Traffic Control Center, which "remains open and operational," according to an FAA statement.

"We have contacted local health authorities and are developing a plan to quickly sanitize/clean the affected areas," the statement read. "If the FAA must close any sectors of airspace during the sanitization process those flights will be rerouted as part of a long-standing contingency plan to ensure continued operations."

The suspension affected departures to Kennedy, LaGuardia, Newark and other airports in the region. The unidentified trainee hadn't been at the facility since March 17 and officials were working to determine how many people might have interacted with them.

"The safety of our staff and the traveling public is the FAA's top priority," the agency said. "Our controllers, technicians, inspectors and others with critical safety or security sensitive roles are essential components of our national airspace system. The FAA is working with local health officials and employee representatives to determine how many personnel might have interacted with the trainee in recent days."

The halt, which also affected Philadelphia International Airport, was lifted after about 30 minutes. Initially, air traffic controllers were warned it could last several hours.

Air traffic controllers at Kennedy had been operating from an alternate location on airport property this week after an FAA technician assigned to the airport’s control tower tested positive for COVID-19. In a statement, the FAA said that the technician hadn’t been to work since March 11 and that the tower was being cleaned as a precaution.

The news came as New York struggled to meet the demands created by the coronavirus. Hospitals in New York are facing dwindling equipment and supplies, including ventilators and masks, with an expected surge of coronavirus patients looming.

Officials have identified 2 million face masks that can be sent to hot spots, Gov. Andrew Cuomo said, and apparel companies are pivoting to make masks. One million masks are being sent to New York City hospitals Saturday and 500,000 to Long Island. And with hospital gowns in short supply, the state is trying to obtain gown material for apparel makers, he said.