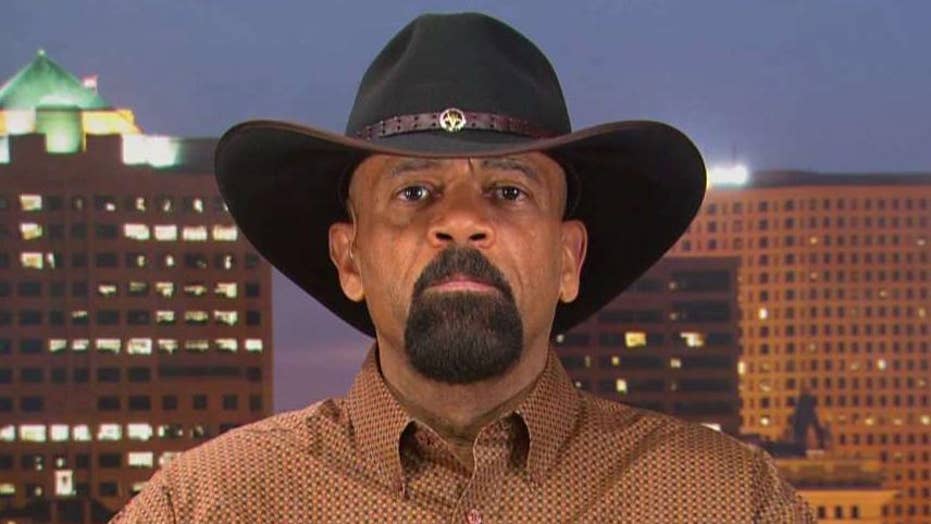 David Clarke reacts to reports of probe of airline incident

Milwaukee Journal Sentinel reports the FBI became involved after alleged incident between the former sheriff and a passenger on a flight.

Former Milwaukee County Sheriff David Clarke lashed out Saturday at what he called the “lying lib media,” after multiple reports claimed he was under investigation by the FBI.

According to the Washington Examiner, several news organizations reported Friday that an FBI search warrant in March allowed the agency to look into Clarke’s personal email.

Clarke, who resigned as a sheriff in August, tweeted, “BREAKING NEWS! When LYING LIB MEDIA makes up FAKE NEWS to smear me, the ANTIDOTE is go right at them. Punch them in the nose & MAKE THEM TASTE THEIR OWN BLOOD. Nothing gets a bully like LYING LIB MEDIA’S attention better than to give them a taste of their own blood #neverbackdown”

The tweet included a Photoshopped image of Clarke and President Donald Trump in a “wrestling match” against CNN. In the photo, Trump is shown restraining a wrestler who has a CNN logo for a face, while Clarke is shown kicking that face.

In another tweet, Clarke wrote, “LYING Lib media spreads FAKE NEWS about me and @realDonaldTrump to fool their liberal followers into believing LIES because as Mrs. Bill Clinton once said, ‘Look, the average DEMOCRAT VOTER is just plain STUPID. They’re easy to manipulate.’Classic!”

Despite the FBI’s search warrant in March, which related to an intimidation lawsuit, the agency’s probe closed in May, according to several news outlets.

According to the Washington Examiner, Clarke’s incendinary tweets were reported to Twitter as being in violation of its content policies, but the social media site's operators did not agree.

Clarke tweeted Saturday evening, “Winning against LYING LIB MEDIA and Whiney SNOWFLAKES again. Like @realDonaldTrump said, we’ll win so much we’ll get tired of winning. Not yet however. Diaper wearing lefty didn’t like my metaphor reference to punching LYING LIB MEDIA in the nose. Twitter said no violation. Duh.”