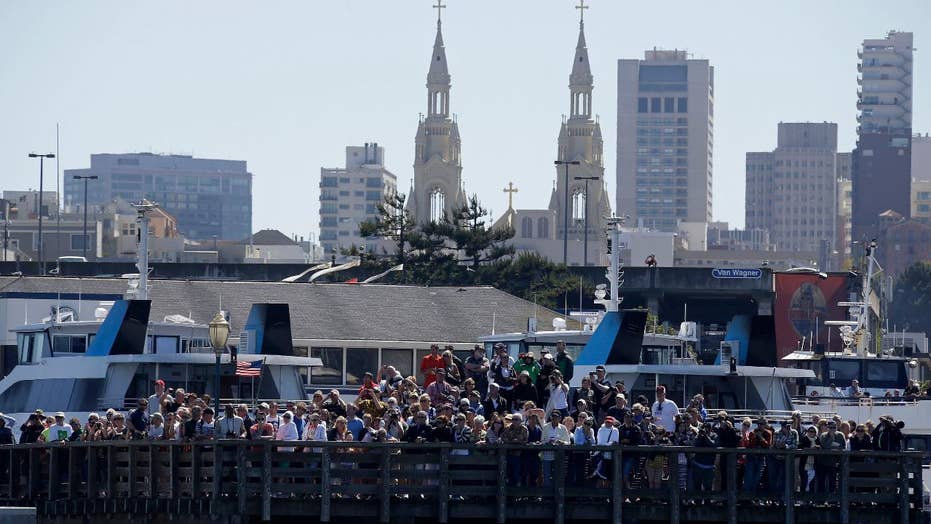 Everitt Aaron Jameson, 26, was arrested and charged Friday with one count of attempting to provide material support to a foreign terrorist organization.

In a statement, Acting San Francisco Mayor London Breed credited the "diligent efforts of the FBI and local law enforcement agencies" for thwarting the planned attack and announced that the San Francisco Police Department would have an increased presence throughout the city.

"San Francisco is a city that proudly champions democracy, freedom and liberty," Breed said. "Sadly, that makes our home a target. We will not allow the thwarted attempts of one dangerous individual to disrupt our way of life. We will remain vigilant and continue to protect our city from any threat."

A spokeswoman for the FBI's San Francisco field office said in a statement that there was "no specific and credible threat to the Bay Area at this time" and "the public was never in imminent danger."

Jameson denied the allegations during a hearing in federal court Friday.

His father, Gordon Jameson, said he believes the FBI has the facts wrong.

Tourists to San Francisco are drawn to Pier 39 by the sea lions that live on floating docks there. (REUTERS/Robert Galbraith)

"He wouldn't do that to innocent people," the elder Jameson told the Merced Sun-Star . "He's a loving, kind person that would never hurt nobody."

In an 11-page affidavit filed in federal court in Fresno Friday, FBI special agent Christopher McKinney alleged that Jameson espoused "radical jihadi beliefs" on social media. According to the agent, Jameson "liked" and "loved" ISIS-related social media posts, including one that threatened a Christmas attack in New York City.

Jameson also allegedly expressed support for Sayfullo Saipov, an Uzbek immigrant who drove a rented truck down a Lower Manhattan bike path on Halloween, killing eight people and injuring 11 others.

"I'm glad to know we Muslims are finally hitting back," Jameson wrote to an FBI informant he was communicating with. "The Kuffar deserve everything and more for the lives they have taken," he added, using an Arabic term meaning "non-believer."

Earlier this month, McKinney said an undercover FBI agent began communicating with Jameson and questioned how he might be able to help ISIS. Jameson allegedly responded, "I was a soldier in the Kuffar army before I reverted [to Islam]. I have been trained in combat and things of war. [God willing,] anything of that nature."

McKinney said Jameson attended Marine basic training "in or about" June 2009 and "graduated several months later." Jameson trained as a sharpshooter, but was later discharged for failing to disclose a history of asthma.

On Dec. 16, McKinney claimed Jameson met with a second undercover FBI agent and "expressed that he was willing to do anything for 'the cause,'" including traveling to fight with ISIS in Syria. At the same meeting, Jameson allegedly suggested a bomb-and-gun attack on the San Francisco waterfront's Pier 39 and asked for help obtaining a fully automatic military assault rifle -- either an M-16 or an AK-47 -- along with ammunition and materials to make explosives -- including nails, timers and remote detonators, the affidavit said.

Jameson told the undercover agent that "he did not have and did not need an escape plan because he was ready to die," McKinney wrote in his affidavit.

Pier 39, packed with restaurants, bars and souvenir shops, is home to San Francisco's aquarium and offers a good spot to photograph sea lions that gather in the marina below.

"Each and every Kuffar in this Nationalistic, Godless society has a hand in this," the note read. "You've allowed Donald J Trump to give Al Quds [Jerusalem] to the Jews. Both You and he are wrong, it belongs to the [Muslims] ... These acts will continue until the Lions of Islam overtake you."

Two days later, however, Jameson appeared to be getting cold feet about his plan. In a conversation with the second undercover FBI agent, Jameson allegedly said, "I ... don't think I can do this after all. I've reconsidered."

On Wednesday, FBI agents searched Jameson's home in Modesto and recovered fireworks, two rifles and a 9mm handgun, along with multiple magazines. When interviewed by FBI agents, Jameson "stated his support of ISIS and terrorism" and said that "he would be happy if an attack was carried out."

Jameson faces up to 20 years in prison if convicted. He was ordered held for a Dec. 28 detention hearing.

Jameson made a pledge to the Muslim faith two years ago at an Islamic center in Merced, according to the affidavit. A message left at the Islamic Center of Merced was not immediately returned.

"The threat from radical Islamic terrorism is real -- and it is serious," Attorney General Jeff Sessions said in a statement, but federal agents are protecting the nation from what he called "an alleged plot to kill Americans."