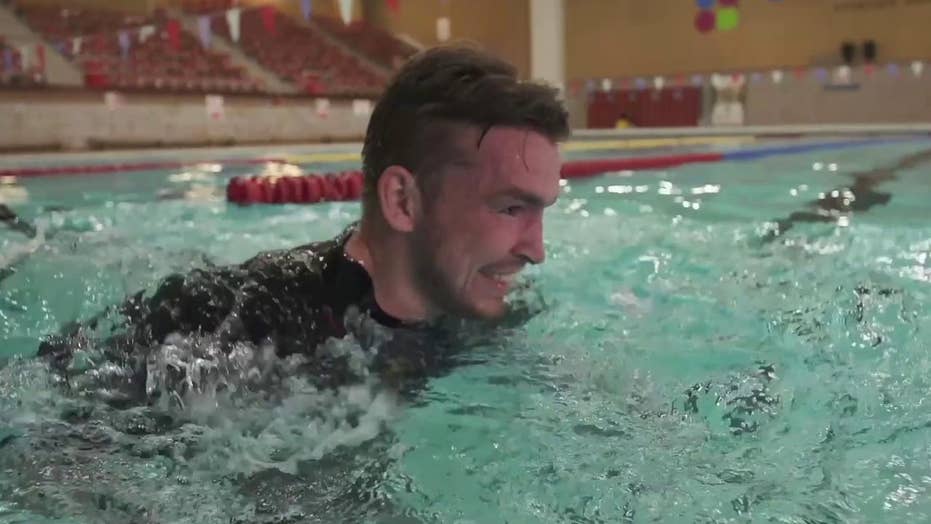 Terry Nelson is a British veteran and soccer player who lost his leg to kidney failure. In order to keep fit and reduce the pressure on his body, he developed the Aqua Running suit for pool workouts. Now he is bringing his business to the U.S. with the intention of helping fellow veterans.

The man known as Europe’s “secret weapon” is coming to America.

Terry Nelson, a former private in the British Army’s Parachute Regiment, is expanding his revolutionary company, Aqua Running, to the United States, and wants 50 U.S. veterans to mentor.

Nelson wants to set each one up with five hydro buoyancy suits – which retail for $300 each - and help them build their own rehabilitation and fitness training businesses.

He’ll teach them how to work with injured athletes, military personnel and other disabled people across the country - and help them turn a profit while doing it.

Terry Nelson, pictured left and right, wants to set U.S. veterans up with his hydro buoyancy suits and help them build their own rehabilitation and fitness training businesses  (Fox News)

For Nelson, it’s a labor of love and deeply personal. His unique water buoyant bodysuits tell the story of his extraordinary life.

As a young man, Nelson was active in sports. He was a member of Liverpool soccer club’s Under-18 team in the 1980s and trained for a spot in the army.

But a routine military physical change his life and tested his resolve.

VETERAN ON MISSION TO COMBAT SUICIDE IN MILITARY COMMUNITY

Doctors told Nelson he had a blood disorder that would quickly lead to kidney failure. He was told he’d be lucky to see his next birthday. But his brother Dennis stepped in and donated one of his kidneys.

“I thought, I have to repay my brother for the gift of life,” Nelson told Fox News from the British Ambassador’s Residence in Washington, D.C.

He vowed to compete in the 1993 World Transplant Games in his brother’s honor.

But a few weeks before the competition, tragedy struck again. He broke a metatarsal bone in his foot and was told it wouldn’t heal in time for the race.

Refusing to give up, he trained using flotation devices in the pool to speed up his recovery. It worked – and Nelson went on to win gold in the 5,000 meter run.

When he returned however, he knew something wasn’t right.

His body began rejecting the transplant. Fluid built up in his lungs, and for 12 years he was hooked up to a dialysis machine six days a week. He eventually lost his right leg, his hearing and was fitted with a pacemaker.

“I had to fight illness and injury all the time,” he said.

Christie Pearce Rampone (left), the former U.S. women's soccer team captain, in one of the suits; (right) the suit in action in the water (Aqua Running)

After the first transplant failed, Nelson was told not to exercise but he said sitting around only made him feel worse.

“You have a lot of time to think,” he said. “The suffering on dialysis has to be for something.”

He began going to the pool daily and running in water for 20 minutes. It helped him physically and mentally.

After his second kidney transplant, Nelson began developing a hydro buoyancy suit - a second skin of sorts - that keeps the body upright and allows the user to run with no impact or further injury.

VIETNAM VETERAN REUNITED WITH LOST PURPLE HEART, THANKS TO FELLOW VETERAN AND HIS DOG

The suit, which is designed with thick padding on the shoulders, trunk and thigh area, reduces the wearer’s weight in the water by 90 percent which allows for increased speed, strength and agility.

Word spread quickly about the super suit and in a few short years, they were on the must-have list for international athletes.

Nelson, often referred to as the “secret weapon” of European soccer, has a high-profile client roster that includes some of the world’s best: Real Madrid, Manchester United, Arsenal Liverpool and the England national team.

With Europe under his belt, Nelson has now set his sights on the U.S. where his suits have already been used to train the U.S. women’s soccer team. They are also used at the Olympic National Medical Center in Colorado.

Terry Nelson poses with Real Madrid soccer star Luka Modric; Madrid are one of the European soccer teams who have used the suits (Aqua Running)

But the former military man wants to reach out specifically to U.S. vets.

He’s tapped ex-NFL Superbowl Champion Tony “Goose” Siragusa to head up his operations stateside and is reaching out to veterans who might be interested in promoting the suit. On Friday he met with U.S. military officials.

“Who better to work with than veterans? When you have served your country, whether it be for the Army, Navy, Marines or Air Force, you learn discipline and a work ethic that is like no other,” Nelson said. “Ex-servicemen and women will have witnessed injury and trauma firsthand, so they already understand the needs of our clients and feel the same dedication that I do in making sure that we get these suits to every injured military member who needs it throughout the United States.”

During the U.S. rollout of the veteran initiative in D.C., U.S. Marines Matt Samnik and Thad Ash were among the first vets to test out the suits.

“This is my first time in the suit and I’m here to see if 1. I want to use it personally and 2. potentially assist to market it to the federal government,” Ash told Fox News.

Once in the water, Ash, who has been recovering from three spinal surgeries in three months, says he’s surprised by how the suit kept him afloat.

“It was keeping my entire head out of the water. I’m very surprised at how little effort it is to keep myself upright,” he said. “I wish I had it right after my surgery.”

Ash believes the suits could also be an effective training tool for soldiers who have a fear of water or after grueling boot camp sessions.

“It’s three months of hard, intense training and many times, many man hours are lost due to injury,” he said. “So, it could also be used for recovery and training during boot camp.”

“The amount of money we spend on a recruit trying to get back into basic training (after being injured)… this could probably reduce that time,” he said. “When you go into recruit training, you are issued gear. You should be issued one of these suits in my opinion.”