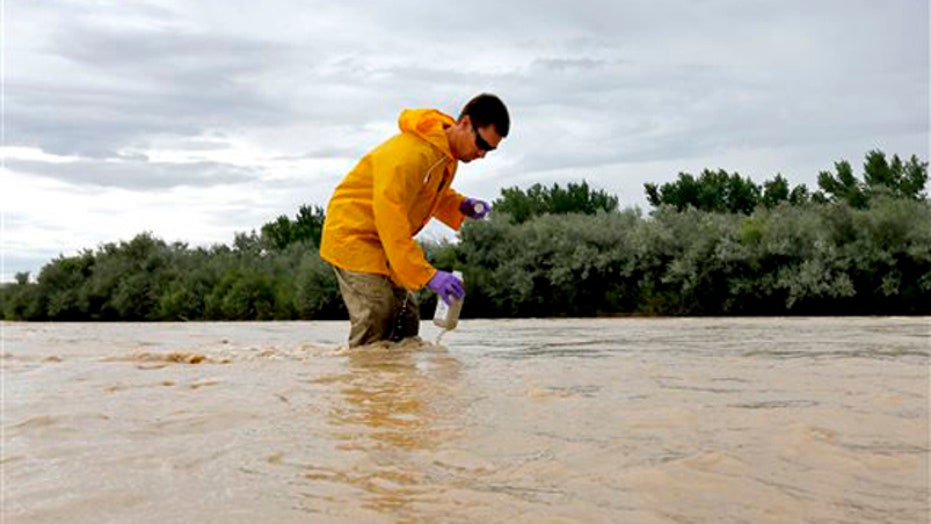 EPA: Toxic water from mine may be flowing into river at higher rate

Local citizen and conservation groups are at odds with the Environmental Protection Agency and some scientific observers as both sides evaluate the severity of the yellow-stained waters flowing through three Southwestern states.

The spill of three million gallons of contaminated Colorado mine water initially affected the state’s Animas River and has since passed through New Mexico, Utah and the Navajo Nation. But since the pollution began pouring into the river last week, turning the water an ugly amber hue, the spread of the contaminant has become more difficult to track as the toxins dissipate.

And that’s a good thing, according to Dr. Bruce Thomson, a research professor and professor emeritus in civil engineering at the University of New Mexico.

“The immediate impact is largely passed,” Thomson told Fox News on Wednesday. “The slug of contaminated water has washed through the system.”

Water flows through a series of retention ponds built to contain and filter out heavy metals and chemicals from the Gold King mine wastewater accident, in the spillway about 1/4 mile downstream from the mine, outside Silverton, Colo., Wednesday, Aug. 12, 2015. The Environmental Protection Agency has taken full responsibility for the mine waste spoiling rivers downstream from Silverton, but people who live near the idled and leaking Gold King mine say local authorities and mining companies spent decades spurning federal cleanup help. (AP Photo/Brennan Linsley) (AP)

However, despite the worst seeming to have passed, it was not immediately clear when residents would be able to use the water again.

Thomson said the water discoloration is largely the result of the introduction of iron precipitates. Iron is used in many drinking water treatment plants, Thomson said, because it’s a good element to remove dissolved metals.

“So that will mitigate some of the effects of the contamination,” he said.

But even an optimistic observer admits there will be some repercussions.

Thomson concedes that while he hasn’t heard of any fish deaths so far, bottom-living organisms such as mussels and shellfish will likely be smothered by the chemicals in the spill.

“These organisms are adapted to live in fast-moving streams with sand and gravel bottoms, and now we’re covering most of that sand and gravel with light, fluffy sludge,” Thomson said. “It’ll plug up the pours and the organisms will be smothered. They need the sand and gravel to provide nutrients and oxygen.”

"The immediate impact is largely passed"

Others are worried less about the creatures that live in the water than they are about the people who live alongside it.

“When EPA is saying to me it’s going to take decades to clean this up, that is how long uncertainty will exist as we drink the water, as we farm the land, as we put our livestock out there near the river,” Navajo Nation President Russell Begaye told the Associated Press. “That is just, to me, a disaster of a huge proportion.”

Robert Tohe, the Sierra Club Organizing Representative in New Mexico, said in a statement that the current spill is a symptom of a larger problem.

“The Animas River was sadly already contaminated due to the legacy of toxic mining practices,” the statement said.

The battle between those with hopeful forecasts and those that preach caution is also playing out in the political arena.

Federal and state officials in Colorado are reportedly having difficulty keeping their messaging on the same page.

“It doesn’t show where we are at right now,” Region 8 administrator Shaun McGrath reportedly told Hickenlooper. “You have to have a couple of days of data to show that you’re actually back to baseline conditions, and we’re not there yet.”

Hickenlooper, concerned with the closures of businesses that rely on the river, shot back: “That’s nonsense.”