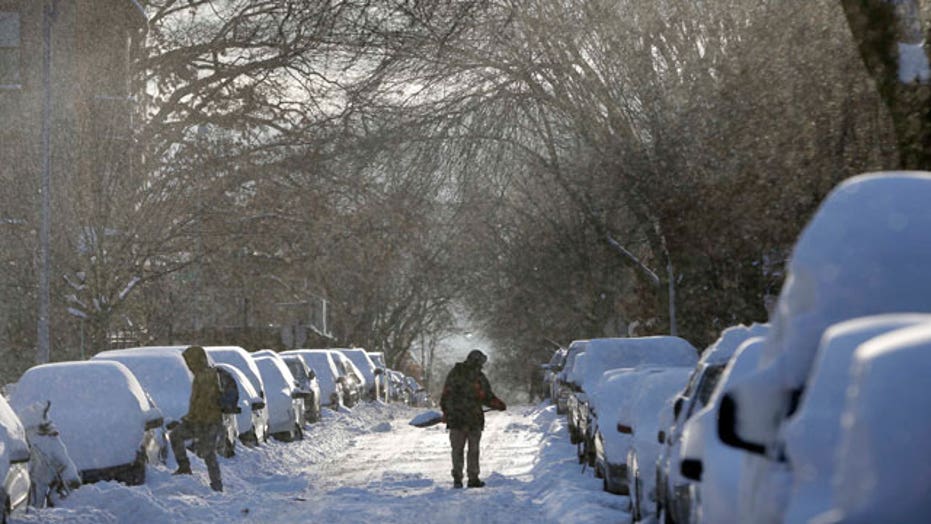 The East Coast is digging out Wednesday after a massive winter storm packing heavy snow, strong winds and icy temperatures hit the region the day before, canceling flights, closing government offices and leaving behind it bitter cold air from the Arctic.

The huge storm stretched from Kentucky to New England but hit hardest along the heavily populated Interstate 95 corridor between Philadelphia and Boston. Snow began falling at midmorning Tuesday in Philadelphia and dumped as much as 14 inches by Wednesday morning, with New York seeing almost as much. Manalapan, N.J., had the highest snowfall reading with nearly 16 inches.

The storm largely spared Boston and areas west and north of the city, which got about 4 inches, but other parts of Massachusetts were socked with as many as 18 inches. It was slow-going on roads elsewhere including New Jersey, where speed limits were reduced on the turnpike, and the New York metropolitan area, where authorities cautioned motorists about black ice. Commuters in Philadelphia and New York packed early trains or spent hours inching along roads in swirling darkness to get home the night before.

The snowstorm was the second for New York's new mayor, Bill de Blasio, who praised the job sanitation workers were doing to clear the streets.

"I think the city handled it very well," de Blasio said as he shoveled snow at his Brooklyn home Wednesday morning.

De Blasio said some streets couldn't be plowed because cars were in the way but added, "the minute they had the streets clear — in other words, there was not traffic in the way — sanitation did a remarkable job."

Ram Vyas, owner of Towers Liquor Mart in Weymouth, Mass., was shoveling his walkway Wednesday morning and getting ready for another busy day after the storm dropped about 16 inches of snow on the town, located about 15 miles south of Boston.

"It was very busy before the storm and now it will be busy after the storm," he said. "A lot of people have the day off from work, so they will be coming in to buy more alcohol, then watch TV, be with their families."

More than 1,600 flights were canceled Wednesday into and out of some of the nation's busiest airports, including in Washington, Baltimore, Philadelphia, New York and Boston, according to according to flight-tracking site FlightAware.com. That was down from about 3,000 flights the day before.

Melody Martinez, 23, who was heading home to Miami after visiting her mother in New York, went to LaGuardia Airport, hoping to catch her 9:10 a.m. flight Wednesday, which was canceled. She initially was told she couldn't get another flight until Thursday.

Martinez, who works in retail and attends Florida International University, eventually lucked out.

"Thank God I was able to get on a flight today," she said. She'd have to hang around the airport until 3 p.m., but she was still "very relieved."

Snow was expected to continue falling through Wednesday morning in the Boston area, MyFoxBoston.com reported. Wind chill temperatures were expected to drop to minus 15 to minus 24 degrees in some areas.

The storm was a conventional one that developed off the coast and moved its way up the Eastern Seaboard, pulling in cold air from the Arctic. Unlike the epic freeze of two weeks ago, it was not caused by a kink in the polar vortex, the winds that circulate around the North Pole.

Propane users will get pinched the most. Those who find themselves suddenly needing to fill their tanks could be paying $100 to $200 more per fill-up than a month ago. Homeowners who use natural gas and electricity will see higher heating bills because they'll use more fuel. But prices won't rise dramatically because utilities buy only a small portion of the fuel at the elevated prices.

The storm was blamed for at least one death in Maryland, after a car fishtailed into the path of a tractor-trailer on a snow-covered road about 50 miles northwest of Baltimore and the car's driver was ejected. Police said the storm might have claimed more lives: A preliminary investigation showed wet conditions played a role in a two-vehicle crash that killed two people in Prince George's County, Md.