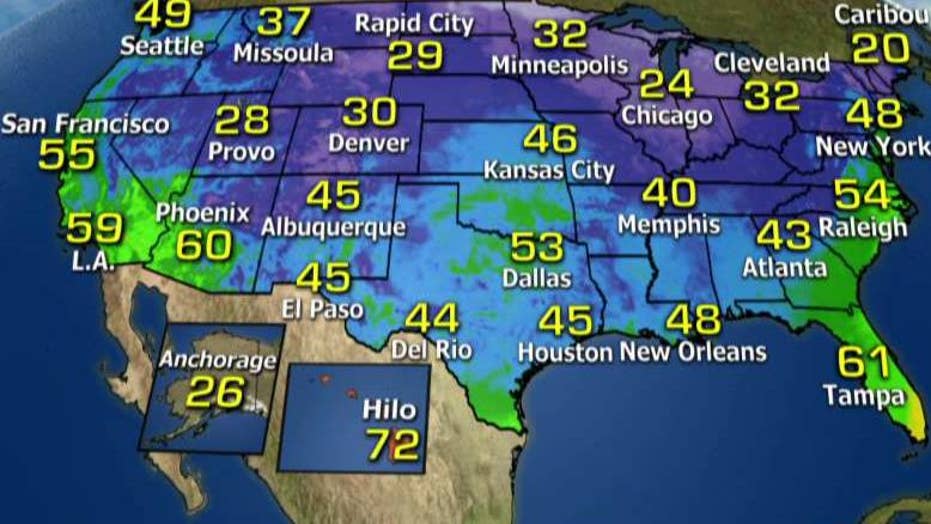 A treacherous mix of snow, sleet and freezing rain turned morning commutes to icy misery Tuesday for many returning from a long holiday weekend in the Northeast, a day after suspected twisters tore through parts of the South.

At least three deaths were reported on slick roads, all in Virginia, and motorists battled hazardous road conditions over a wide area from the Mid-Atlantic states through Pennsylvania to northern New England.

In the West, California and Arizona braced for more record warm temperatures after basking in the high 80s and low 90s on Monday. Millions along the East Coast, meanwhile, were still shivering from a deep freeze.

In Washington, the federal government was opening three hours late after freezing rain coated the capital city in ice — atop the several inches of snow that fell Monday. The U.S. Office of Personnel Management, which sets leave for 300,000 federal workers, said employees also could opt for unscheduled leave or telework.

Messy snow, sleet and freezing rain made driving hazardous around the Northeast. Separate tractor-trailer crashes within miles of each other shut the Thruway in upstate New York near Albany for a while Tuesday morning. Authorities later reopened most lanes.

In northeastern Pennsylvania, a crash involving several cars and tractor-trailers is caused a pileup that closed Interstate 81 before dawn Tuesday. Only minor injuries were reported. Roads in the area were icy after recent snow turned to freezing rain.

Buffalo's public works department called in extra crews to remove fresh overnight snowfall. The National Weather Service said accumulations could range from 2 to 4 inches in the Hudson Valley to 18 inches between Rochester and Buffalo.

In the South, suspected tornados associated with the big storm system turned several homes to rubble Monday in the northwest corner of Florida's Panhandle and in Mississippi. Authorities say more than a dozen homes were destroyed in both states. There were no immediate reports of any deaths or serious injuries from the reported twisters.

Donald Pugh was at home in Century when the funnel tore through his neighborhood of small wood-frame houses and mobile homes, downing trees. Pugh told The Associated Press that he and other neighbors used a chain saw to free a 94-year-old woman, stuck under a twisted metal door and other debris of her home.

"It took us quite a while," he said. "She was telling us where she was and that she was OK," Pugh added.

The woman was taken to a hospital as a precaution.

In Mississippi, windows were blown out of cars and two gymnasiums and a library were damaged Monday at a K-12 school in Wesson where children were in attendance when heavy thunderstorms and a possible tornado crossed at least 19 counties. No students were hurt.

Police say a Virginia trooper and two other people were on the median of Route 288 in Chesterfield County near Richmond when they were hit by a vehicle Monday evening, throwing one person into a nearby firefighter. Police said that person was pronounced dead and the trooper and the second person were taken to a hospital with serious injuries.

In several Northeastern cities — including New York, Boston and Hartford, Connecticut — temperatures had dipped Sunday below zero, falling to minus 40 on Mount Washington in New Hampshire. Many communities were expecting warmer temperatures to follow.

In the West, Arizona and California were baking in the heat: It was 89 on Monday in downtown Los Angeles, breaking 1977's record of 88. The National Weather Service forecast that Phoenix would hit highs of 89 Tuesday and 92 Wednesday, above the previous records of 84 and 88 degrees, respectively.

In Phoenix, Arizona, the fire department issued hot weather safety tips — such as not leaving children or pets unattended in vehicles, staying hydrated, and scheduling outdoor activities in the cooler morning and evening hours.