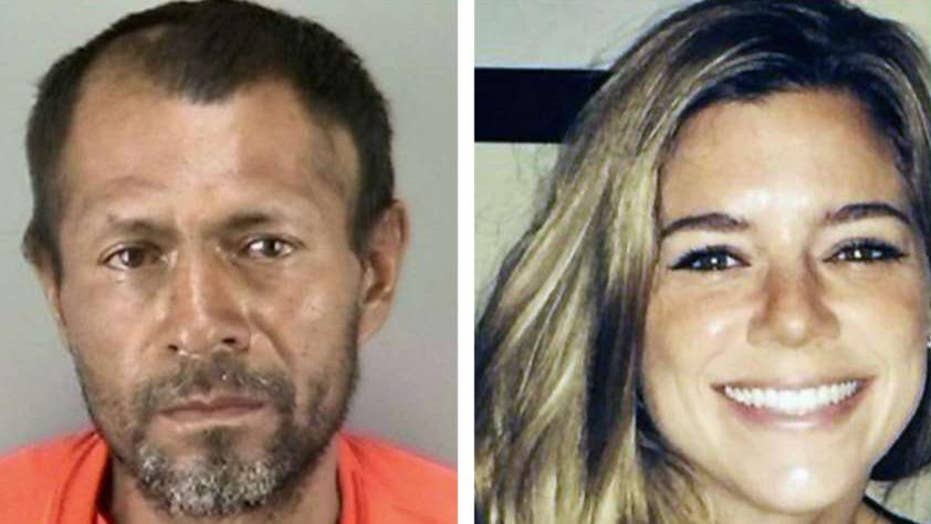 Zarate was found not guilty of murdering Steinle on a pier in San Francisco in July 2015. Steinle was walking with her father and a family friend when she was shot, collapsing into her father's arms.

Zarate had been released from a San Francisco jail about three months before the shooting, despite a request by federal immigration authorities to detain him for deportation. The case sparked a national debate over illegal immigration and sanctuary cities.

He was acquitted of first- and second-degree murder, involuntary manslaughter and found not guilty of assault with a semi-automatic weapon. He was found guilty of posessing a firearm by a felon.

The arrest warrant was originally drafted in 2015 and amended this week to include violations related to the charges of a felon in possession of a firearm, involuntary manslaughter and assault with a deadly weapon, all of which were filed after the defendant's initial arrest, according to Friday's warrant.

Officials at the Department of Justice told Fox News that there is an existing federal detainer that requires Zarate to be remanded into the custody of the U.S. Marshals to be transported to the Western District of Texas pursuant to the arrest warrant.

After the verdict, U.S. immigration officials announced late Thursday that Zarate would be deported.

"Following the conclusion of this case, ICE will work to take custody of Mr. Garcia Zarate and ultimately remove him from the country," U.S. Immigration and Customs Enforcement said.

ICE Deputy Director Tom Homan added, "San Francisco's policy of refusing to honor ICE detainers is a blatant threat to public safety and undermines the rule of law. This tragedy could have been prevented if San Francisco had turned the alien over to ICE, as we requested, instead of releasing him back onto the streets."

Trump tweeted late Thursday night calling the Steinle verdict "disgraceful," adding "No wonder the people of our Country are so angry with Illegal Immigration."

He tweeted again early Friday morning saying, "The Kate Steinle killer came back and back over the weakly protected Obama border, always committing crimes and being violent, and yet this info was not used in court. His exoneration is a complete travesty of justice. BUILD THE WALL!"

Attorney General Jeff Sessions also released a statement saying that despite California's attempt at a murder conviction, Zarate was able to walk away with only a firearm possession conviction because he was not turned over by San Francisco to ICE.

"When jurisdictions choose to return criminal aliens to the streets rather than turning them over to federal immigration authorities, they put the public's safety at risk," the statement said. "San Francisco's decision to protect criminal aliens led to the preventable and heartbreaking death of Kate Steinle."