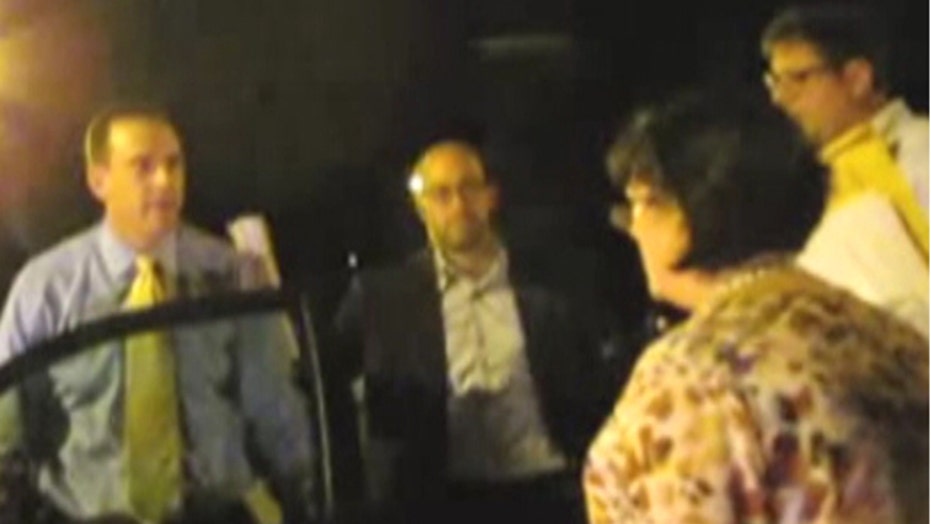 A school board has decided to split with a controversial law firm after parents from the district rallied Monday night calling for the firing of attorney Christopher Kirby, whose outburst at a parent last week was caught on video and went viral.

According to LoHud.com, the firm will handle the incident internally and remove Kirby from any future work with the district, school board president Yehuda Weissmandl said at the meeting.

“We disassociate ourselves with his actions and his words,” Weissmandl said. “We need to learn a lesson from what happened last week. We need to make clear to ourselves and to our community that we will do everything we can to make sure that this doesn’t happen again.”

Kirby, a lawyer for Minerva & D’Agostino P.C., the board’s outside legal counsel, is seen berating district parent Peggy Hatton, calling her the c-word and a number of other expletives in a parking lot after getting into a verbal confrontation at a board meeting inside.

“While we are absolutely LIVID over Chris Kirby's treatment of our public school parents, it's important that we not stoop to his level,” the rally’s Facebook event page reads.  “We are BETTER than him and we don't need to resort to cursing, yelling, and aggressive behavior. We will peacefully rally at the next board meeting and DEMAND his termination.”

“The ERCSD Board should terminate the contract with Minerva and D'Agostino now,” State Assemblywoman Ellen Jaffee had said last week. “They set a poor example for all of the students, public and private, in the East Ramapo School District.”

State senator David Carlucci and the editorial boards of the Rockland County Times and the Journal News also called for Kirby’s firing.

Hatton was speaking to the board last week about her son with special needs and an alleged lack of communication between the district and the public school community, when she accused Kirby of interrupting her with a laugh.  A verbal spat began, which spilled outside and led to Kirby’s vulgarities.

“I feel abused and harassed by Mr. Kirby and the fact that the board didn’t intervene either in the meeting or afterward,” Hatton told FoxNews.com.  “I can also say I am very glad there were no children present to witnesses this.  That was a blessing.”

Hatton contended that the law firm has acted in an unprofessional manner toward district parents and students about five times before this incident.

Kirby hung up the phone when contacted by FoxNews.com.

The primary purpose of the meeting last week was to discuss reorganization regarding the budget.  Hatton said the board was upset that the treasurer had to make $9 million worth of budget transfers, which was against board policy.  A number of extracurricular activities were cut, and the board demanded the matter be looked into.

Hatton was upset about how she said public school parents were kept out of the loop on matters such as the budget situation, while the private-schooled Hasidic Jewish population in the area was completely informed at the public expense.

Public school parents have contended that funds being transferred to the private school system are taking opportunities away from their children with the loss of extracurricular activities.

“We need to look at the big picture,” East Ramapo parent Lorna Deveaux said at a board meeting last year, regarding the shifting of funds.  “If we start stripping away our children’s education, a generation after my child, when she has children, there will be no education.  And to run this country, to have people as CEOs and directors, you will have to go out of this country where they respect education a lot more.”

The East Ramapo school board says the district’s hands are tied by a state aid formula, which limits the resources it can provide to the public school.

The rally also called for state intervention to help the public school.

An email with information regarding the event reads, “Our school board can no longer provide what is fair for the public school students and it is up to Governor Cuomo to intervene.”