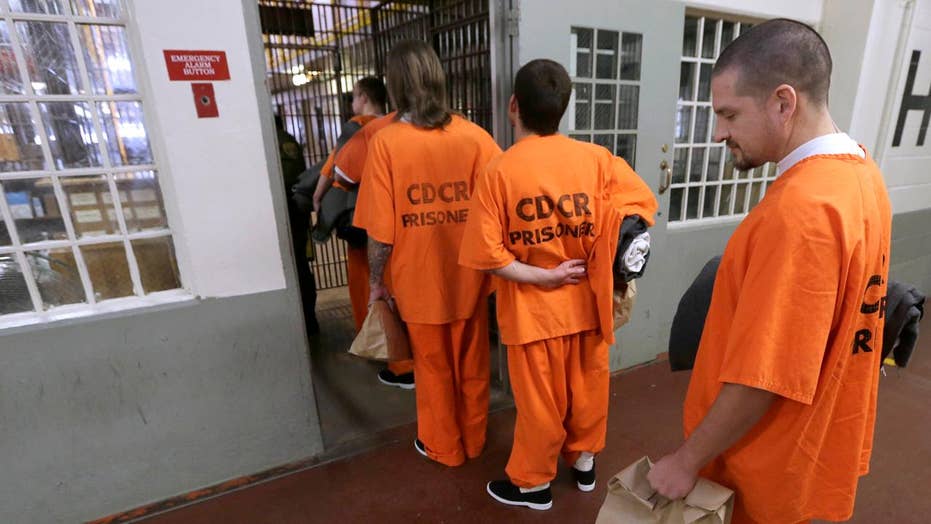 William La Jeunesse has the story

More than a dozen states are considering prison reform measures to drastically reduce their inmate populations to save money. But law enforcement in California are blaming their reforms for a recent uptick in crime.

"The most recent statistics from the U.S. Department of Justice show violent crime rates in some California cities has increased by over 50 percent," said Michele Hanisee, president of the Association of Los Angeles Deputy District Attorneys.  "If you look at the national data, our violent crime rates are going up faster than the rest of the nation. So why?"

Prosecutors and police have an explanation -- a series of prison reform measures, which reduce the state prison population by 20,000 inmates by releasing non-violent offenders early and making some felonies misdemeanors. One law, Assembly Bill 109, transferred 60,000 felony parole violators a year from state prison to county control. The measure saved California $100 million but some argue it was not without casualties.

Piper believes AB 109 contributed to the February 20 death of Whittier police officer Keith Boyer. The shooting suspect is convicted felon Michael Mejia, who court records show cycled in and out of prison several times between 2010 and 2016 for various charges including robbery and grand theft auto.  After his release from Pelican Bay State Prison in April 2016, he violated parole four times.

Under the old law, he would have returned to prison but under AB 109, he received a ten-day "flash incarceration" in county jail. Just days later, he allegedly killed Boyer and his own cousin and injured another officer.

"Ten days in jail, which for a hardened criminal is a slap on the wrist, has no effect,” said Hanisee.

Voters also passed Proposition 47 in 2014, which converted many nonviolent offenses, such as drug and property crimes, from felonies to misdemeanors. It affected future convictions and reduced California’s existing prison population by 13,000, which saves the state $150 million a year, according to a Stanford University study.

However, Los Angeles County Board of Supervisors blamed Prop. 47, along with AB 109, for creating “additional and considerable” threats to law enforcement. The board cited the death of four police officers in the last year. In two cases in Los Angeles and Palm Springs, the suspects had parole violations that would have put them back in state prison before the measures. Instead, they, too, received flash incarcerations.

"If it's not AB 109, if it's not Prop. 47, why are the violent crime rates going up?" said Hanisee. "You have to stick your head in the sand like an ostrich to think that maybe releasing thousands of felons to local probation doesn't have something to do with it."

"California is certainly having a significant problem with the increase of crime in our state,” said California Assemblyman Matt Harper, R- Huntington Beach, who opposed AB 109.  "The only thing that's really showing a difference in terms of how we approach crime and criminals is this change in our law allowing people to be able to go out on the streets, which previously they would have stayed in prison and not be committing crimes. To play these nonviolent offender games [is] a recipe for disaster."

But others disagree with linking a reduction in inmate numbers to spikes in crime rates.

"The link between incarceration [and] crime is not nearly as strong as many people believe it is," says Sentencing Project Executive Director Marc Mauer. "New York and New Jersey have reduced their prison populations by 25 percent in the last decade and they've seen crime rates decline."

Mauer and other prison reform advocates says states can effectively reduce incarceration numbers if they invest in post-release programs.

"What California needs to do is invest the savings gaining from reducing the state prison population,” Mauer said. “That involves probation officers helping people transition. That involves substance abuse and treatment. Some involves job placement -- all the things we know that can help to reduce subsequent crime by these people.”

Charis Kubrin, a professor of criminology at the University of California-Irvine, claims AB 109 "had zero impact" on violent crime across the state, according to first scientific analysis of AB 109 last year. After accounting for factors like unemployment, the UC-Irvine study found the assembly bill did contribute to a rise in property crimes, with the most dramatic increase in auto thefts. The study found no evidence it increased the number of assaults, rapes and murders.

The Public Policy Institute of California found similar results, even though some places, including San Francisco, Los Angeles, and other cities throughout Southern California, saw double digit percent increases in violent crimes in 2016, according to its analysis of FBI data.