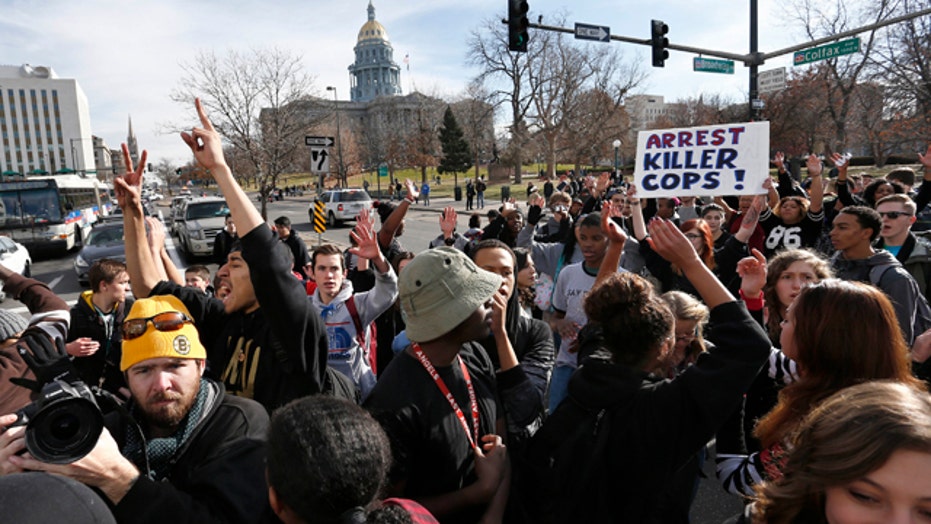 Officer John Adsit underwent six hours of surgery Thursday for injuries sustained in the accident and was in critical, but stable condition. But the reaction of young students, reported by the Denver Post, left residents stunned and members of the Denver Police Protection Association angry. Students were heard chanting and cheering after the officers were hit. Teachers looked on and did not intervene while the students chanted, Fox31 Denver reports.

“The Denver Police Protective Association has learned that immediately after the horrible accident yesterday injuring four Denver Police Officers, several parties in the protesting group cheered and chanted “hit him again.” These actions are not only reprehensible but quite possibly the most disturbing thing this Association has ever heard,” a statement released by the police officers’ union Thursday night said.

The students were mainly marching in support of people protesting the shooting death of 18-year-old Michael Brown, who was killed by officer Darren Wilson in Ferguson, Mo. Wilson was not indicted on any charges by a Ferguson grand jury last week.

“This group of high school students not only broke DPS rules by leaving school without authorization, but broke laws of the City and County of Denver and State of Colorado regarding traffic regulations and the right to assemble with a permit. The DPPA recognizes citizens’ rights to assemble lawfully. This, however, was not a lawful assembly, which ultimately cost four Denver Police Officers a trip to the hospital. One of which is in critical condition,” the statement continued.

“We have no knowledge of the alleged comments,” the Denver Public Schools said in a statement. “We would deplore any such comments and will look into the allegation, and would welcome any evidence that would assist us in an investigation. All afternoon yesterday and all day today, students at East expressed their deep concern for Officer Adsit and his family and their appreciation for the police assistance in ensuring student safety during the march.”

In a statement of its own, the Denver Police said it could not confirm the claims made by the union that students cheered when the officers were struck.

Denver Public Schools said they have no plan to stop the protests after the second day of massive student walk outs from high schools in the area.