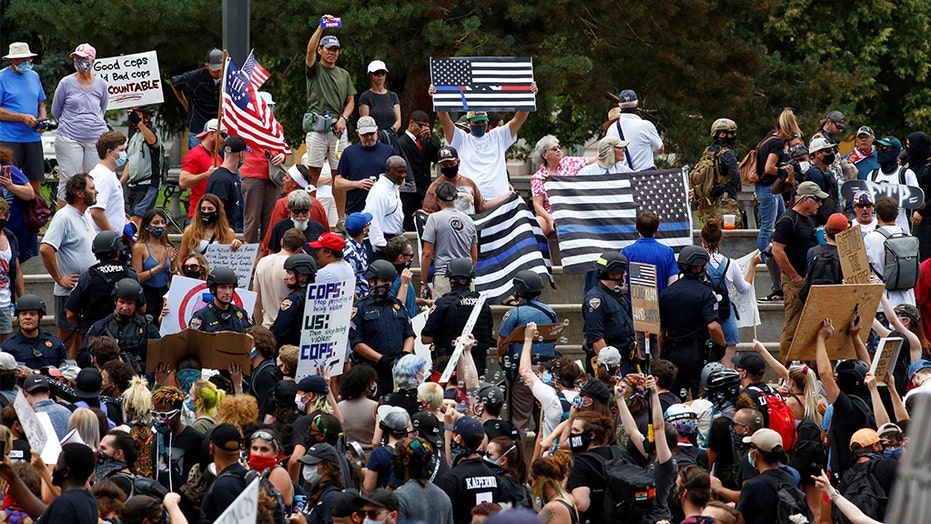 Denver police union president Nick Rogers said Wednesday that a “stand-down order” was in place when anti-cop demonstrators descended on a Back the Blue event Sunday afternoon, resulting in a violent clash with police supporters.

Nick Rogers, president of the Denver Police Protective Association (DPPA), revealed the stand-down order during an interview on the "Peter Boyles Show" on 710 KNUS. Conservative blogger Michelle Malkin, who was at the pro-cop rally and also on the show, described accused police of not stepping down as the chaos unfolded.

Supporters of law enforcement officers stage a rally in Denver and are confronted by counter-protesters demonstrating against racial inequality. (Reuters)

Rogers, who was not actually at the rally, said that after investigating what happened, he discovered that a stand-down order was given by the incident commander.

He said that one lieutenant refused to follow that order and kept his officers at the rally.

“That’s the only reason this thing didn’t get worse, because somebody broke rank and decided to not retreat,” Rogers said. “And they stayed so they could provide some assistance.”

Asked by Boyles exactly who gave the order, Rogers refused to reveal the name.

Advertised by the Pro Police Rally Colorado Facebook page, the sixth annual Law Enforcement Appreciation Day event was scheduled to be held Sunday from 3 to 6 p.m. at the amphitheater in Denver’s Civic Center Park.

COLORADO POLICE ON THE HUNT FOR MAN ACCUSED OF KILLING ROOMMATE’S 2 DOGS, DISMEMBERING 1

Randy Corporon, an attorney who helped organize the event, said Denver Police Chief Paul Pazen had asked him to either reschedule or move the pro-police gathering from its normal location, citing a risk that officers could be put in danger as Black Lives Matter demonstrators planned a counter-protest also at the Civic Center Park.

“He was agitated that we're going to get his officers hurt,” Corporon told the Denver Post. “My response to him was that he should allow his officers to do their job and if people are down there breaking the law, to stop them. Because they'll have nothing to fear from us.”

Shortly after the rally began, anti-police demonstrators moved into the amphitheater space, banging drums, blowing whistles, clanging pots and shouting obscenities to drown out the music.

Several people threw punches. Photos showed clashes between women from opposing sides pulling each other’s hair. One man was bloodied and had a large gash in his forehead.