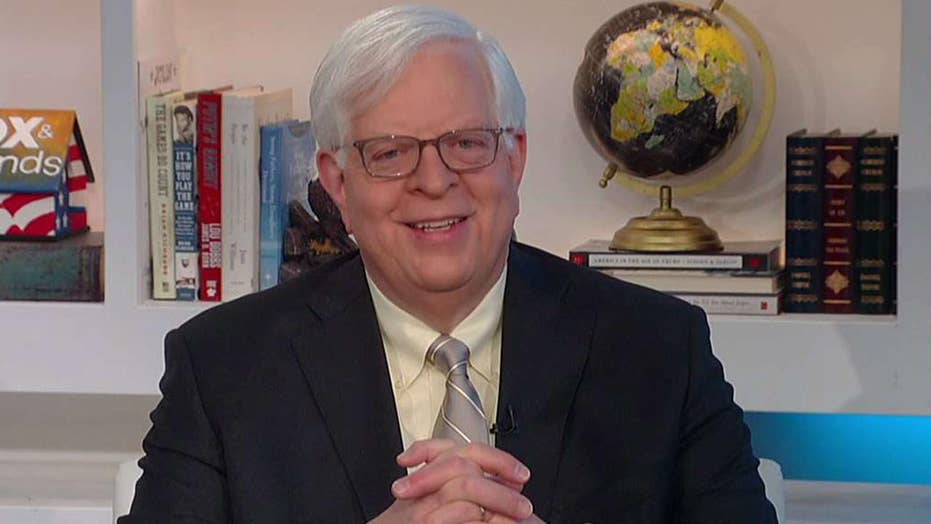 Dennis Prager: Lack of faith is a national tragedy

Author opens up about his new book 'The Rational Bible: Exodus.'

Dennis Prager is no stranger to controversy.  A columnist and syndicated radio host, for years, he’s expressed his viewpoints on everything under the sun--and gotten plenty of pushback.

He’s been called a hypocrite by “The Atlantic,” a dope by the “Huffington Post” and a spreader of lies by Media Matters. Even fellow conservatives such as Jonah Goldberg and John Podhoretz have recently taken him to task for his opinions.

Now he’s taking on the Bible. Okay, “taking on” might be the wrong way to put it, but Prager’s new book, “The Rational Bible: Exodus,” is a chance for both fans and opponents to understand how the Scriptures underlie his sense of morality.

“[My job] make the Bible known to as many people around the world as possible, so that they have access to the finest guide to life ever written.”

Coming from Prager, the book is likely to challenge much of modern ethics, but that would be okay with him—he wants people to take another look at the Bible, to change how they perceive it.

His main mission is to let the world know the Bible is as relevant as ever. As he explained in an interview with Fox News, he feels his job is to “make the Bible known to as many people around the world as possible, so that they have access to the finest guide to life ever written.”

The roots of his book go far back. He was teaching the Torah (the first five books of the Bible) about 25 years ago at a Jewish university and noticed half his students were non-Jews. He realized “either the Torah has something to say to everyone or it has nothing to say to Jews.”

So, essentially, there’s a quarter-century’s experience (at least) behind this book.  For the last three years, Prager notes, it’s all he’s been writing.

He started with Exodus, and not the first book of the Bible, Genesis, “primarily because it contains the Ten Commandments, the moral centerpiece of the Bible.”

A good portion of his book—17,000 words, by Prager’s count—in fact deals with the Ten Commandments.  Next year he hopes to have a book out on Genesis, and, ultimately, to complete five volumes on the Bible.

Prager is concerned that many dismiss the Bible as not being applicable to today’s world, some even calling it morally harmful.  His book, he hopes, can set people straight.  He’s not appealing to faith, he says, but to reason.

One problem is that many of the rules listed in Exodus seem dated.  But, as Prager notes, almost any legal code becomes dated in its specifics. “The issue is what values and teaching we can derive from these laws.

Few people today own oxen, but the law that an ox that kills a human being must be put to death reflects a fundamental biblical value—the preciousness of human life, and the price a killer, even an animal-killer, must pay for taking it.”

Indeed, the Covenant Code--rules for living found in chapters 20 through 23 of Exodus--plays a significant role in The Rational Bible.  Modern critics have questioned the value of these rules, where women seem to be property, and slavery is taken for granted.

“Things that at first appear irrelevant, primitive, or even immoral turn out to be important and often great moral leaps forward.”

Prager hopes people will get a chance to examine his take. One of the central lessons of his book is “Things that at first appear irrelevant, primitive, or even immoral turn out to be important and often great moral leaps forward.”

He believes his book shows how “new and different the Bible was from anything that preceded it.” It brought the world a new kind of morality, and way of life, and he hopes to help people understand the “sublime moral values” it champions.

In fact, that is part of the evidence as to why God is the ultimate author of the Torah (even if there were human intermediaries)—because it was “utterly different and morally superior to everything else ever believed.”

And such wisdom, if properly comprehended, still applies today.  For instance, Prager hopes to explain important distinctions found in the Bible—“human-animal; human-God; man-woman; good-evil; holy-profane; and God-nature.”  Understanding these distinctions “would help explain to anyone how to best order the world.”

He believes readers can discover in his book not just a better understanding of the Bible, but a better way to live.  Thus the book is his attempt to “explain the life-enhancing insights, teaching, and morality” contained in the Torah.

While he hopes he can convince some people to be believers, that is not his primary purpose--he notes the Bible’s wisdom would be helpful to both believers and non-believers alike.

“How we act is far more important than how we think or feel.”

For instance, Prager argues it’s important to understand that “how we act is far more important than how we think or feel.” While that insight may come from his reading of the Bible, it’s a precept that anyone can follow.

So The Rational Bible--Exodus offers a challenge to all—to experts and novices, to evangelists and atheists.  From a man who has been challenging people for years with his opinions, this is the ultimate challenge—it’s Prager’s passionate argument about what God expects from you, and what you can do to change your own life.