The acting secretary of defense said Saturday he has not yet determined how much money he will redirect to President Donald Trump's border wall project.

Patrick Shanahan, who has been leading the Pentagon since Jim Mattis stepped down Dec. 31, made the comment in an interview with reporters flying with him from Germany to Washington, The Associated Press reported.

Shanahan said he has a great deal of discretion in deciding how to use the authorities granted to him by Trump's declaration Friday of a national emergency.

The former Boeing executive said he would be working out details starting Sunday, emphasizing that his mission is to support the border security needs of the Department of Homeland Security. 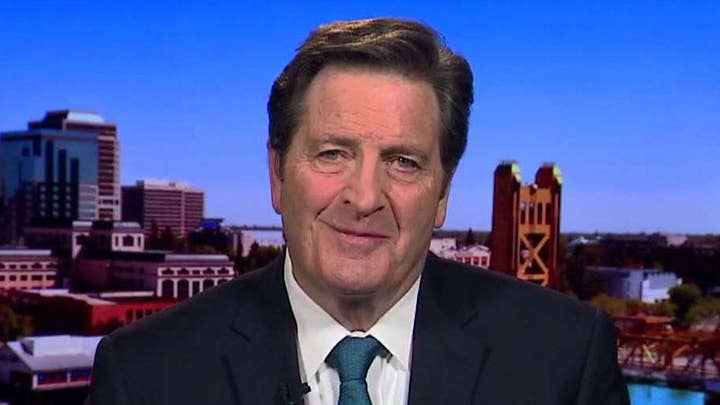 The White House said before Trump's announcement that the border project, which is opposed by Democrats, would receive $3.6 billion that Congress originally provided for military construction projects and $2.5 billion from the Pentagon's 2019 drug interdiction program.

Shanahan, however, indicated that he has the discretion to provide less, although he said the $3.6 billion figure is likely to prove correct. He stressed that he has not yet made any decisions.

"You can trust the numbers," he said, referring to the $3.6 billion and $2.5 billion, "in terms of the potential." Ultimately, the amounts will be determined by linking the available funds to specific border security projects, he said, adding that those connections are not yet complete.

The law allowing a repurposing of military construction funds during a national emergency says the secretary of defense is authorized "to determine whether border barriers are necessary to support the use of the armed forces" in an emergency.

Asked whether this means he can decide whether a wall is militarily necessary, he said, "For us the determination will be made in coordination with the Department of Homeland Security." He said later, "There have been no determinations by me."

He also said the staff that supports the Joint Chiefs of Staff at the Pentagon has been working out a "mission analysis" of border security needs, including a recommendation on where barriers should be prioritized. This work began some time ago in anticipation of a possible Trump emergency declaration.

"I will go in and review that analysis now that an emergency has been declared," he said, adding later: "Very deliberately, we have not made any decisions. We have identified the steps we would take to make those decisions. ... We don't want to fumble through this process" or take false steps.

A defense official said later that Shanahan is scheduled to be briefed in coming days by the military service secretaries and his internal staff on funding sources and likely project priorities. The official spoke to reporters on condition of anonymity to discuss internal deliberations.

Shanahan said he was aware of the political hazards of diverting military construction money from high-priority areas like military housing, suggesting he would attempt to avoid that.

Rep. Mac Thornberry of Texas, the top Republican on the House Armed Services Committee, said before Trump's announcement that while he favors spending more on border security, he opposes diverting "significant" sums from the Pentagon budget.