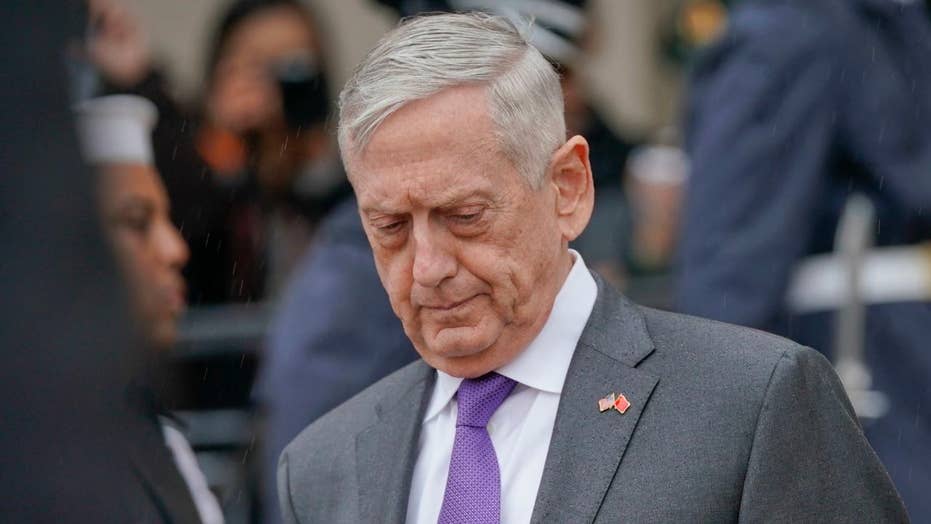 Mattis heads to Texas to visit troops deployed to border

Defense secretary meeting with troops at the U.S.-Mexico border to discuss their response to the migrant caravan; Texas Attorney General Ken Paxton speaks out on the visit.

Defense Secretary Jim Mattis arrived in Texas on Wednesday and visited troops deployed to the border.

Mattis is spending about an hour with active-duty Army soldiers in Donna, Texas who are living in what some have called substandard living conditions.

Unlike a deployment overseas, these 5,900 troops are not getting combat pay. Their living conditions are Spartan – most are living in tents and eating pre-packaged MREs, even though fast food and grocery stores are nearby.

Mattis called the deployment legal and justified, and said it was necessary to make sure the U.S. border with Mexico was properly secure.

On Wednesday, outgoing Sen. Jeff Flake, R-Ariz. called the deployment of thousands of active-duty troops to the border a “stunt.”

Flake said the work at the border should be handled by civilians – not military personnel.

"We shouldn’t be doing this,” Flake said, “and this wasn’t an issue that Congress was involved in, it was an executive decision."

The Pentagon has been unwilling to answer questions about how much this deployment will cost. Unlike the past, the Department of Homeland Security will not be paying for it. The Pentagon will. Early estimates point to a $200 million bill, which some worry will mean less money to fix planes and maintain equipment.

It's still not clear why the Pentagon took the unusual step of deploying active-duty forces and not the National Guard, as it has done in the past. Thousands of people who are part of a migrant caravan are making their way to the border.<br data-cke-eol="1"> (AP Photo/Marco Ugarte)

“We'll update you on costs as they become known,” Mattis said. “Obviously, the units executing the border mission have got to report them right up here. We are capturing the costs."

At first, the name of the mission was made very public, "Operation Faithful Patriot."  But since the election, the message from top brass has been to drop the name and tell the public the U.S. military is supporting the Border Patrol.

The president mentioned the migrant caravan heading to the southern border many times ahead of the midterm elections, but has not mentioned it much since. It's still not clear why the Pentagon took the unusual step of deploying active-duty forces and not the National Guard, as it has done in the past.

Five of the 39 units deployed to the border are public affairs units – suggesting the Pentagon knows this is more about messaging than reinforcing the border. The orders signed by Mattis stand to expire on December 15, indicating the troops could be home by Christmas.

Mattis said the Military Police are the only military personnel who will provide force protection for those service members supporting the mission at the border. He said the service members are only there in an engineering capacity and will be laying out barbed-wire fences.

“The troops doing that obviously are not armed,” Mattis said, “they don’t need their weapons.”