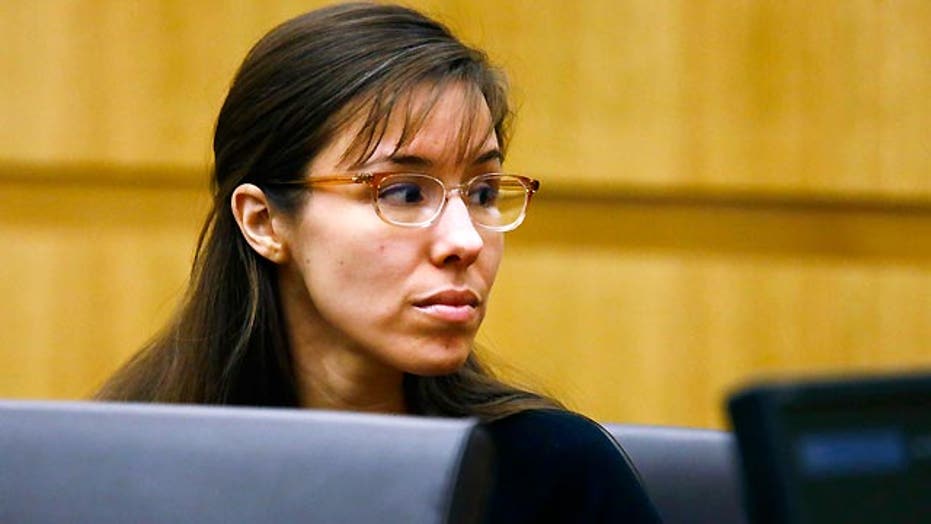 Was it a mistake for Jodi Arias to testify?

The 'On the Record' legal panel breaks down the evidence against the woman who admittedly killed her boyfriend, her testimony and whether prosecutors should be concerned about juror sympathy

PHOENIX – Jodi Arias' lawyer implored jurors on Friday to take an impartial view of the case and his client -- even if they don't like her -- as the murder trial neared an end after four months of testimony.

Arias smiled broadly when defense lawyer Kirk Nurmi told the jury during his closing arguments, "It's not about whether or not you like Jodi Arias. Nine days out of 10, I don't like Jodi Arias. ... But that doesn't matter."

Arias says she killed her one-time boyfriend Travis Alexander in self-defense, but prosecutors say it was an act of premeditated first-degree murder that could carry a death sentence or life in prison.

Jurors also have the option of finding Arias guilty of second-degree murder if they don't believe she planned the attack, but instead think it occurred in the heat of the moment. If convicted on that charge, she could face up to 25 years in prison. A manslaughter conviction carries a sentence of seven to 21 years.

Nurmi told jurors the entire case was about "fear, love, sex, lies and dirty little secrets" and repeated over and over that the prosecution's theory of a planned attack "doesn't make any sense."

The trial has become a tabloid and cable TV sensation and has attracted spectators from around the country who line up as early as 2 a.m. for a chance to score a few open seats in the courtroom.

Authorities say Arias, 32, planned the attack on Alexander in June 2008 at his suburban Phoenix home. They say she was enraged because he wanted to end their relationship and was preparing for a trip to Mexico with another woman.

Arias initially denied any involvement and later blamed it on masked intruders. Two years after her arrest, she said she killed Alexander in self-defense when he attacked her after a day of sex.

"Fear, love, sex, lies and dirty little secrets," Nurmi repeated several times Friday. "Each one of these aspects of the human condition plays a prominent role in the relationship that Jodi Arias shared with Travis Alexander."

He described Arias as a manipulative liar who meticulously planned the savage attack. Martinez said Arias lied from the start and is still lying, but that she hoped to fool the jury into believing she is the victim.

"That's what she wants you to believe," said Martinez, a photo of Alexander's dead body displayed on a large screen behind him.

"But actually, in reality, it's this," he said, motioning toward the autopsy picture.

The images displayed Thursday, one after another, of Alexander's decomposed body and the bloody scene of the killing were too much for Alexander's friends and family members. They sobbed and buried their faces in their hands.

"This is an individual who will stop at nothing, and who will continue to be manipulative and will lie at every turn," Martinez told jurors.

Alexander suffered nearly 30 knife wounds, was shot in the head, and had his throat slit. Arias' palm print was found in blood at the scene, along with nude photos of her and the victim from the day of the killing.

Arias said Alexander grew physically abusive in the months before she killed him, but there was no evidence or testimony during the trial to corroborate her allegations.

The defense has portrayed Alexander as a cheating womanizer who used Arias for sex and abused her physically and emotionally. Prosecutors depicted Arias as an obsessed ex-girlfriend who couldn't come to grips with the ending relationship.

Arias' grandparents had reported a .25 caliber handgun stolen from their Northern California home about a week before Alexander's death -- the same caliber used to shoot him. Arias was staying with them at the time, and the burglary occurred two days after the two exchanged text messages that indicated Alexander no longer wanted anything to do with her. Arias insists she didn't take the gun, but prosecutors say she staged the burglary to get the murder weapon.

Martinez told jurors that Arias had been stalking Alexander and arrived armed and unannounced on the day she killed him, sneaking into his home at about 4 a.m. The two went to sleep together, then awoke and had sex.

At some point, Martinez said, Arias decided it was time to carry out her murderous plan.

Nurmi told jurors on Friday the state's theory of the case is "nonsensical."

He pondered out loud: If Arias had planned the attack in advance, why not kill him right when she arrived at Alexander's home? Why leave a paper trail, starting with the police report from the burglary? Why rent a car instead of borrowing one from friends or family? Why use her debit card for gas and other purchases instead of cash?

"It doesn't make sense if you're on a covert mission," Nurmi said, adding Arias had numerous other opportunities to kill Alexander, including while he was naked and vulnerable in the shower.

"But she didn't," he said. "It doesn't make any sense if this was a premeditated murder."

Nurmi said his client is a liar. He acknowledged she has lied numerous times. But he explained to jurors she isn't on trial for lying.

"Nowhere, nowhere in your jury instructions are you asked to convict Jodi Arias of lying," he said.

Arias said she recalls Alexander attacking her in a fury after a day of sex. She said she ran into his closet to retrieve a gun he kept on a shelf and fired in self-defense but has no memory of stabbing him. There has been no evidence presented that Alexander owned a gun, and the weapons used in the killing have never been found. Arias said she disposed of the gun in the desert.