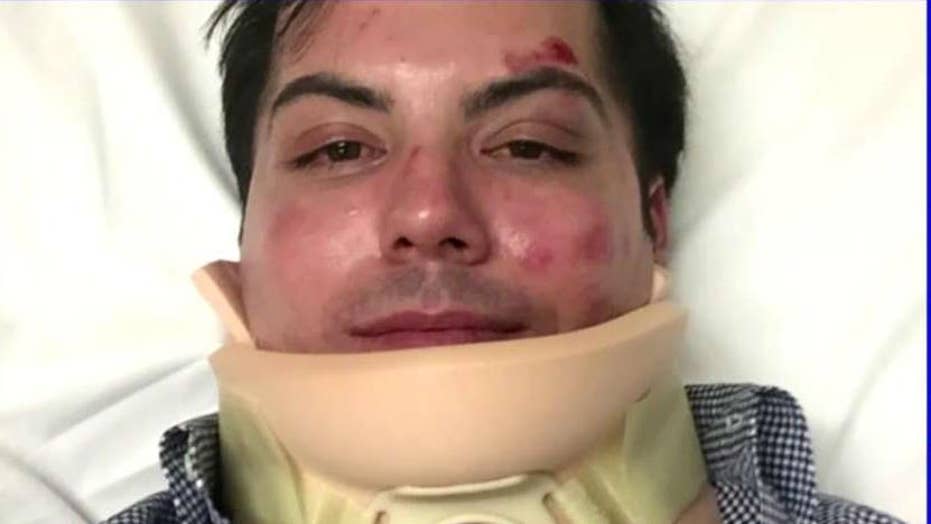 Authorities worked Wednesday to identify at least four people who attacked and robbed a decorated former Marine at a Washington, D.C. McDonald’s, leaving him in the restaurant unconscious.

Christopher Marquez, 30, an Iraq War vet, told the Washington Post he was eating in a back corner of the restaurant on Friday when a group of teens and young men approached his table.

"They saw me and crowded around ... and they started asking me if I believed black lives matter,” Marquez told the paper. “I was ignoring them, then they started calling me racist."

At that point, Marquez said he left the McDonald's, but was knocked unconscious by a blow to his head. When he came to, his pants were ripped and his wallet, which contained $400 in cash, three credit cards and VA medical card among other items, was missing.

DeAnthony Mason, manager of the McDonald’s, reviewed security footage and told Marquez that he was hit on the side of the head before the other teens converged on his body to take his belongings, The Daily Caller reports.

Credit card transactions reviewed by The Daily Caller revealed that Marquez’s cards later were charged more than $115 at a liquor store, Five Guys and a Walmart.

The teens involved in the attack were being sought by police for a previous incident, Mason said, according to Marquez.

But the D.C. Metropolitan Police told FoxNews.com Wednesday that they are still working to identify the four people in the video.

According to the Daily Caller, which first reported the incident, Marquez was able to take a cab back to his apartment, where building employees called police. He was treated at George Washington University Hospital for head trauma.

Marquez served in the Marine Corps from 2003 to 2011. He was awarded the Bronze Star with combat distinguishing device for valor during the battle for Fallujah, Iraq, in November 2004. Marquez is one of two Marines depicted carrying then-1st Sgt. Bradley Kasal out of the so-called "Hell House" in a famous photograph.

“When I was in the Marine Corps, I served with people from many different backgrounds, ethnicities, religions, and races,” Marquez told The Daily Caller. “Like all Marines, I fought for the freedom of all Americans and not just one particular group.”

Marquez made an unsuccessful 2014 run for Congress as a Democrat in California. He currently studies at American University in Washington D.C.

"I believe this was a hate crime and I was targeted because of my skin color,” Marquez, who is Hispanic, told the Daily Caller. “Too many of these types of attacks have been happening against white people by members of the black community and the majority of the main stream media refuses to report on it."