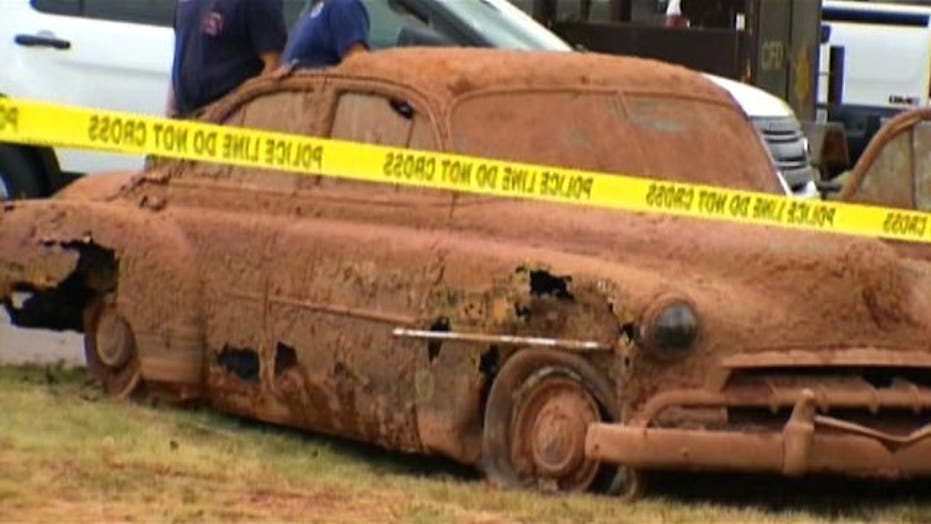 An Oklahoma sheriff says investigators are confident that one of two cars pulled from the bottom of an Oklahoma lake contained the remains of three teenagers who went missing in 1970.

One of the cars pulled from the lake, a blue Chevrolet Camaro, matched the description of a car in connection with the teens' disappearance, The Daily Elk Citian reported. The missing teens were Thomas Michael Rios, 18, Leah Gail Johnson, 18, and Jimmy Allen Williams, 16.

The paper reported that the three were supposed to be heading to a football game in a nearby town, but were never seen again. Some thought the three had stumbled across a drug deal at a rural airstrip and been killed. Others said they might have run away to California.

“The second vehicle is tentatively identified as the car with the missing juveniles from the Sayre area,” Custer County Sheriff Bruce Peoples told the paper. He told The Associated Press on Wednesday that investigators are still trying to determine whose remains were in the other car pulled from Foss Lake.

In both cases, those missing were believed to have been in an early-model Chevrolet like the one recovered Tuesday.

The state medical examiner's office said Wednesday it believes the remains of a total of six people were recovered. The Highway Patrol says three skulls have been recovered. It may, however, take years to identify the remains.

“There have been theories from everybody,” said Dayva Spitzer, publisher of The Sayre Record newspaper and a longtime resident. “Everyone suspected foul play. ... But every lead just went nowhere.”

Authorities discovered the cars by accident. Betsy Randolph, spokeswoman for the Oklahoma Highway Patrol, told the Associated Press dive teams were at Foss Lake conducting training with sonar when they came upon the vehicles last week.

"So they went back and did a scheduled dive today and were going to recover the cars. When they pulled the cars out of the water, the first one that came out they found bones in the car," she said.

The cars were submerged in about 12 feet of water and were only about 50 feet from the end of a boat ramp near a marina. But Peoples said it was no surprise that the murky waters held a secret.

“This lake isn’t crystal clear. It’s a typical western Oklahoma lake with a lot of silt in it. The visibility is only 6 to 12 inches on a good day,” Peoples said. “We’ll consider it a mystery until we prove otherwise."

The sheriff said it was entirely possible that people simply drove into the lake and drowned.

“We know that to happen, even if you know your way around. It can happen that quick,” he added.

Peoples said he was confident the Camaro held the remains of the three teens, who were identified as Leah Johnson, Michael Rios and Jimmy Williams. The origins of the bones in the second vehicle were less clear.

Tim Porter of Enid said he believed the remains could be those of his grandfather, John Albert Porter, who disappeared along with two other people in 1969.

“Forty-something years of wondering who or why,” Porter said. “If it is my grandfather in there, it’s a gift.”

The sheriff said Wednesday he was not sure whether the cars held the remains of five or six bodies. The state medical examiner’s office believed the remains of six people were recovered.

The bones were being sent to the medical examiner’s office for identification and to determine the cause of death.

Authorities hoped the discoveries would offer some relief to relatives who may have gone decades wondering about the fate of a missing loved one.

“We’re hoping these individuals, that this is going to bring some sort of closure to some families out there who have been waiting to hear about missing people,” Randolph said. “If that’s the case, then we’re thrilled.”