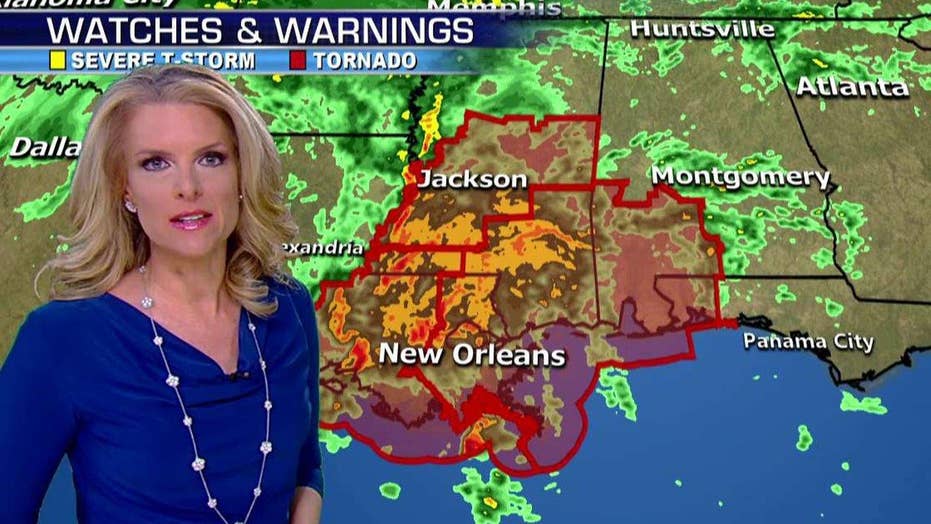 Dynamics in place for severe weather outbreak in the South

At least three deaths were reported Tuesday as a severe weather system spawned possible twisters and high winds in parts of the Deep South, authorities said.

Two people were killed and more than 30 others were injured after a suspected tornado tore through a Louisiana RV park, according to St. James Parish Sheriff Willy Martin Jr.

Lamar County Coroner Cody Creel identified one of those killed as 73-year-old Dale Purvis, who died of blunt-force trauma. The injuries came about 4 p.m. Tuesday, as the area southwest of Hattiesburg was under a tornado warning.

Martin told Fox 8 there were about 300 residents in about 160 trailers at the Sugar Hill RV park in Convent, La.

Damage after a tornado ripped through the Sugar Hill RV Park in Convent, La. (FOX 8)

Television footage showed several RVs overturned as emergency workers made their way through the rubble to reach victims.

"Emergency responders are on the scene and are assessing damage and injuries,” St. James Parish president Timothy Roussel said in a statement.

Acadian Ambulance said on Twitter that it had transported 31 patients to the hospital from St. James Parish.

Ken Graham said teams will be sent out in the morning to document the damage and rate the tornadoes.

Earlier on Tuesday, a suspected tornado caused some damage but no injuries near New Orleans' main airport as severe weather spawned possible twisters and high winds in parts of the Deep South, authorities said.

Emergency officials and the National Weather Service said the reported tornado was spotted near Louis Armstrong New Orleans International Airport in the suburban city of Kenner. It was believed to have touched down in a nearby field.

Ronald Myers lives across the street from New Mount Bethel Baptist Church, where and his wife are members. He told the Associated Press he recalled the sky darkening and high winds — he believes it was a tornado.

"My wife came over to turn the alarm off and she came back home and said, Baby, the wall behind the church has done fell down,'" said Myers. He said he struggled to keep his footing in the wind, and it nearly knocked his wife down: "I weigh 242 pounds. If it could move me, it was moving."

The storms were part of a line of severe weather rumbling across Southeast Louisiana. Severe weather watches were expected to last into the evening in the state.

In neighboring Mississippi, Gov. Phil Bryant declared a state of emergency, in anticipation of severe weather.

Authorities say at least one person has died after a possible tornado touched down in Mississippi.

Byrd said that officials are still sorting through reports of damage to some buildings.

David Cox, a meteorologist with the National Weather Service in Pearl, Mississippi, says forecasters spotted debris on the ground on Tuesday afternoon that is a typical hallmark of a tornado. Storm damage was also reported at a second location in the county that appeared to be caused by the severe storm system.

More than 6 million people in parts of five states — Louisiana, Mississippi, Alabama, Florida and Georgia — were in an area of moderate risk for a few strong tornadoes and other severe weather Tuesday, the Storm Prediction Center in Norman, Oklahoma, estimated.

Forecasters said about half of Alabama had a moderate risk of severe weather including tornadoes. On Tuesday afternoon, an emergency management official in west Alabama said a storm has knocked down trees and damaged at least one home near the rural town of Reform.

The storms began as a line of fierce thunderstorms moved across Texas, raising the risk of tornadoes, hail and damaging winds around several states, forecasters said.

The South Texas storms left thousands of people without power and windows broken after hail the size of golf balls damaged some buildings, but no one was injured after the bad weather Monday night, according to the Kinney County Sheriff's Office in that state.

In Alabama and Georgia, forecasters issued flash flood watches ahead of the storm system, which was expected to drop 1 to 2 inches of rain, with higher amounts possible in some areas. The warnings, which covered large parts of both states, were expected to be in effect through Wednesday afternoon.

In Arkansas, heavy rain, powerful winds and some snow were forecast for parts of the state Tuesday and Wednesday. The National Weather Service in Little Rock described the storm system as a "three-headed monster" on its Facebook page.

The National Weather Service said new rain on already saturated soil could cause roads to flood, as well as low-lying areas and small streams. The weather service projected that some of the heaviest rain would fall in metro Atlanta and in parts of the north Georgia mountains, where up to 3 inches was expected.

The Associated Pres contributed to this report.