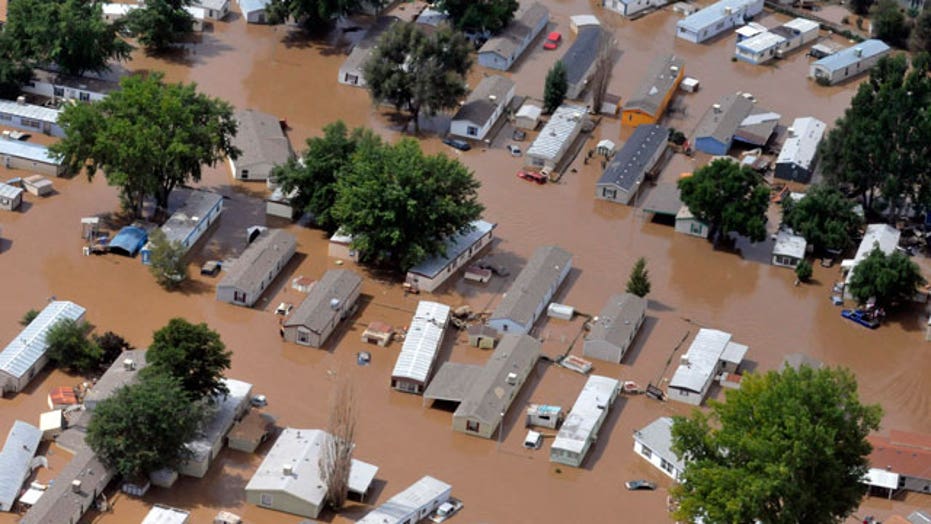 At least eight people have now been killed by deadly flooding in Colorado, while emergency officials went door-to-door Monday in a search for hundreds of people who remain missing.

A week of torrential downpours in the eastern Rocky Mountains has left a rising death toll and left as many as 658 unable to contact authorities or loved ones.

Rescuers grounded by weekend rains took advantage of the break in the weather on Monday to resume searches for people still stranded, with 21 helicopters fanning out over the mountainsides and the plains to drop supplies and airlift those who need help. Earlier in the day the helicopter crews -- flying out of Boulder -- were grounded.

The Federal Emergency Management Agency sent two 80-person search-and-rescue teams to assist with continuing rescues in Larimer County and providing aid to other communities following massive flooding that began Wednesday. Large military vehicles were attempting to get up the mountain roads.

Residents were encouraged to use white sheets, reflective mirrors, flares and signal fires to attract the attentions of the pilots and told to have a bag of medications, clothes, and other important items ready for when help arrived.

As of Monday afternoon, the Denver Post reported that 110 people had been evacuated from Larimer County, and officials expected to take between 300 and 400 more to Fort Collins. The Boulder County Office of Emergency Management told the paper that 183 people were still unaccounted for in the county, while 260 were still unaccounted for in Larimer County.

The confirmed death toll stood at four, with two women missing and presumed dead. State emergency officials reported the death toll at eight Monday — three dead in Boulder County, two in El Paso County and one in Clear Creek County, and two missing but presumed dead in Larimer County. However, local authorities said they had not raised the death count to seven.

Officials waded through the rubble in Glen Canyon on Monday, checking every structure in the town one by one.

Precise accounting of the missing remains elusive, with state and county agencies sometimes reporting conflicting totals. Colorado officials listed 1,253 people missing statewide at one point Monday and then updated it to just 658 later in the afternoon.

Most of the missing were in Larimer and Boulder counties, which lie north of Denver and are dotted with self-reliant mountain hamlets where privacy-conscious residents live in remote homes difficult to access even in ideal conditions.

Boulder County has assigned 10 police detectives to search for the missing. Officials are struggling to gauge how many people might actually be in danger as they field hundreds of calls from relatives, friends, estranged siblings and also near-strangers.

Rescuers and shelter workers are taking down lists of evacuees to feed to county officials, and people are asked to call in when they locate their relatives. Federal officials Monday repeatedly implored people affected by the flooding to call and reassure their loved ones.

In the funky mountain town of Lyons, stranded residents were unsure how to communicate their status. Telephone landlines were knocked out as floodwater rushed in Wednesday, and most people's cellphones died long ago.

One man drove with his young son past the shuttered shops on a muddy and abandoned Main Street searching for guidance.

"Do you need something?" shouted Glenn Scott, who was walking his two golden retrievers. It's become the town's new greeting

The man said he was looking for Federal Emergency Management Agency headquarters to let officials know the pair was OK so they wouldn't be listed among the missing.

But the only official seen around town that day was a local emergency worker telling residents it was their last chance to evacuate.

Most of the town's trailer parks were completely destroyed. One angry man was throwing his possessions one by one into the river rushing along one side of his trailer on Sunday, watching the brown water carry them away while drinking a beer.

Authorities made clear Saturday that residents who chose not to leave their flood-hit communities might not get another chance for a while. Rescuers won't go back for people who insist on staying, Boulder County Sheriff Joe Pelle said.

At one point Sunday afternoon, 51 Colorado National Guardsmen, first responders, and civilians had to be rescued when the tactical trucks they were riding in were halted by rising waters in Lyons. Thirty-six members of the group were picked up in helicopters by U.S. Army aviators before the weather turned bad enough to halt the rescue operation. The remaining 15, all first responders and Guardsmen, were waiting out the flood on higher ground, according to a statement from the Colorado National Guard.

The flooding has impacted parts of 15 counties in Colorado. According to early state emergency management office estimates, 17,994 homes have been damaged and 1,502 were destroyed along a 200-mile stretch of the Front Range.

Those preliminary figures are certain to change as the waters continue to recede and roads are cleared to allow crews to access more areas.

Residents of Hygiene returned to their small community east of the foothills Monday to find mud blanketing roads, garages, even the tops of fence posts. The raging St. Vrain River they fled three days earlier had left trucks in ditches and carried items as far as 2 miles downstream.

"My own slice of heaven, and it's gone," Bill Marquedt said after finding his home destroyed.

Residents immediately set to sweeping, shoveling and rinsing, but the task of rebuilding seemed overwhelming to some.

"What now? We don't even know where to start," said Genevieve Marquez. "It's not even like a day by day or a month thing.

"I want to think that far ahead but it's a minute by minute thing at this point. And, I guess now it's just help everyone out and try to get our lives back," she added.

Once the evacuations are complete, officials said it could take weeks or even months to search through flood-ravaged areas looking for people who died.

In the mountain towns, major roads were washed away or covered by mud and rock slides. Hamlets like Glen Haven were reduced to debris and key infrastructure like gas lines and sewers systems were destroyed.

Hundreds of homes around Estes Park, next to Rocky Mountain National Park, could be unreachable and uninhabitable for up to a year, town administrator Frank Lancaster said.