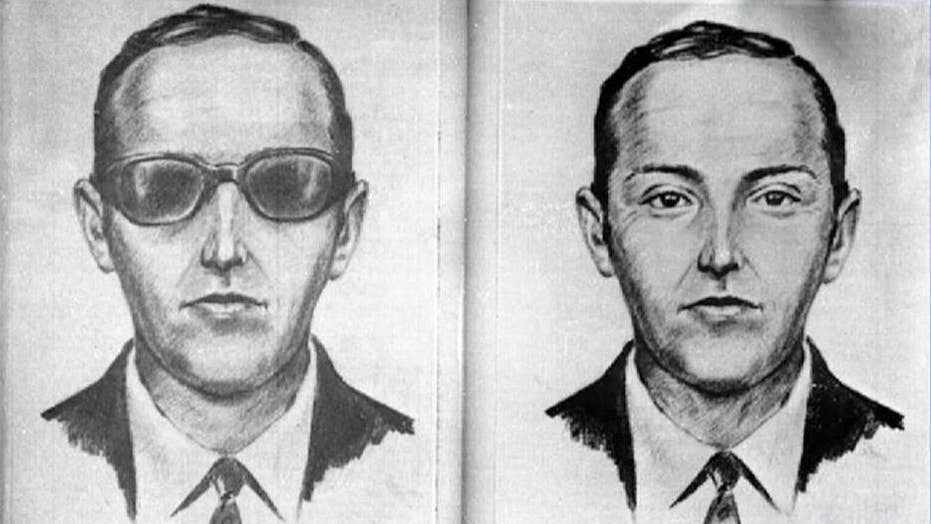 More than 45 years after a mysterious plane hijacker made off with $200,000 in ransom money, disappearing into the night sky, a publishing company believes it has finally identified the man who eluded authorities for so long.

While the publisher did not disclose whether Reca was still alive, an obituary online lists a man with the identical name who lived in Oscada, Mich., as having died in 2014 at the age of 80.

An FBI sketch of D.B. Cooper and Walter Reca during a rare visit home in 1984 during his clandestine years working in the Middle East. (FBI/Photo courtesy of Principia Media)

"Evidence, including almost-daily discussions over a 14-year period and 3+ hours of audio recordings featuring the skyjacker, was compiled by Reca’s best friend. It was then analyzed by a Certified Fraud Examiner and forensic linguist," the publisher said in a news release. "The audio recordings, created in 2008, include Reca discussing skyjacking details that were not known to the public prior to the FBI’s information release in 2015."

The publishing company worked with Laurin for the memoir "D.B. Cooper & Me: A Criminal, A Spy, My Best Friend.”

Vern Jones, CEO of Principia, talked about recordings that Laurin claimed were actual recordings of Reca speaking about the heist. Jones, a self-proclaimed skeptic at the start of the investigation, said that the evidence was “overwhelming.”

"D.B. Cooper &amp; Me: A Criminal, A Spy, My Best Friend", which claims Cooper was actually Walter "Walt" Reca from Michigan.

“We listened in Walter’s own words. We heard him talk about his motivations for the hijacking. (He) talked about the jump itself, what happened in the plane. Where he landed. How he got home -- and most importantly, why he wasn’t caught.”

Jones played one of the audio clips that described how Reca supposedly snuck the ransom note on the plane.

“Now where did you carry your note?” Laurin can be heard asking. “The inside pockets of the suit,” Reca replied. Laurin then asks what the note was about, to which Reca abruptly replies “I can’t remember right there, this is a hijack and I’ve got explosives.”

Water Reca as seen in Detroit in the mid-1970s. (Photo courtesy of Lisa Story.)

The rest of the audio clip describes the moments inside the plane when Reca was preparing to jump.

In addition to the tapes, Jones said they reviewed letters, official documents, photos and even a typed confession, all of which seem to corroborate Laurin’s theory that “Walter Reca is the real D.B. Cooper.”

Jones also seemed to hint that the discrepancies between Principia’s investigation and the FBI’s investigation might not have been accidental. “The hijacking,” he said “was just the beginning of the story.”

He detailed a supposed meeting between Reca and “two men in hard hats” two months after the heist where he was asked by these two unknown men if he was prepared to go to “prison.”  Reca was reportedly hired by them, though it is unclear if the two men Jones talked about were FBI agents.

Laurin himself spoke at the press conference and described Reca as a daredevil “who always wanted to be in the CIA.”

“I always got the feeling that when he jumped with our team, the Michigan parachute team, it was a means of survival, not really for the thrill,” Laurin said. “He was looking for something far beyond that.”

A flier for a Michigan Parachute Team event. The MPC was a group of young men who performed daredevil parachuting stunts. (Photo courtesy of Principia Media.)

In 1971, on the night before Thanksgiving, a man calling himself Dan Cooper, wearing a black tie and a suit, boarded a Seattle-bound Boeing 727 in Oregon and told a flight attendant he had a bomb in a briefcase. He gave her a note demanding money. After the plane landed, he released the 36 passengers in exchange for $200,000 in ransom and parachutes. The ransom was paid in $20 bills.

After the skyjacking, Reca later became a high-level covert intelligence operative, according to the publishing company.

Reca possessed skills to survive jumping out of the plane because he was on the Michigan Parachute Team, according to the publisher. He attended the team reunion in 2000 and was pictured in a photo released by the publisher.

Despite the claims of the publishing company, the FBI has never ruled out the possibility that the hijacker was killed in the jump -- which took place during a rainstorm at night, over rough, wooded terrain. The hijacker's clothing and footwear were also unsuitable for a rough landing.

Over the years the most lasting image of Cooper, who became somewhat of a legend, may be the two sketches the FBI released of the suspect.

Many investigators have come forward with their theories for who the infamous hijacker may be. Earlier this year, the leader of the private investigative team who has spent years trying to crack the D.B. Cooper hijacking case claimed he believes the mysterious criminal was a CIA operative whose identity has been covered up by federal agents.

FBI RELEASES 1971 LETTER THAT D.B. COOPER SLEUTH SAYS COULD BE FROM NOTORIOUS HIJACKER

Thomas Colbert, a documentary filmmaker who helped put together the 40-member team, said in January his team made the connection from work a code breaker uncovered in each of five letters allegedly sent by Cooper.