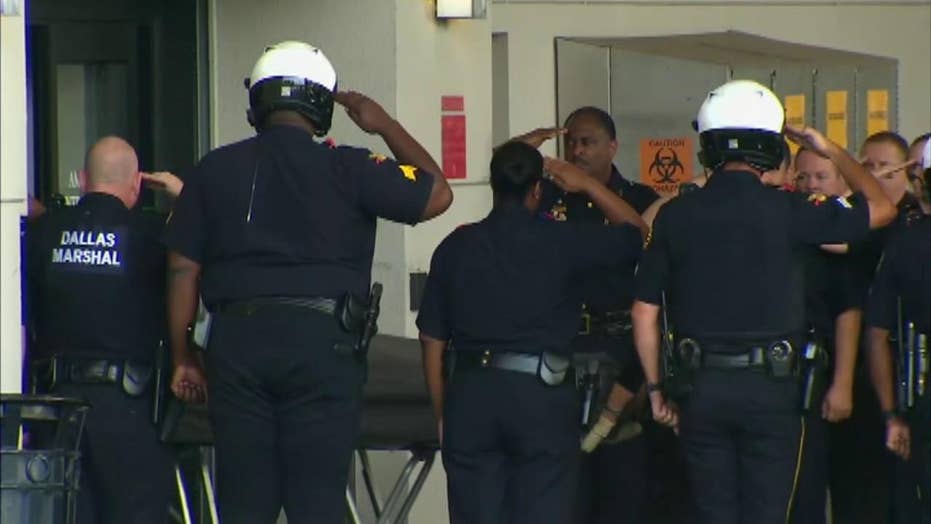 Texas officers line up at Baylor University Medical Center, waiting to transport the body of a Dallas police officer killed in a motorcycle crash.

A Dallas police union is blasting a local district attorney as a suspected drunken driver accused of killing an officer over the weekend gets out on bond.

Sr. Cpl. Jamie Givens, a 32-year veteran of the force, was killed early Saturday after a Kia Sportage struck him while he was blocking an entrance ramp on Interstate 20 as part of a funeral escort, police said. Adrian Breedlove, who was been charged with intoxication manslaughter and unlawful carrying of a weapon following the officer’s death, bonded out of jail the following morning, Fox 4 News reported.

“It is reprehensible that Adrian Breedlove, was given a $76,000 bail allowing him to spend less than one day in jail and post a bond of a mere 7,600.00,” Dallas Police Association President Mike Mata told the station.

The officer was doing a courtesy escort for fellow officer Tyron Andrews who died from cancer. Givens had been part of the motorcycle unit since 2012.

In statement, Mata added that the union is demanding to know “if District Attorney Faith Johnson asked a district court judge to require a more substantial bond for such a heinous crime.

“If she made no such effort then perhaps it’s time to find a District Attorney who takes more seriously the killing of police officers,” the statement added.

But Pete Schulte, an attorney not connected to the case, said to Fox 4 News that he viewed the bond as appropriate because of Breedlove has no criminal history and the death was non-intentional.

“There’s really no way for the district attorney to get involved in that process, it would be improper to do so,” Schulte said.

A candlelight vigil is scheduled Monday for Givens and his funeral is set for Thursday. Breedlove, who is 25, reportedly blew a blood alcohol level of 0.19 at the time of the crash, more than twice the legal limit, according to Fox 4 News.

Givens, 55, was transported to the Baylor University Medical Center where he was pronounced dead on arrival. The officer was stationary with his motorcycle's lights on at the time when he was struck "at a high rate of speed" by the car. All eastbound lanes on I-20 were closed following the crash.

In a separate interview with WFAA, Mata said the bond sends a message to police officers in the area “that [this] is what your life is worth.