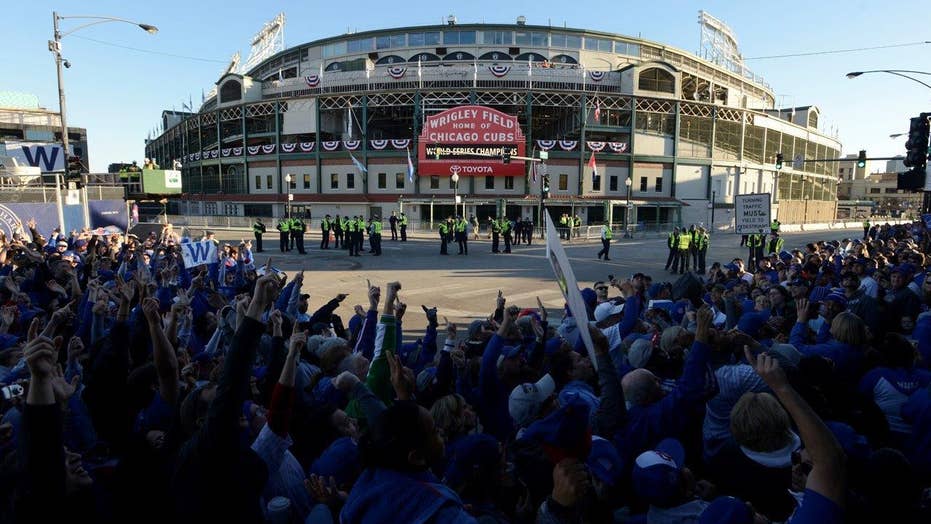 Most of the world has already moved on from the fabulous victory of the Chicago Cubs in baseball's World Series this year -- after a remarkable 108 years. Yet one man continues to thank God for all that he's been blessed with over the course of his life and career.

Ben Zobrist led the Cubs with 10 hits in the spectacular 2016 World Series -- and is the first Cub ever to snag the World Series MVP title. As the team's second baseman and a versatile switch-hitter, he also played in the outfield for the team during the playoffs.

It wasn't his first World Series, however. For those who don't know him well, Zobrist also won a World Series last year with the Kansas City Royals.

A deeply faithful person, Zobrist, 35, first told his story to the Fellowship of Christian Athletes (FCA) while he was with Tampa Bay a few years ago. The native of Eureka, Illinois, said his senior year of high school was a turning point for him -- both in his faith and in his career.

"I did a lot of questioning that year, trying to figure out where I was going in life," Zobrist told FCA. "I had a lot of anxiety that I had to release to the Lord. Finally I just said, 'You know what? I don't need any of this. I'd rather have peace. I'd rather trust God and let Him take care of it all.' And that's when everything started opening up."

Clay Meyer, editor of FCA Magazine, said when he first met Zobrist a few years ago he observed how this "quiet, unassuming guy was also deeply devoted to his faith and really a very biblically sound individual," Meyer told LifeZette. "It was very refreshing and amazing to watch such a good baseball player have such results both on the field and in his faith ministry as a sincere believer. Every chance Ben Zobrist gets to talk about his faith, he does. God put him in a position to win the World Series two years in a row and that has given him a platform to share his faith with so many others."

Zobrist is the son of a pastor -- his father, Tom Zobrist, headed up Liberty Bible Church in Eureka -- and once his high school years were over, Zobrist planned to attend a Bible college in Kansas City, Meyer explained. "He wasn't going to play baseball anymore. He was going to move on from that. That is, until his coach encouraged him to go to a local tryout. Scouts from Olivet Nazarene University saw him play and offered him a scholarship. So he played there for his first few years of college and then played at Dallas Baptist University in his senior year."

"I'm going to let God lead me where I should go," Zobrist said.

Faith has been poured into Zobrist in a variety of ways, Meyer emphasized, during his growing-up years, his attendance at two Bible colleges, and throughout his continued life's journey and success as a ballplayer.

"In his overall demeanor, he is approaching his life in the manner of, 'I'm going to let God lead me where I should go,'" Meyer said. "Even after he won a World Series in Kansas City last year, he and his wife were open to where God wanted them to go next [hence his move to the Chicago Cubs]. I think they're very prayerful in that way, and it all started when he was younger."

Zobrist's wife, Juliana Zobrist, is a successful Christian musician in her own right and is also the mother of the couple's three young children. "They have chosen to let God's will be done -- it's very compelling," Meyer said. He said the family has traveled with Zobrist throughout his baseball seasons to remain connected and devoted to each other through the many months of play. "They have made that commitment to one another and to their family's strength."

Zobrist is fully devoted to baseball from the time spring training begins in February, through to the end of the season in the fall -- yet he also makes time for important events run by the Fellowship of Christian Athletes. He will be speaking Monday evening at a major event the group is holding in Lawrenceburg, Tennessee, "which was booked months in advance of the World Series, but he is keeping to his original commitment to be there and will join us [on Nov. 14]," said Meyer.

The vision of FCA, as it explains on its website, is to see the world "impacted for Jesus Christ through the influence of coaches and athletes. [The] mission is to present to coaches and athletes, and all whom they influence, the challenge and adventure of receiving Jesus Christ as Savior and Lord and serving Him in their relationships and in the fellowship of the church. FCA's guiding values are integrity, serving, teamwork and excellence." The group was formed in 1954; its four "Cs" of ministry are coaches, campus, camps, and community.

Meyer said Zobrist is "the consummate professional and one of the hardest working guys" in baseball -- and a strong believer in team play. "His devotion to the Lord is surely one of the things that drives him, though he is not 'in your face' about it," added Meyer. "He's genuine and down to earth." Zobrist's quiet, deeply held faith is clear to all who know him.

"[God] is using the game to preach to my own heart, and show me where I need Him most, and where I still really have a need to allow the love of Christ to change me, change my heart," Zobrist told FCA earlier. "God is so patient. His love is steadfast, patient, and merciful."

The standout athlete added that he's "not any more deserving than anyone else." And he said with great humility and self-awareness, "I just want to grow in Christ."