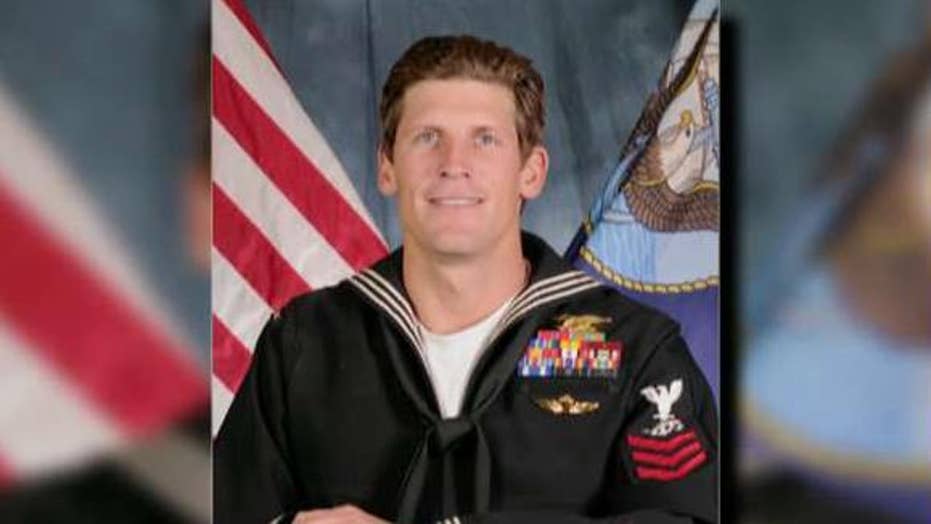 Navy SEAL killed by ISIS in Iraq 'died a hero'

Crowds of supporters, including retired Navy officers and families, lined the streets of the Southern California military town of Coronado on Friday to honor the Navy SEAL shot and killed by Islamic State fighters in Iraq.

Navy SEAL Charles Keating IV was the third service member killed in Iraq since U.S. forces returned there in 2014. Officials planned to transport his remains across a bridge to Fort Rosecrans National Cemetery in San Diego, where he would be buried as a chief petty officer, a rank he received posthumously.

The 31-year-old Keating, who grew up in Phoenix, "was a dedicated and professional SEAL, a true warrior," his Coronado-based SEAL Team 1 said in a statement.

"The legacy he leaves behind, for his fellow SEALs and for those who knew him, is unmistakable," the group said. "He died bravely, doing what he loved, and what he believed in."

The picturesque cemetery overlooking the bay to one side and the Pacific Ocean on the other is officially full, but officials have made exceptions for those killed in action.

At a memorial ceremony attended by more than a thousand people in Coronado on Thursday, Keating was posthumously awarded a Silver Star, the nation's third-highest combat medal, for his heroic actions during a March battle against Islamic State fighters in Iraq, said Lt. Beth Teach, a spokeswoman for the SEALs.

He also received a Purple Heart and Combat Action Ribbon for what he did the day he was killed. He was part of a quick reaction force that moved in May 3 to rescue U.S. military advisers caught in a gunbattle with more than 100 ISIS militants.

Shortly before his deployment, Charles Keating and Brooke Clark decided to quietly wed, and the couple was looking forward to holding a traditional wedding ceremony with family and friends in November, Teach said.

Keating was a former cross-country runner who served multiple deployments to Iraq and Afghanistan and was known in Arizona as a grandson of a financier involved in the 1980s savings and loan scandal.

For the procession carrying Keating's remains, thousands of students from the Coronado Unified School District planned to wave flags along nearly seven blocks leading to the Navy base.

"A lot of parents here have military ties so this is very important for us to support the military," the superintendent's executive assistant Maria Johnson said. "We've got a lot of parents on deployment. It's dear to our hearts."