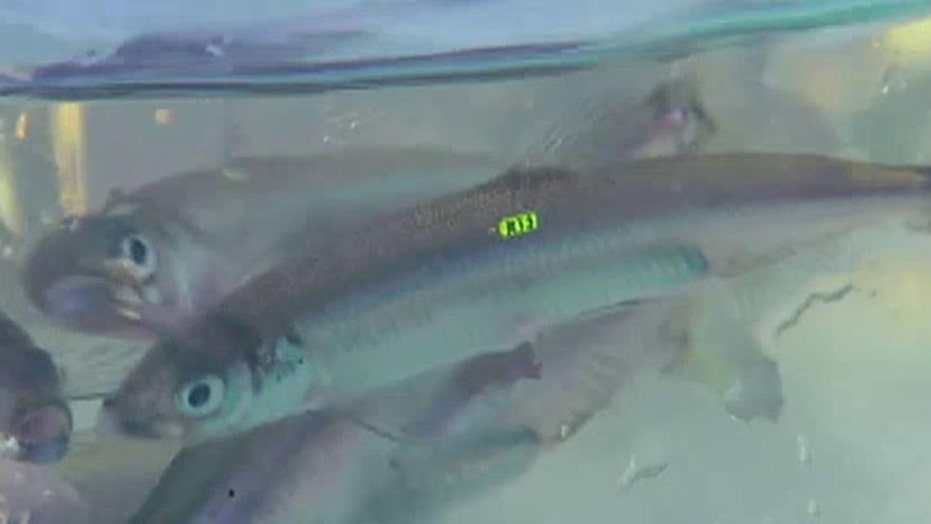 Even as it squeezes taxpayers to repair bridges and roads, cash-strapped California is planning a $15 billion water tunnel designed, at least in part, to save a tiny fish that may already be extinct.

The “WaterFix” Twin Tunnels project, championed by Gov. Jerry Brown but opposed by environmental groups and taxpayers alike, would bore 150 feet underground to the side of the Sacramento-San Joaquin Delta. The plan is to divert fresh water for thirsty farms and communities throughout the state without disturbing the habitat of protected species that live in the delta, including the finger-long delta smelt.

“To a large extent, this seemingly innocuous little fish controls much of what we can or cannot do in the delta,” said Robert Shibatani, managing partner and principal hydrologist at the California-based Shibatani Group International.

“To a large extent, this seemingly innocuous little fish controls much of what we can or cannot do in the delta.”

The 3-inch fish have protected status under the federal Endangered Species Act and are considered by the U.S. Fish & Wildlife Service to be a crucial barometer for the continued health of the West Coast water lands. They once thrived in the delta, which is the hub of the state’s water supply and is fed by the Sierra Nevada snowmelt carried to the Pacific by the Sacramento River.

The plan, a variant of one Brown pushed when he was governor in the early 1980s, would siphon off water without disrupting the flow of the river or harming wildlife. Three intakes would be built on the east bank of the river in the northern part of the delta, each with screens to keep fish like the smelt from being sucked in. They would feed two 40-foot-wide tubes, some 150 feet underground, that would carry the diverted water 30 miles away to pumping plants that then would push it into the canals that crisscross hundreds of miles of San Joaquin Valley farmland and cities as far away as San Diego.

Until now, the solution has been to largely let much-needed freshwater flow past parched farms and communities, emptying into the ocean. That strategy took a heavy toll on the state during the recent drought and often pitted environmentalists against farmers, communities and taxpayers. State officials believe the tunnel system is a fair -- if expensive -- solution.

“If we do nothing to modernize the water conveyance system in the delta, the trajectory of the past 40 years shows us that native fish populations will continue to decline,” Brown spokeswoman Nancy Vogel told FoxNews.com. “We would plunge deeper into the chronic trouble of the last three decades: more frequent water shortages, ever-lower populations of endangered species and, most likely, a return to expensive and unproductive litigation.”

It may be too late for the smelt, which are on or near the brink of extinction, according to a survey conducted by state biologists last year. The study found only six of the smelt in delta waters, where prior surveys netted hundreds.

University of California-Davis biologist Peter Moyle said a gradual drop in numbers was caused by upstream water diversion projects, but the four-year drought was the last straw.

"The probability of the delta smelt surviving in the next three years is relatively low. The chances of its bouncing back from where it is today seem very unlikely," Moyle, who has studied the fish for several decades, told National Geographic. "There are a lot of things going on simultaneously. Everything that stresses that poor fish is out there. The drought is the final straw."

Given the dire future of the fish, which is found in larger numbers in the San Francisco Bay, taxpayer and environmental groups are dubious of the expensive proposal. “Stop the Tunnels,” which bills itself as a statewide coalition of  businesses, consumers, environmentalists, fishermen, farmers, Native Americans and community-based organizations, charges the project will send water rates soaring while wasting much-needed infrastructure dollars.

It is one of several groups that have formed to fight the project. Another is California Water Impact Network (C-WIN), which claims the science behind the plan is flawed because, no matter how it is measured, it pulls water out of the delta.

“As such, it fails to achieve its purpose of conserving the delta ecosystem and recovering threatened and endangered species,” said C-WIN Director Tom Stokely. “The Water Tunnels will lead to the degradation of water for human use by millions in the region.”

Even environmental groups, such as Restore the Delta, believe the plan will benefit agri-businesses and few others.

“The people in Southern California will not receive additional water, yet they will end up carrying higher water rates and additional taxes,” Restore the Delta Executive Director Barbara Barrigan-Parrilla said.

And the online campaign “Delta Tunnels Action” contends that farmers will lose because the tunnels will leave them low-quality saltwater which will hurt their production as well as the inland environment.

Finally, taxpayers are dubious the bill will stop at $15 billion. Carolee Krieger, executive director of C-WIN, called the tunnel project “ruinously expensive for no new water”  and predicts the tab could reach $67 billion.

“The state is not telling the truth about the costs,” she argued, noting that besides the taxpayer price tag the project also could destroy the critical West Coast ecosystem. “The farmers in the delta itself have some of the most senior water rights in the system. They will be gravely harmed as they will lose their water.”

Critics say California already has the infrastructure and know-how in place to adequately hydrate the state without flushing more money down the drain, or into the ocean – but say policies that have been put in place in recent years to protect a handful of small Delta Smelt are driving the water crisis.

“The system is completely choked,” said Johnny Amaral, spokesman for Westlands Water. “The overarching problem creating the water shortages are the layers and layers of laws like these and for the last few years it has been easy for the government to blame the drought. The tunnels are not an economically viable project and they would not be needed if we used common sense. The government has spent the last decade flushing water out with the intention of saving fish, but they are no better than they were.”

There is no set deadline for when the project may be approved or tabled. The Water Board will start hearings on the state’s petition on April 7, and the hearings are expected to last several months. In addition, in coming months, the boards of directors for the public water agencies that are paying for the project must decide whether to continue to invest in the project, should it be permitted.

Meanwhile, proponents of the plan have offered up some additional benefits to consider, including that it would create more than 100,000 jobs while ensuring water delivery should an earthquake strike.

“There are some that argue we can assure adequate water supplies in California by investing in conservation, recycling desalination, storm water capture, etc. instead of new intakes and tunnels,” Vogel said. “We need all of that – as well as California WaterFix.”