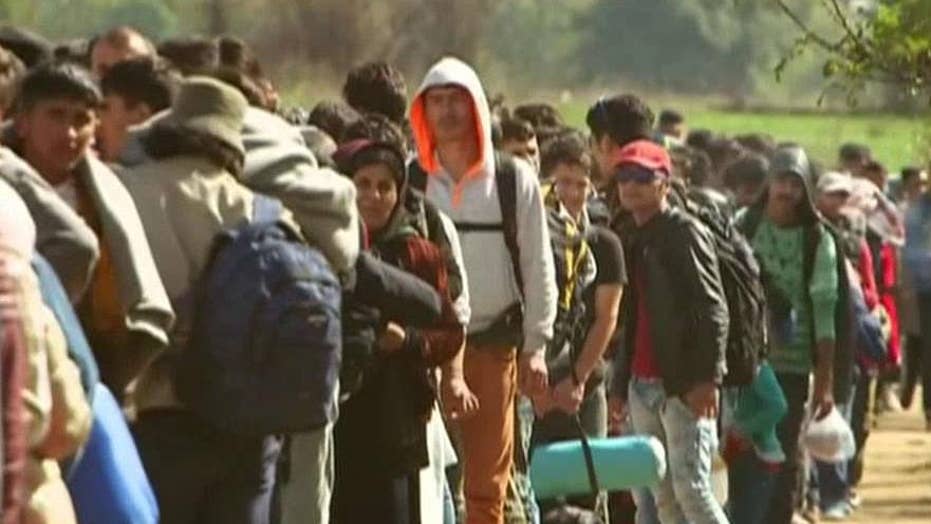 DHS allows over 8,000 Syrian refugees to stay in US

Zeze Rwasama's Idaho nonprofit gets $900 a head to meet Syrian refugees at the airport and help them adjust to their new lives in America, but some critics say the rush for federal tax dollars could put local communities at risk.

As director of the College of Southern Idaho Refugee Center, Rwasama is part of a broad network of contractors, faith-based organizations and charities working with the State Department to screen, transport and assimilate U.S.-bound refugees. They have played a vital role in bringing nearly 10,000 Syrian refugees to the U.S. over the last 12 months, a number slated to rise dramatically next year.

“We Americans are saving lives,” Rwasama, himself a Christian refugee from Rwanda, told FoxNews.com. “Because of my taxpayer dollars, they have a safe place to live.”

Critics of the vetting process say such organizations also have a duty to the unsuspecting communities into which they introduce potentially dangerous strangers. Several state lawmakers told FoxNews.com the government’s push to expand the program have created a taxpayer-funded gold rush that could expose cities and towns across America to crime and even terrorism.

Zeze Rwasama, director of College of Southern Idaho Refugee Programs, talks to a reporter in his office in Twin Falls, Idaho. (Associated Press)

Neither the FBI nor The National Archive of Criminal Justice Data keep statistics on refugee crime, refugees have been linked to a handful of crimes around the nation. They include the alleged rape of a special needs girl in Rwasama's town of Twin Falls, Idaho, and an alleged sex assault last month on a 13-year-old girl in a public swimming pool in Lowell, Mass.

Bryant, as well as lawmakers in New York and Nebraska, has drafted legislation that would hold contractors responsible when refugees commit crimes and it can be shown that they should have been denied entry under the program or flagged once here.

“We’re not trying to prevent refugee resettlement, but there needs to be accountability,” said Matt Slater, spokesman for State Sen. Terrence Murphy, R-N.Y.

Murphy is sponsoring a bill that would require contractors to fingerprint and monitor refugees receiving taxpayer dollars. The measure also would act as an alert mechanism for local officials who are often unaware of the federal distribution of refugees into their communities.

A Nebraska bill would require the nonprofits to reimburse local and state governments for court costs for refugee crime and carry a $25 million indemnity for civil lawsuits arising from the actions of refugees they help settle.

There are nine primary voluntary agencies who, with their affiliates and sub-contractors, participate in the screening, transfer and placement process of mostly Syrian refugees into the United States.

The pace of Syrian refugees entering the U.S. has surged in recent weeks, government figures show, putting the Obama administration on track to meet its target of admitting 10,000 Syrian refugees before the end of September. The numbers are expected to rise dramatically: According to the federal Department of Health and Human Services Refugee Resettlement Director Robert Carey, the administration is asking for $2.2 billion to resettle 213,000 new refugees including 100,000 Syrians over the next few years.

The U.S. effort is part of a much broader United Nations bid to resettle 480,000 Syrian refugees in Europe and the U.S. amid a civil war that UN High Commissioner for Refugees Filippo Grandi has called "the biggest humanitarian and refugee crisis of our time." Refugees from dozens of other countries in the Middle East and Africa have also poured into Europe through the sometimes chaotic effort.

The State Department and other agencies involved in vetting Syrian refugees say they are taking steps to speed up the process, including a "new pathway" for Syrians with relatives in the United States. Critics have questioned how Syrian refugees can be properly screened, given a lack of documentation in their homeland and virtually no cooperation between Damascus and host countries.

In the U.S., local lawmakers acknowledge their proposals are aimed at addressing an issue that begins far from their jurisdiction and ends in their backyards.

“We need to protect our people first,” Slater said. “If the federal government isn’t going to do it, the states need to step up.”

State Sen. Thomas Croci, R-N.Y., a former U.S. Navy lieutenant who served in various intelligence roles in both the Bush and Obama administrations, doubts that screeners in refugee camps abroad or contractors stateside can adequately tell who is a danger and who is not.

“I saw this in Afghanistan when someone would come to us giving their name and tribe and the Afghan partner standing next to me would say, ‘No way,” said Croci, a Republican. “There are small traits an American wouldn’t know. In Western nations, babies get a footprint, a Social Security number and, in some cases, even DNA. In places like Syria or Afghanistan you may never have contact with the government.”

“I refute the widely held view that we don’t have anything to vet against,” Rodriguez told reporters on a recent conference call. “The numbers that have been denied entry are large.”

Rodriquez later said 7 percent of prospective refugees are denied, and added that 99 percent who gain entry are Muslim.

The State Department oversees the refugee resettlement process, which is initiated by the United Nations High Commissioner for Refugees. According to the Department of Homeland Security website, Re-settlement Support Centers “conduct prescreening interviews and initiates biographic checks.”

Resettling refugees in the U.S. is costly, if not dangerous. According to a 2015 Center for Immigration Studies report, the cost per family is $257,481. That includes the screening effort, transportation, housing, payment to contractors and stipends that can top $1,100 per month while refugee heads of households find jobs. The figure does not include welfare and food stamps, which refugees are eligible for.

The race to bring in refugees and help them blend into communities around the nation is creating the wrong incentives for contractors, said Ann Corcoran, of Refugee Resettlement Watch.

“The U.S. State Department should not be head-hunting for industry,” Corcoran said. “The driving force is money, not humanitarian.”

Rwasama acknowledged the risk in bringing in refugees. But he believes the process employed in the U.S. is much safer than in Europe, where refugees move about more freely and have been directly tied to several acts of terrorism and crime.

“Yes, this program could bring in terrorists,” he said. “However, I don’t think a terrorist is going to use a program that takes 18 to 24 months or has contact with U.S. officials.”