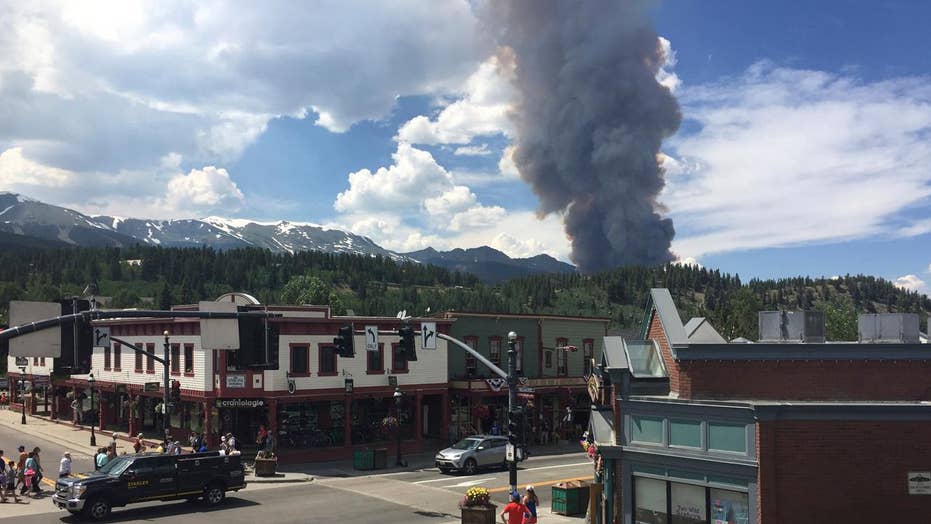 DENVER – Firefighters were working Thursday to keep a wildfire that's forced the evacuation of hundreds of people from spreading toward homes near Colorado's Breckenridge Ski Resort and the nearby historic town.

Crews were attacking the fire, burning about 2 miles (3.2 kilometers) north of the resort, by dropping firefighting slurry from the air as well as building containment lines on the ground to stop it from reaching nearly 500 evacuated homes. Insurance companies also paid to send contracted fire engines to the area to try to protect the pricey ski properties. Winds were calm Thursday but officials acknowledged that all their efforts to save properties could be undercut if winds shift.

The evacuees, including vacationers, were briefly allowed back to their homes to pick up items they were not able to grab before being told to leave as the fire blew up on Wednesday. The relatively small blaze quickly sent up a column of smoke visible from Interstate 70, Colorado's main east-west highway, and the 19th-century Victorian buildings in the town of Breckenridge, a onetime gold-mining camp. Residents in town have been warned to be ready to leave in case the fire spreads toward it.

Nebraska resident Sheila Calhorn was among those who had their vacations interrupted by the fire, discovered by a mountain biker near the Colorado Trail, a nearly 500-mile (805-kilometer) hiking and biking route through the state's mountains.

"We were down in Breckenridge and we looked outside, and people were all staring into the sky and you could see smoke just billowing up," she told the Summit Daily News in Frisco.

"This was supposed to be a stress-relieving vacation," she said.

The fire, consuming beetle-killed trees in the White River National Forest, is one of several burning in Colorado and elsewhere around the West.

Since the blaze broke out Wednesday morning, it has scorched less than a quarter of a square mile (.65 sq. kilometer) but has not burned any homes.

The base of the resort, which includes hotels, restaurants and businesses, was not evacuated.

In Washington state, a grass and brush fire burning in part on the Hanford Nuclear Reservation was 85 percent contained and is not threatening any of the site's nuclear facilities. It has burned about 36 square miles (93.2 sq. kilometers) in Yakima and Benton counties.

In northern Nevada, a fire official blames a wind shift for pushing a wildfire across at least one rural homestead property.

Truckee Meadows Fire Chief Charles Moore said Thursday that a team of firefighters narrowly escaped, but no injuries were reported when flames reversed Wednesday afternoon and headed toward homes in the Palomino Valley north of Reno.

Ken and Sue McGuire told KRNV-TV in Reno that they lost a house, a travel trailer where their son lived, sheds and vehicles as flames swept across their property.

About 500 people heeded an advisory to evacuate ahead of the nearly 5.5 square mile (14.25 square kilometer) blaze burning through grass and brush.

The fire is about 20 percent contained, Moore said, and a federal wildfire specialty team is due Thursday to join the battle.

In Arizona, the summer-retreat community of Summerhaven atop Mount Lemmon remained evacuated after a wildfire charred more than 38 square miles (98.4 sq. kilometers) in mountains and foothills overlooking Tucson. The wildfire started Friday, and its cause remains under investigation.