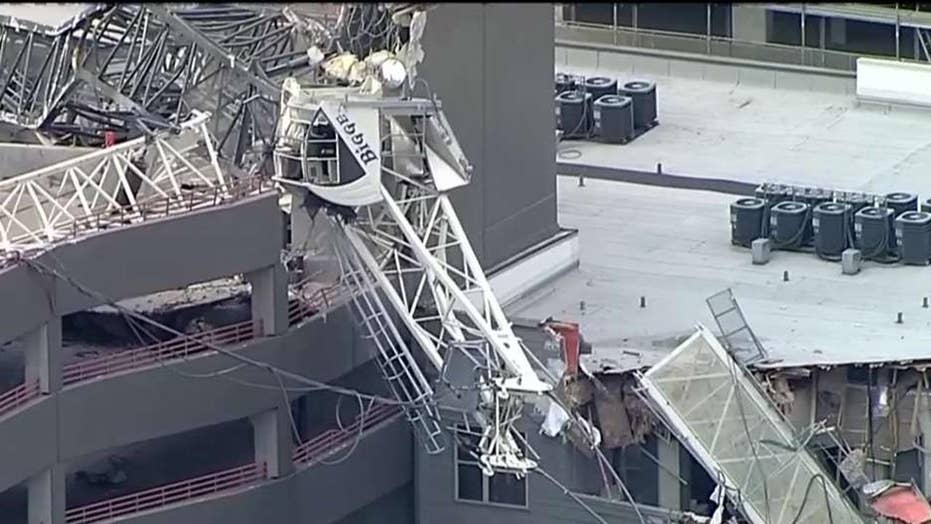 One dead after crane collapses in downtown Dallas

Six other people were injured, two of them critically.

A crane collapsed onto an apartment building in Dallas amid strong winds Sunday afternoon, killing one woman and injuring at least five other people, two critically, rescuers said.

"We only hope that what we've found up to this point is where the damage and where the impact stops," he said.

He added that the building was under construction, and he was unsure if anybody was currently working on it.

“There has never been a crane collapse onto an already inhabited building, as far as I know,” Evans told reporters.

Evans said "every single level of the parking garage in part has collapsed" and vehicles suffered damage.

Isaiah Allen, one witness, said he was in his apartment when he heard what he thought was a deafening thunderclap. "I saw that the crane had actually fell straight through the building and had destroyed a good eight to 10 apartments and so there's like floors and stuff falling through," he said.

Allen said he saw a bloodied woman trapped in her apartment on the second floor.

Video shows that downed crane ripped a large hole in the east side of the building and landed on an adjacent parking garage.

Rory Cashin, an eyewitness, tweeted: “Woke up poolside to a full-on tornado warning, which hit the construction site next to us and sent debris flying all over downtown Dallas. I think... I think I’m ready to come home now...”

The National Weather Service issued a severe thunderstorm watch for the greater Dallas/Fort Worth area until 7 p.m. Sunday, warning of heavy rain, damaging gusts and large hail. It also issued a flood advisory for parts of the region until 5 p.m.

The weather service said winds could exceed 70 miles per hour.