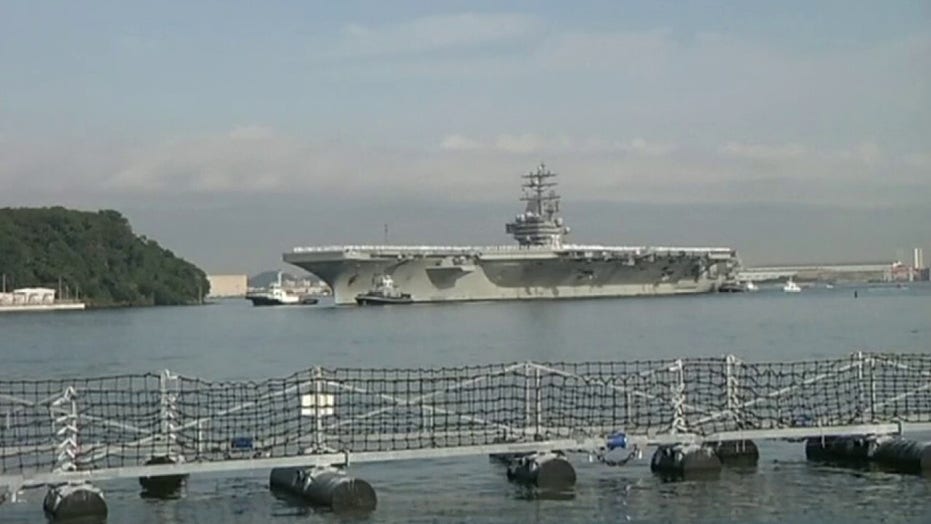 At least 30 sailors have tested positive on the aircraft carrier; Lucas Tomlinson reports.

There are now more than 30 cases of coronavirus aboard the aircraft carrier USS Theodore Roosevelt, Fox News has exclusively learned, as well as another aircraft carrier reporting infections for the first time onboard.

U.S officials say the number of cases on board is expected to rise in the coming days.  Three days ago, there were only three known cases onboard.

The aircraft carrier Theodore Roosevelt pulled into Guam about 12 hours ago (Friday morning local time). Despite the U.S. Navy’s top officer calling the port call “previously-scheduled" in a statement Thursday afternoon, a U.S. official says the carrier’s scheduled maintenance stop in Guam was “moved up a few days” because of the virus outbreak.

It's not clear if any of the aircraft carrier’s destroyer escorts also have the virus on board. On Thursday, Acting U.S. Navy Secretary Thomas Modly admitted testing is limited.

"I know the small ships don't have the ability to test onboard. It's my understanding that on the larger ships, we do have the ability to do some limited testing on board," Modly told Fox News’ Jennifer Griffin during a Pentagon press conference. "TR has approximately 800 kits onboard, we're flying more on there [Thursday] as we speak so they will have more brought in to help solve this problem."

About 30 percent of all known coronavirus cases in the U.S. Navy are aboard this one ship right now.

No pilots have reportedly been infected onboard the aircraft carrier Theodore Roosevelt.

US NAVY TESTING ALL 5,000 SAILORS ON DEPLOYED AIRCRAFT CARRIER IMPACTED BY CORONAVIRUS OUTBREAK

Officials say they expect the number of cases among the crew of 5,000 to grow in the coming days. Officials say it's impossible to keep the crew isolated at sea. There are not 5,000 staterooms on board. Only those showing symptoms will be tests, officials say. The Navy's top officer says the carrier is still able to complete her mission.

"We are taking this threat very seriously and are working quickly to identify and isolate positive cases while preventing further spread of the virus aboard the ship. No Sailors have been hospitalized or are seriously ill,” Adm. Mike Gilday, chief of naval operations, said in a statement Thursday.

Fox News has also learned another aircraft carrier in the region has reported cases of the virus on board. The USS Ronald Reagan, currently in port in Japan, has two sailors on board that have tested positive.

The new positive cases have forced the entire naval base outside Tokyo, where Ronald Reagan is based, to be locked down through the weekend.  Everyone on the base has been told to remain indoors for the next 48 hours, officials say.

The Pentagon says there are now 309 cases of Covid-19 in the U.S. military, with 29 new cases reported Friday.  On Thursday, the Pentagon said there were 73 new cases in the ranks, a sign the growth of the virus has slowed in the past 24 hours.