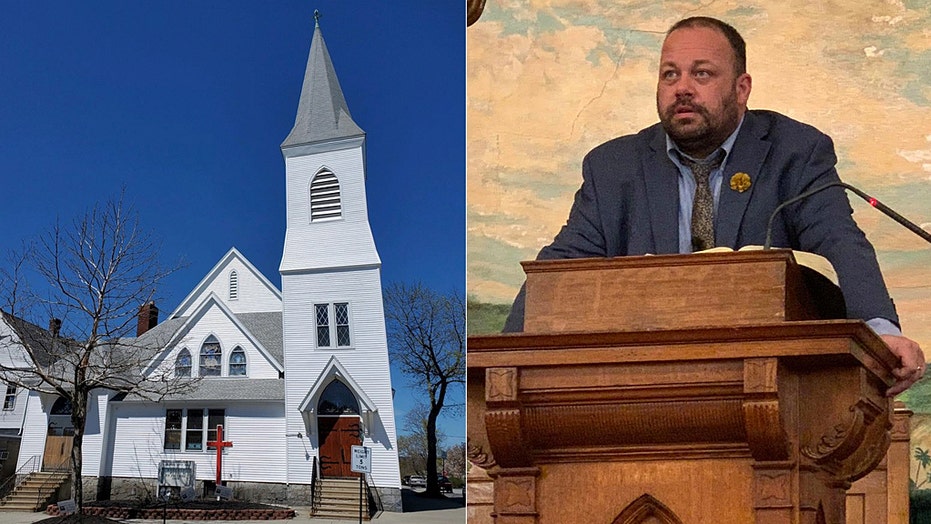 The pastor of a Massachusetts church was slapped with a $300 fine for holding an in-person service amid coronavirus state restrictions and says his family is now facing death threats.

Kristopher Casey, pastor of Adams Square Baptist Church in Worcester, waved an American flag after Sunday's service while his congregation sang "God bless America." Casey explained his sanctuary has been deep-cleaned, a process that costs thousands of dollars, before services, and congregants must wear masks and gloves at all times, Casey said.

"The Constitution and the Bill of Rights don't go on vacation when there's a pandemic. We are protected as a church, and yet the big box retailers are not protected and yet they are still open," Casey told Fox News. "The Bible tells us to forsake not the fellowship of one another together, and in Acts 5:29 it says, 'I'd rather obey God than man.'"

He added, "The treatment they're giving us is not fair and that's why I'm taking a stand."

Police tracked approximately 40 people leaving the church, which seats more than 300, on Sunday, in violation of the state's ban on gatherings of 10 people or more, WCVB reported.

"We're really, just disappointed, that quite frankly ... he and the folks who attended those services would be themselves at jeopardy and put their community at jeopardy," Ed Augustus, Worcester city manager, said at a press conference.

The Adams Square Baptist Church in Worcester, Mass., has a sign that says, "Church is essential," as state city officials issue fines and threat of jail time to the pastor. (Courtesy of Kris Casey)

"This is real and real people are dying of COVID-19," Worcester Mayor Joseph Petty added. "And they're getting it from someone."

The pastor called Gov. Charlie Baker's threats of fines and jail time "an intimidation tactic on our right to have a church." He said the small, inner-city church is spending more than any other church just to prove a point and go "well above reproach" in following CDC guidelines.

“People are excited about someone standing up and protecting our rights,” Casey added. “It’s not just Baptists. It’s rabbis and priests. It’s bishops. It’s people from all over America calling me and saying, ‘Thank you for taking a stand. I stand behind you.’"

But there have been critics, too. Casey said his family received death threats after his name was mentioned at a city council meeting. People said they hoped the family would die from COVID-19 for holding services, he said.

The Baptist pastor, represented by Christian Law Association laywer David Gibbs, plans on getting fined $500 for holding a Wednesday service.

"We'll see if I get arrested or not on Sunday," Casey said. "If we allow the government to shut down the light of Jesus Christ, America will go dark spiritually and we may never return."