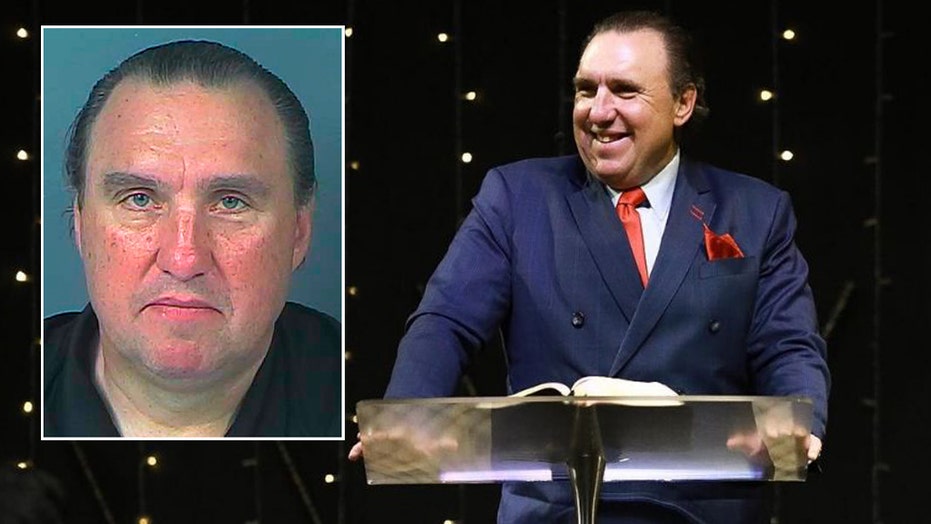 Florida megachurch pastor Rodney Howard-Browne is defending himself after he was arrested for holding services Sunday in defiance of government orders aimed at curbing coronavirus.

LAUREN GREEN: CORONAVIRUS CRISIS -- WHY SOME CHURCHES ARE DEFYING BANS ON GATHERING

"The sheriff and Hillsborough County will get a lesson on the Constitution and discriminatory application of the law," Mat Staver, Liberty Counsel founder and chairman, told Fox News.

Rodney Howard-Browne, the pastor of The River at Tampa Bay Church, was arrested Monday after holding crowded services in defiance of government officials amid the coronavirus outbreak. (Hernando County)

Chronister issued an arrest warrant and immediately held a press conference as the pastor turned himself in to authorities Monday in Hernando County, where he lives. He was released 40 minutes later after paying a $500 bond.

The sheriff, joined by State Attorney Andrew Warren and Bishop Thomas Scott, made it clear: "We're hoping that this serves as a deterrent."

"Sheriff Chad Chronister’s press conference was a shaming spectacle full of anger, lacking of facts, complete with a theological lecture about the Bible," Staver said. "This over a second-degree misdemeanor before the arrest occurred."

Liberty Counsel argued in a press release that Hillsborough County's orders issued March 20 and 27 included exemptions and exceptions used by  businesses that also should apply to the church.

Staver said Howard-Browne and his Tampa church took "extra precautions" and went "above and beyond" to be in "full compliance with the administrative order which allows any business to operate under the 6-foot restriction," Staver argues.

The River Church is shown Monday, in Tampa, Fla. The Hillsborough County Sheriff's Office has warned the megachurch about violating a safer-at-home order in place to limit the spread of coronavirus. (AP Photo/Chris O'Meara)

In addition to following the 6-foot rule, the church staff wore gloves, gave every person hand sanitizer as they entered, and spent $100,000 on a hospital-grade system that provides "continuous infectious microbial reduction (CIMR) that is rated to kill microbes, including those in the coronavirus family."

The sheriff said his command staff met with church leaders ahead of Sunday's services to warn them about endangering the congregation. The sheriff's office also placed a digital sign on the road near the church driveway that said "practice social distancing."

“Shame on this pastor, their legal staff and the leaders of this staff for forcing us to do our job. That's not what we wanted to do during a declared state of emergency,” Chronister said.

But Howard-Browne argued on Twitter that the church is an essential business and also attacked the media for “religious bigotry and hate.”

The Tampa pastor isn't alone in refusing to curtail in-person worship services, despite public health orders designed to stop the virus from spreading.

Churches in Ohio, Kentucky and Louisiana have contiunued services as several states offer some degree of exemption for faith in their orders to shutter nonessential activity during the pandemic.

On Friday, New York City Mayor Bill de Blasio threatened to shut down any houses of worship that defied the state's stay-at-home mandates.