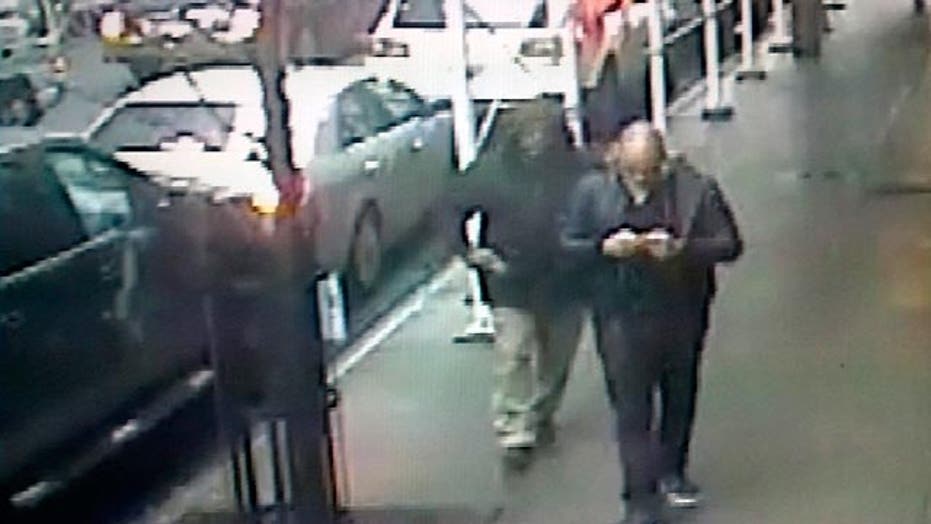 Bill Daly and Tom Ruskin on what they call a deliberate, planned and personal attack on NYC Street

NEW YORK – Police have reportedly detained a suspect in connection with the execution-style murder of a Los Angeles man in broad daylight in New York City.

The New York Post reports that the man was taken in for questioning in Queens, New York. The suspect is one of several persons of interest.

Earlier on Wednesday, police found the getaway car linked to the slaying of Brandon Lincoln Woodard.

Police Commissioner Raymond Kelly said Wednesday that the car has been found in Queens.

Police officials in New York say they are in touch with authorities in Los Angeles as they try to get a clearer picture of why anyone would have wanted to Woodard dead.

Woodard was shot in the back of the head Monday afternoon after he checked out of a hotel on nearby Columbus Circle.

New York investigators are examining three phones carried by Woodard when he flew to New York City on Sunday.

Who shot Woodard in the back of the head and why remained a mystery on Wednesday as police studied security videotape of the unidentified gunman and delved into Woodard's checkered past for clues.

The brazen murder of the 31-year-old visitor "certainly appears to have been planned," Kelly told reporters.

Based on the videotape, New York Police Department detectives suspect Woodard was lured into the Monday afternoon ambush shortly after he checked out of his midtown Manhattan hotel, Kelly said.

The killer had arrived at least 30 minutes before the gunfire erupted in a normally safe neighborhood teeming with car and pedestrian traffic. The man, who appears to be bald and have a beard, could be seen exiting the passenger side of a parked Lincoln sedan and pacing as he waited, police said.

After Woodard got there, he checked his phone and walked back and forth as if looking for an address, police said. When the shooter approached, Woodard appeared to look back at him for a split second. He looked away again after "showing no sign of recognition," Kelly said.

A security photo -- released to seek the public's help in identifying the gunman -- shows him reaching into his pocket for a pistol moments before he fired a single deadly round.

Afterward, the shooter left Woodard in a pool of blood on the sidewalk, slipped into the same Lincoln sedan and was driven away. Before being recovered in Queens, a vehicle fitting the description of the sedan was last seen going through the Midtown Tunnel.

Ballistics evidence pointed to a possible lead: The 9-mm. semiautomatic used to kill Woodard was the same weapon used last month to shoot up the outside of a home in Queens where nobody was hurt. Police also recovered two phones carried by the victim.

Investigators were still trying to determine what Woodard -- who checked into his hotel on Sunday after flying in from California on a one-way ticket -- was doing in the city. Kelly said he has been described as a promoter but had no further details.

Kelly declined to comment on news reports that Woodard's mother ran a mortgage business in California that was mired in litigation and other troubles.

Sandra and Rodney Wellington, the mother and stepfather of Woodard, released a statement Tuesday urging anyone with information on the killing to contact New York City police detectives.

"There are no words to express our shock and sadness in the face of our family's horrendous tragedy. We eagerly await justice for Brandon," the statement said.

They described him as a "gentle and generous young man," a devoted father and loving son who loved sports.

Authorities in Los Angeles and Las Vegas confirmed that Woodard had a history of run-ins with the law in both places.

Woodard was due back in court on Jan. 22 following his arrest by LA County sheriff's deputies in West Hollywood in April on a felony cocaine possession charge. He had previously pleaded not guilty.

Court records show that in December 2009, Woodard pleaded no contest in the Los Angeles suburb of Torrance to a misdemeanor charge of hit-and-run driving. He was sentenced to three years of probation and a day in jail. However, his probation was terminated in January 2011.

In 2008, he pleaded no contest to two misdemeanor charges of grand theft of property. Prosecutors said he stole items on Feb. 26, 2008, from two upscale markets -- a Whole Foods Market and a Gelson's -- in Beverly Hills. He was sentenced to nine days of jail and 200 hours of community service.

Woodard also was issued a misdemeanor battery summons in September 2004 after a backstage scuffle with a security officer at a concert at the Mandalay Bay resort on the Las Vegas Strip.

The records show Woodard failed to appear in Las Vegas Justice Court in October 2004 and a warrant was issued for his arrest. He was arrested in April 2008 in Las Vegas, based on the warrant. After pleading guilty, he was given credit for time served and released.