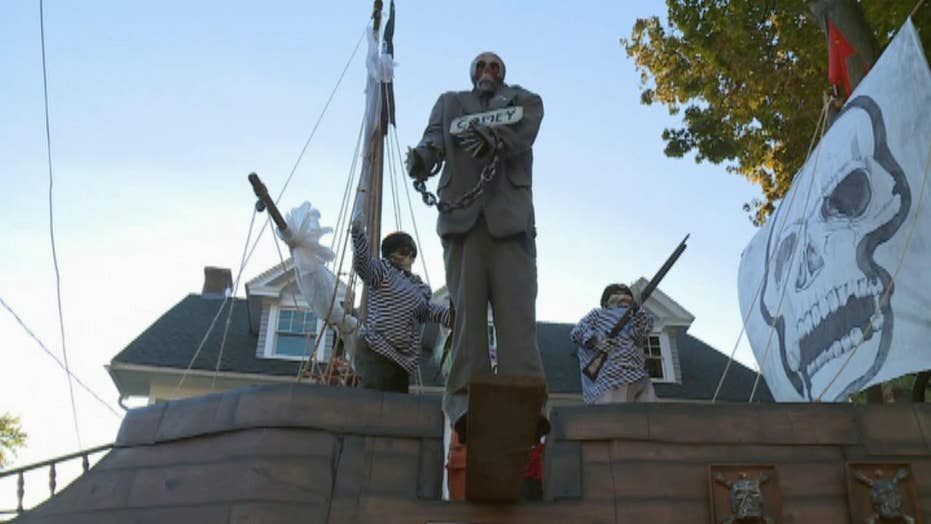 Halloween is just a few weeks away, and one Connecticut homeowner has chosen to turn the display in his front yard into a political message knocking President Trump.

A Connecticut homeowner has turned his Halloween display into a political message. (FOX 61)

Matt Warshauer, a history professor at Central Connecticut State University, told FOX 61 his lavish displays went from traditional to political around the start of the Iraq War.

“As a historian one of my goals is always to educate people and try and at least begin conversations,” Warshauer said.

In addition to skeleton portrayed as ex-FBI Director James Comey walking the plank, the display includes a child with a DACA sign appearing to be ready to be thrown off the ship, a nod to the debate over what to do with the young illegal immigrants often called "DREAMers."

“The day after the election last year I thought, the American ship of state has gone horribly off course,” Warshauer told FOX 61. “It's a pirate ship because Trump and most of his cabinet and people surrounding him are pirates who are pillaging this country.”

In addition to the main ship, there's also a smaller rowboat on his lawn with a depiction of President Abraham Lincoln holding a sign which reads, “What’s become of my party?”

The Halloween display depicts the Trump administration in a pirate setting. (FOX 61)

The professor said he hopes the Halloween display sparks conversation, and has already attracted a crowd since going up.

“If it gets people talking and more people are more educated about the ins and outs of what's going on in our system, I think it's a great thing,” passerby Bobby Holloway said.